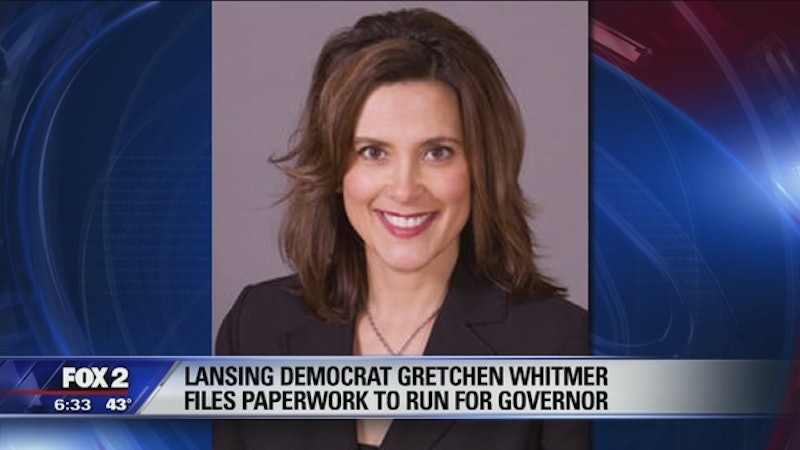 If you're shocked and saddened by the outcome of the 2016 elections, now is the time to look toward 2018. Yes, while the 2020 presidential election will be a big deal, 2018 is an opportunity to effect change on a more direct level within the states. In the hopes of encouraging as many as women as possible to enter into government races, I'm highlighting one women to watch. On Tuesday, Gretchen Whitmer announced her candidacy for governor of Michigan for 2018.

Whitmer is hoping to fill the seat of current Republican Gov. Rick Snyder, whose term limit will be up in 2018. According to the Detroit Free Press, Whitmer served as a Michigan state representative from 2001 to 2006 and then as a state senator until 2014. Most recently, she served for six months as interim prosecutor in Ingrahm County, according to the Detroit News, following the former prosecutor's conviction on prostitution-related crimes, finishing up her term at the end of 2016.

In 2013 on the Michigan Senate floor, Whitmer bravely shared that she had been raped 20 years before. The story served as an argument against a proposed bill that would ban state insurance plans from covering abortion and require women to purchase a rider to have an abortion covered. Although the bill ultimately passed, it's encouraging that Whitmer fought to block it and stood up for women in Michigan.

She's also spoken out on the state's handling of the Flint water crisis. In an editorial printed in the Richmond Times-Dispatch, Whitmer wrote,

There are questions that must be answered and those responsible must be held accountable. The situation demands nothing less.

But while leaders inside Michigan’s Capitol must commit to the long-term efforts to repair the damage that has been done to Flint, they must also recognize the need to repair the shattered trust in state government for those who justly feel betrayed by it.

That process will be measured in years, if not lifetimes, but is one that can begin immediately by ending the secrecy in which Michigan’s government has been allowed to operate.

She also revealed that Michigan is one of just two states that shield the governor and legislature from the Freedom of Information Act, which is very alarming, especially thinking about the information pertaining to the Flint water crisis that the public and reporters are not privy to because of the law. That she is advocating for more government transparency is heartening.

Whitmer is the first politician in Michigan with formal plans to run for the office of governor. Although she has not made a formal announcement other than an email to her supporters, Whitmer filed the paperwork Tuesday to the Secretary of State so she could set up a committee to run. This will allow her to begin accepting financial contributions to her campaign, according to the Detroit Free Press.

Hopefully Whitmer is just one of many women to decide to run for office in 2018. They need our support in order to get more female representation in government and prevent harmful women's health laws from being proposed and enacted in the future.