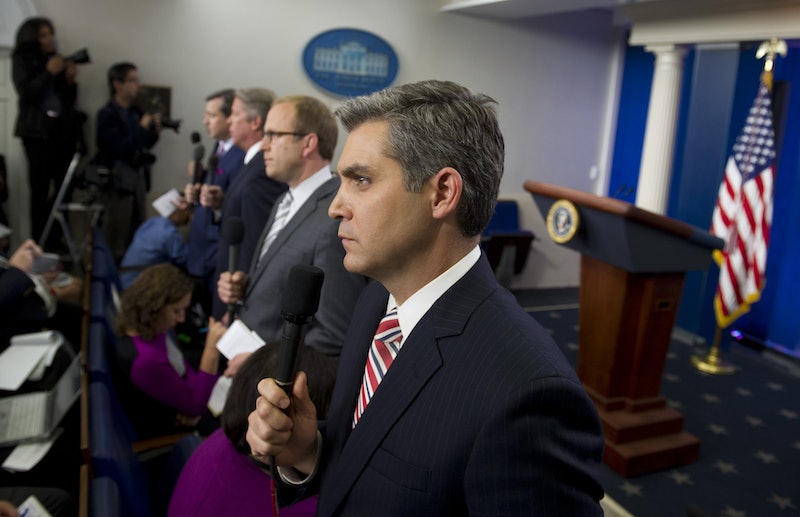 The Wednesday morning press conference with President-elect Donald Trump was his first since he was elected in November. The most tense exchange occurred between Trump and CNN reporter Jim Acosta, who attempted to ask a question after Trump went after CNN for “going out of its way to build… up” the leaked intelligence report that suggested Russia had damning information it intended to hold over Trump’s head.

Acosta pushed hard to get his question answered, saying, “You are attacking our news organization, can you give us a chance to ask a question, sir?” but Trump refused.

“Your organization is terrible,” Trump said in reply. “You are fake news.”

This isn’t the first dust-up between Acosta and Trump. In May 2016, Trump singled out Acosta as “a real beauty” (meant sarcastically), and began his full-on attacks of the media. Later in the campaign, Trump crowds would shout “CNN sucks” at Acosta, and at one rally, he was reportedly attacked when a woman at a rally hit him with her sign.

The apparent animosity between Trump and CNN’s Senior White House correspondent poses a thorny problem not just for the cable network, but for all other media organizations covering Trump, too. Even if Trump doesn’t employ the same draconian tactics as President that he used as a candidate and physically bar certain news outlets from covering him, if Trump refuses any questions from Acosta, should CNN replace him?

It’s tricky: on the one hand, if CNN has a reporter who can’t get the access needed to do his job, is he doing a disservice to his company and their viewers? On the other hand, if all Trump has to do to get rid of a reporter who is following an uncomfortable line of questioning is refuse to take questions from them, does that give him a free pass on answering to anyone who is less than glowing towards him?

Acosta is a veteran at CNN, having been with the network for nearly ten years. He has covered the War in Iraq, hurricane Katrina, and the presidential campaigns of John Kerry, Barack Obama (2008) and Mitt Romney. Still, he may face his greatest challenge yet covering the 45th POTUS — following their dust-up, incoming press secretary Sean Spicer warned Acosta he’d be chucked from the press conference if he pushed for another question.

In the short term, major news outlets seem to have one another’s back — an ABC reporter asked Trump the question that Acosta had attempted — but as we prepare for four years of rancor between the press and the president, the philosophical questions will run deep.