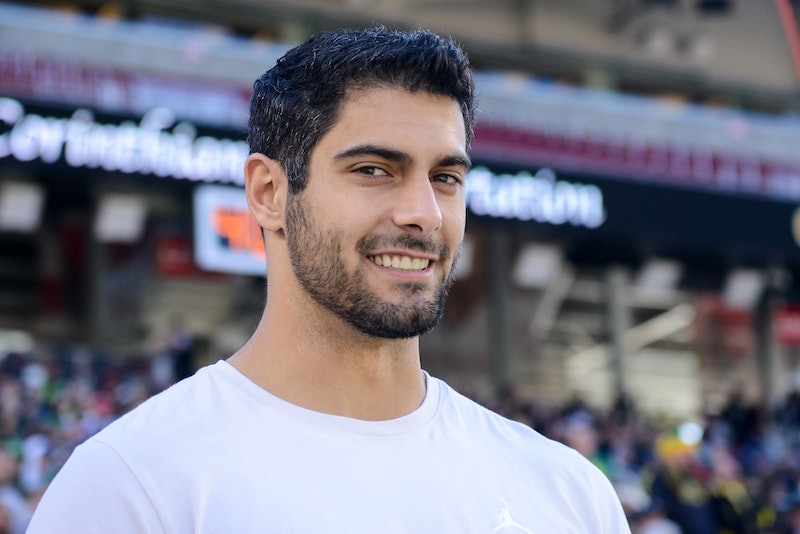 If you're not watching the Super Bowl for the football, and you're not watching it for the ads or the halftime show, odds are you're watching it for the athletes, which means you really want to know who Jimmy Garoppolo is dating. The 49ers quarterback has been linked to several public figures in recent years, and yet, seems determined to keep his romantic life private despite the spotlight of arguably the biggest sporting event of the year.

In February of 2018, Garoppolo was linked to model Alexandra King after the two were spotted together at Disneyland, according to Just Jared. King and Garoppolo continued to date for several months, and the couple were photographed kissing on a date in San Jose, California, in July of 2018. However, the two seemed to part ways soon after, as that same month Garoppolo was spotted at dinner with Kiara Mia, an adult film star. Though they didn't speak publicly about their romance, after the quarterback tore his ACL in 2018, King reportedly wrote "Karma" about Garappolo's injury on her Instagram Story, according USA Today, hinting at a bad breakup.

Later, Garoppolo reportedly regretted making his romantic life public, and noted that he planned to keep his life more private moving forward, according to The Mercury News. "Life is different now," he reportedly said. "My life, off the field, I’ve never really been big on being very public with things even on social media. I’m not on there a ton. But my life’s looked at differently."

Back in 2018, Garoppolo refused to comment on his romantic life in a profile with Bleacher Report. The rising football star did reveal that Tom Brady and Gisele Bundchen once set him up with a model friend of theirs on a double date, but Garoppolo didn't hit it off with the potential match.

Despite becoming more private, the 49ers star has not opted out of social media entirely, but a casual glance at Garoppolo's Instagram shows he's not really interested in sharing anything personal. Instead, his updates remain predominately professional. Once in a while, however, he will offer fans a glimpse at his life off the field. In May of 2019, Garoppolo gave a peek into his family life. He shared a tribute to his mother on Instagram, writing, "How you raised us 4 boys, the world may never know. Thank you for always being the rock of our family and Happy Mother’s Day!"

Lucky for 49ers fans, Garoppolo doesn't need to be in a relationship, or be public about his dating life, to compete at Super Bowl LIV, which will pit the San Francisco 49ers against the Kansas City Chiefs at Hard Rock Stadium in Miami Gardens, Florida. Fans can tune in to the 54th Super Bowl for kick-off at 6:30pm EST, and, who knows, maybe there will be a special someone waiting for Garoppolo on the sidelines.