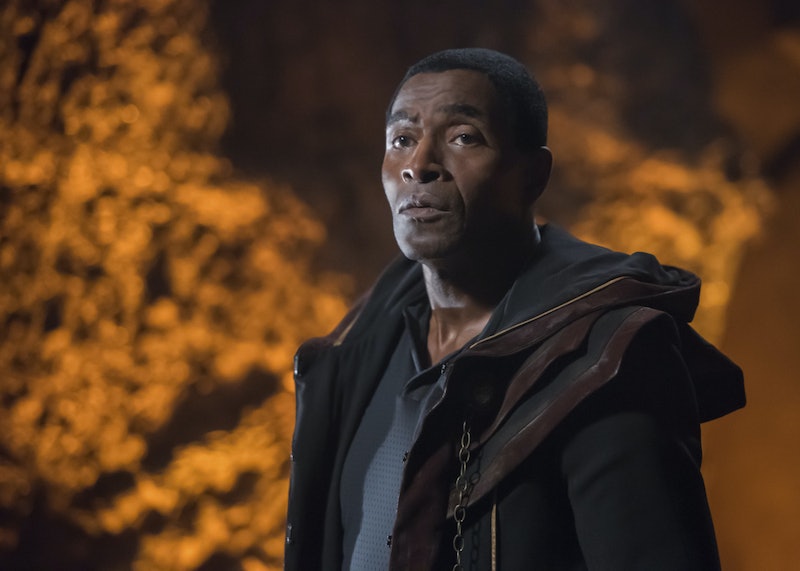 Season 3, Episode 3 of Supergirl was all about the J’onzz family. The friendly green Martian J’onn found out that he wasn’t the last of his kind. His father is alive too. So who is J’onn J'onzz's father on Supergirl? Well, the good news for fans is that we learned a lot about him on the Oct. 23 episode.

His name is M’yrnn J’onzz, and he’s played by Carl Lumby. Fans of the DC comics’ universe will actually already be very familiar with Lumby because he’s been a part of the cinematic universe well before appearing on Supergirl. Despite playing the Martian Manhunter’s father on this series, Lumby has been the voice of J’onn in a number of animated series including: Justice League, Justice League Unlimited, and Static Shock.

In Episode 3, Green Martian J’onn learns that his father M’yrnn has been captured and held hostage for centuries, while the White Martians eradicated their species. M’yrnn like his son, has a number of powers. He has telekinetic and mind reading abilities, as well as the ability to shape-shift to change his form. Unlike his son though, M’yrnn is averse to violence. When M’yrnn’s character was announced at a San Diego Comic-Con panel, he was identified as a “pacifist religious leader.”

But whether to proceed with violence or not is just one of the areas that J’onn and his father M’yrnn butt heads on. It’s clear to those who watch the series that the two share different approaches to problems, one with a more modern secular view, and one with a more traditional and religious one. Also, as executive producer for Supergirl Andrew Kreisberg noted in an interview with Entertainment Weekly, J’onn feels split between being human and being Martian. His father will bring that conflict out in new ways. "He spent 300 years on Earth and he’s always felt different, and other, and felt people were afraid of him, and has always had to hide who he really was,” Kreisberg said. But now that J’onn has this renewed connection to his roots via his father, that could shake things up for him. “For J’onn, it’s this realization that he’s not quite the alien that he thought he was,” Kreisberg said. “And what that means to him, and if we’re reconnecting with his Martian heritage, how important is that to him?

Of course, there’s no way this will be the last we’ve seen of M’yrnn. After all, there’s a new and incredibly dangerous weapon now on Earth. H’ronmeer’s Staff is a weapon of mass destruction that can easily disintegrate those it’s used against. Not only that, but as we learned from this new episode, it also has psychic properties and can be used to track down anyone. So M’yrnn will be incredibly important to future episodes because he knows the lore about the staff better than anyone.

With a weapon that powerful still in existence, surely someone nefarious will come after it. There’s one person… err, Martian that comes to mind – Da’rack. According to TV Line, he’s reported to be a new and aggressive White Martian that’s set to come to Earth at some point this season for an unknown purpose. After this episode however, it seems that purpose may be to steal back H’ronmeer’s staff to be able to track down all of the White Martian resistance fighters.

While TV Line had mentioned Da’rack would come “early” this season for that mission, it’s doubtful that back-to-back episodes would focus on the Martian Manhunter when the show is all about Supergirl. So, fans may have to wait awhile to see this Martian drama all pan out.