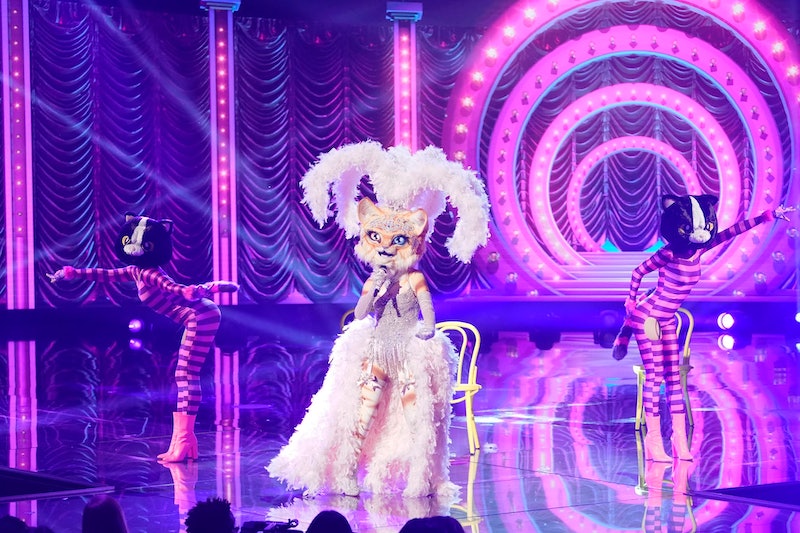 The Masked Singer finally introduced the second half of the Season 3 contestants on Feb. 19, and there is one purr-fect singer that has viewers excited. The Kitty on The Masked Singer has Harry Potter lovers talking. And a lot of fans are already guessing that Emma Watson is actually behind the Kitty mask.

Signs pointed to Watson from the beginning. The Kitty's clue package featured old Hollywood scenes, specifically George Méliès-style clips, which showed a wizard and pirates fighting. Kitty was also seen standing on a theater stage, while the clips played, and the entire clip ended with a rose shattering.

As Twitter user @fieldhouseia suggested, the wizard could be a reference to Harry Potter, the rose could refer to Watson's role as Belle in the live-action Beauty and the Beast (in which she sang), and the pirates fight scene might hint at fans' dream of Watson starring in the next Pirates of the Caribbean film. As for the cat costume, @alexneuhedel tweeted the attire could be in honor of Hermione's cat Crookshanks from Harry Potter. Lest we forget, Hermione actually turned into a cat in Harry Potter and the Chamber of Secrets.

Kitty also teased in her clue package that "people don't think of me as the person I've become, but the person I once was." And Watson is usually seen as Hermione Granger, not the talented actor and adult woman she is today.

These all seem like pretty solid clues, but there is another person Masked Singer fans think could also be the Kitty — Sarah Hyland from Modern Family. Not only is Hyland a singer, but she's engaged to Wells Adams from the Bachelor franchise, which would definitely explain the rose reference in the clue package.

Similar to Watson, Hyland has transformed into a different person than she was when she first became famous as Haley Dunphy on Modern Family. The Kitty also said that she's ready to "wipe the slate clean as the purest snow." If Hyland is wearing the mask, she could be hinting that she's ready to move forward, especially after the many struggles she's faced regarding her mental health, body image, and health issues.

All that said, there is one possible clue that has fans stumped: Kitty's two different colored eyes, also known as Heterochromia iridum. Neither Hyland or Watson have one blue and one green or brown eye, but some Twitter users have pointed out how both Kate Bosworth and Mila Kunis' eyes aren't the same color. The eyes could be a clue, represent something else entirely, or maybe they don't mean anything at all. Whatever the case, fans are holding out hope for Watson as the Kitty.

More like this
The New Bachelor Will Be Announced Next Week & Here Are The Top Contenders
By Grace Wehniainen
The 'Bachelor In Paradise' Schedule Shifts To 4 Hours Every Week After The Season 8 Premiere
By Brad Witter
Are Brandon & Serene Still Together After 'Bachelor In Paradise'?
By Kadin Burnett
‘RHOSLC’ Star Jen Shah’s Arrest & Legal Drama, Explained
By Brad Witter and Jake Viswanath
Get Even More From Bustle — Sign Up For The Newsletter