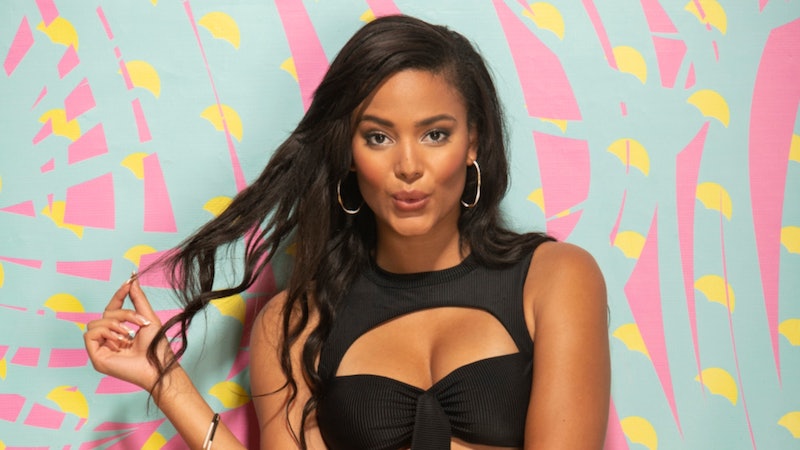 One thing that makes Love Island so successful is how much it engages its fans watching from home. Luckily for those tuning into the new American version of the show, contestants like Love Island's Kyra Green will make it easy to stay invested. At the age of 22, she's already a successful musician and model — and it sounds like she's just getting started.

According to Kyra's official CBS bio, she's from New York City but recently relocated to Los Angeles to pursue her music career. She grew up singing, dancing, and playing music on the subway with her two siblings, Tori and Riley, and now has a band with them called 212 Green. In 2013, the soul pop group appeared on America's Got Talent, where they performed Adele's "Rumor Has It." According to their official website, "Riley creates the instrumental portion (instruments and beats), raps, and produces the tracks, Kyra develops the melodies, and Tori writes the lyrics and harmonies," but they "all have a hand" in the entire creative process. Since moving to L.A., the band has found representation at CAA, and each of the siblings have partnerships with Social New York and KO Watches, so they're definitely making things happen for themselves.

Kyra is also signed by L.A. Models, the sister agency of New York Model Management. She's already something of a mini-celebrity herself with 144k followers on Instagram, and she's done successful modeling campaigns with brands like Victoria's Secret. As a seasoned performer with experience in the public eye, Kyra will likely adjust to her role as a reality star with ease — at the very least, she certainly knows how to work it for the camera.

When it comes to what Kyra is looking for in a partner, her bio reveals that she falls for the "artsy" types and wants a sensitive soul who shares her values. She's passionate about volunteering and hopes to find a someone who will join her in pursuing charity work. Personality-wise, she's looking for someone confident and funny — but never cocky, which she calls her biggest turnoff. Kyra describes herself as "a little dark, like Wednesday Adams," so she's looking for someone a little more goofy and lighthearted to balance that out.

Kyra's clearly a talented and passionate individual with a bright future, and she'll need to find someone who's willing to support her as she chases her dreams. While dating shows can often devolve into a contest to see who's the loudest and most attention-grabbing, it's clear that the guys will really need to dig deep and reveal their serious side if they want to get close to Kyra. And given that Kyra lives and works so closely with her siblings, she'll likely want a significant other who's close to their family too — or at the very least, one who gets a strong stamp of approval from the rest of the Greens.

More like this
'Love Island' Has Added Yet Another Bombshell To The Villa
By Bustle UK
This Pre-'Love Island' Video Of Olivia & Zara Together Changes Everything
By Bustle UK
Molly-Mae & Tommy Fury Revealed Their Baby Girl's "Really Unusual" Name
By Sophie McEvoy and Sam Ramsden
Every Season Of 'Love Island' Ranked Best To Worst
By Alice Broster, Frances Stewart and Sophie McEvoy
Get Even More From Bustle — Sign Up For The Newsletter
From hair trends to relationship advice, our daily newsletter has everything you need to sound like a person who’s on TikTok, even if you aren’t.