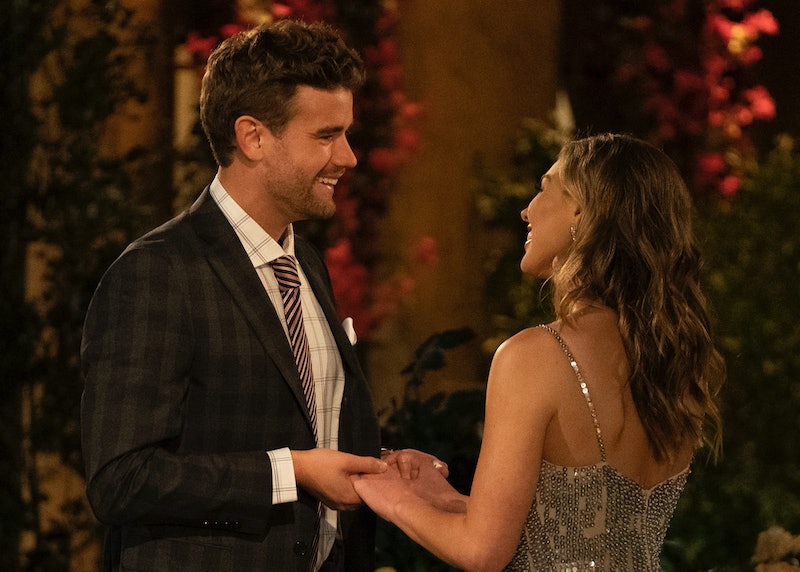 The Bachelor franchise generally tends to steer clear of any contentious topics, but Hannah B.'s season is going to get a little political thanks to one Bachelorette contestant: Luke S., a political consultant from Washington D.C. He met Hannah live during the finale of Colton Underwood's Bachelor season, so fans are already well-aware that he looks like Nick Viall, and that he isn't afraid to get a little risqué. (Upon meeting the Alabama-born Bachelorette on live national television, he said, "I don't go down south often, but for you, I'd go down any time.") But there's more to know about him than that rather polarizing first impression.

Just like the Bachelorette was one of two Hannahs during Colton's season of The Bachelor, Luke Stone is one of two Lukes. Out of the two Lukes, Luke P. seems poised to become a villain since he is called an "evil, pathological liar" and a "psychopath" in the trailer for Hannah's Bachelorette season. But Luke S. is no angel. In the trailer, the Nick look-alike says, "I'm here for Hannah and don't you ever f*cking forget it." He's also spotted telling an unseen contestant, "I can take Hannah from you any time that I want." So it seems his time as a political fundraiser on Capitol Hill has taught him how to be a bit aggressive.

According to his LinkedIn profile, Luke has been a fundraising consultant for Fraioli & Associates since November 2018. The company's website notes that it's a "political campaign consulting firm dedicated to electing Democrats." Luke was previously a regulatory and legislative analyst for two years, and before that, he was a staff assistant to California's Congressman Brad Sherman in the House of Representatives. The 29-year-old earned his degrees in political science and art history from George Washington University back in 2013, where he also was in the Sigma Chi fraternity and on the varsity rowing team.

But politics aren't his only passion. He calls himself a "tequila expert and entrepreneur" in his Bachelorette bio and his Instagram shows how he has made his own vodka and tequila. He also knows his way around a bar, since the Washingtonian reported that Luke worked at the D.C. bar Stoney's for four months before he left to go film The Bachelorette. DCist even spoke to one of Luke's bosses at Stoney's, bar manager Reese Edmonds, who said how excited Luke seemed that Hannah would be the Bachelorette. "He said he thought he knew who the girl was: 'I do want it to be this chick from the South, her name is Hannah. She's really cute and goofy.' He really wanted it to be her," Edmonds said. So when he says he's there for Hannah, he apparently really means it.

Edmonds also noted that his "go down" comment when he first met Hannah isn't really indicative of who Luke is. "He's not that type of guy," she told DCist. So maybe there's a chance for Luke to redeem himself ... especially if the other Luke is the "villain" of the season. And if you go to his Instagram page, you'll see he's not all politics and booze, as he shares a decent amount photos of him traveling to places like Bali in Indonesia and hanging out with friends.

You'll have to see if Luke S. can make you forget all about his first first impression when Hannah's Bachelorette season begins in earnest.

More like this
Bachelorette Gabby Kissed Her New Fiancé On 'Dancing With The Stars'
By Jake Viswanath
Here's Exactly When Rachel & Tino's Fight Happened After 'The Bachelorette'
By Grace Wehniainen
Clayton & Susie Broke Up, Citing "A Significant Amount Of Pain" After 'The Bachelor'
By Jordyn Tilchen
Erich Addressed His Text Message Scandal & Twitter Is Divided
By Kadin Burnett
Get Even More From Bustle — Sign Up For The Newsletter