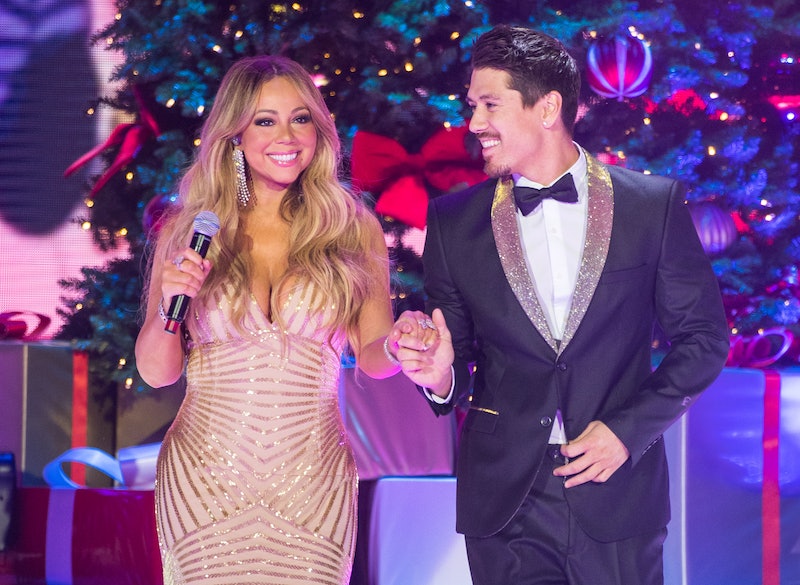 With this year's Billboard Music Awards quickly approaching on May 1, fans may be wondering who Mariah Carey is dating in 2019 and if she will be hitting the red carpet with that special someone in tow. Carey, who in addition to performing, will also be honored with the night's Icon Award, will likely have one or more important guests in the audience as she receives the prestigious award. However, it is immediately unclear who will be on hand for the big night.

As many may know, Carey is currently dating Bryan Tanaka, a dancer and a choreographer who has been working for the singer since he was a backup dancer on her 2006 The Adventures of Mimi Tour. And although it is unknown whether or not Tanaka will accompany Carey to the upcoming awards ceremony, his appearance wouldn't be surprising since the two have had an extremely tight-knit bond over the past couple of years.

Although their romance may have started off a little rocky, things appear to be going pretty strong between the two. Carey and Tanaka were recently spotted hanging out in New York City for the dancer's 36th birthday. According to their respective Instagram posts, the pair hit-up the Broadway production of Hamilton and later partied at TAO restaurant in downtown NYC. Tanaka shared photos and video of himself and the Glitter star celebrating throughout the night and it seems that they couldn't be happier.

In one video that featured Tanaka dancing to Ginuwine's "Pony", Carey can be heard saying, "So Tanaka's very happy tonight on his anniversary. I have nothing to say except he's happy and that was my goal." Tanaka's caption gave more insight into his dance moves, sharing, "When she says put on a show for your birthday... #forlaughs#youalwaysmakemehappy"

The actual timeline of Carey and Tanaka's romantic involvement is a bit blurred. However, People reported that the two were first spotted in the middle of some PDA on a beach in Hawaii during Thanksgiving weekend in 2016.

"Something connected with us back in the day and there was just a mutual admiration. She saw something in me that I actually didn't recognize at first, from that it was over," Tanaka told E! News in December 2016. "It was set in history that we were gonna be connected some way, some how."

The two briefly split in April of 2017, but got back together just weeks later, according to E! News. Prior to her involvement with Tanaka, Carey was engaged to Australian billionaire James Packer. People notes that Tanaka, who now serves as Carey's creative director, was a reported source of tension between her and Packer. According to TMZ, Packer banned Tanaka from Caesar's Palace back in 2016, when he reportedly showed up injured and unable to perform.

Before her involvement with Packer, Carey was married to actor Nick Cannon from 2008 until their separation in 2014. The two, who have remained close friends and co-parents over the years, share 8-year-old twins Moroccan and Monroe.

So, although Tanaka is likely to make an appearance with Carey at this year's Billboard Music Awards ceremony, there's also a huge chance that Cannon and the kids will also show up to watch Carey take home her Icon honor. And fans will just have to wait and see how it all pans out.

More like this
Mariah Carey Is Releasing Her “Lost” '90s Grunge Album
By El Hunt
Kanye West Apologizes To Kim K "For Any Stress I Have Caused" In Rare Interview
By Jake Viswanath
Everything To Know About Taylor Swift’s 10th Studio Album, 'Midnights'
By Grace Wehniainen and Jake Viswanath
Twitter Is Freaking Out Over Rihanna’s 2023 Super Bowl Halftime Show Announcement
By Stephanie Topacio Long
Get Even More From Bustle — Sign Up For The Newsletter