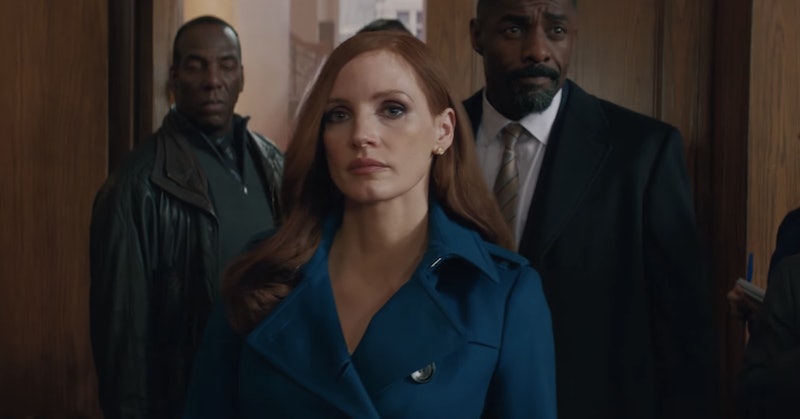 "I'm Molly Bloom," Jessica Chastain says at the beginning of the new trailer for Molly's Game, Aaron Sorkin's directorial debut. "Do you know about me?" Whether you do or not, don't worry; you're in for a treat once you start watching this trailer for the film, out No. 22, which is based on a true story that honestly is stranger than fiction. So, who is Molly Bloom?

Well, Bloom is an Olympic-class skier and waitress turned "Poker Princess" who ran the most exclusive high-stakes poker game in the world at the age of 26. For a decade, Molly's game — hence the title — attracted celebrities like Leonardo DiCaprio, Ben Affleck, and Tobey Maguire. According to Vanity Fair, her games also attracted Wall Street business men and the Russian mob and in 2013, Bloom was arrested for her role in the $100 million gambling ring. Actually, as Chastain claims in the trailer, Bloom was raided by FBI agents who took all her money "assuming it was made illegally, but it wasn't." See? It really is a crazy story.

Naturally, Bloom released a tell-all memoir in 2014 about her time running poker games and Sorkin's movie, which was adapted from her book of the same name, goes into how high the stakes really were. Seriously, poker has never seemed as fascinating as it does when Chastain is talking about it.

Alongside her criminal defense lawyer Charlie Jaffey, played by Idris Elba, Bloom must figure out away to protect herself and not lose everything. That's not easy when you're business may not be on the right side of the law. "You don't want to break the law while you're breaking the law," one of her associates tells Chastain's character in the trailer. It's funny, but it isn't. Since the legality of her work is what's really at question, the details matter.

Chastain's Bloom argues that she isn't breaking the law. "The law that I'm accused of breaking is defined as betting on game of chance," she says. "Poker isn't a game of chance. Poker's a game of skill." And if Chastain doesn't win an Oscar for that skillful delivery alone, I'll be shocked.

No spoilers or anything, since, you know, this movie is based on true events (though, stop reading now if you want to be surprised), but the real Molly Bloom avoided jail time in 2014 and got just a year of probation for admitting she was a key player in the illegal gambling ring, according to the New York Daily News. While testifying, Bloom told the judge she had "made mistakes" and her arrest had “been a great opportunity for growth, and I’ve learned many valuable lessons," according to the New York Post.

At the time of the trial, which was weeks before the release of her tell-all memoir, her lawyer, James Walden, said that the book was just a “cautionary tale” about a “small-town girl” from Colorado. Of course, it also included some salacious stories including one in which Tobey Maguire asked Bloom to bark like a seal, according to Vanity Fair.

And while Bloom is bound to learn a few lessons in Molly's Game, it's clear from the trailer that Chastain's portrayal of the real-life woman is going to be complicated.

In an September interview with Deadline, Sorkin said his movie is going to tell a story that Bloom didn't include in her book — a more personal one that gets at the heart of how a small town girl from Colorado ends up running a high stakes gambling ring. “She was not the woman the tabloids made her out to be,” Sorkin told Deadline. “There was much, much more to her than that.”

So, whether you know Molly Bloom or not, with Molly's Game you're bound to learn something new about the woman who was once the Princess of Poker.