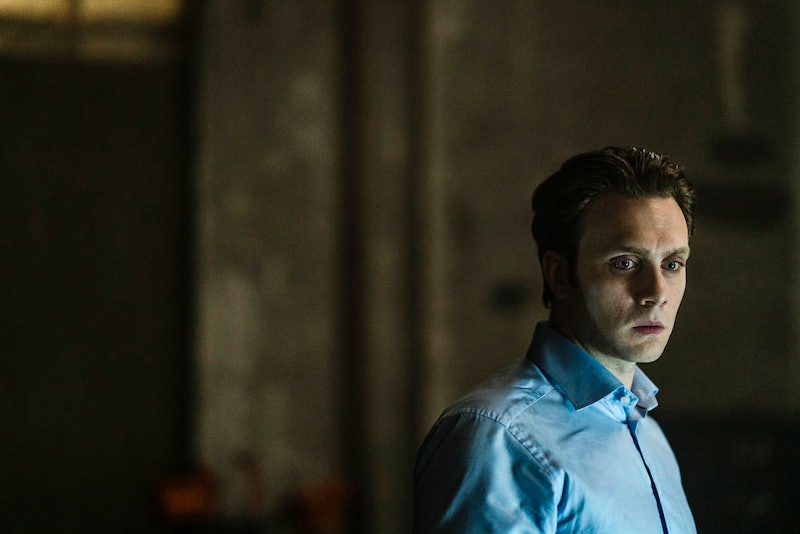 Mr. Robot often leaves viewers with unanswered questions, but Season 3 is changing that. New characters are revealing details about past events. And along with Bobby Cannavale's Irving, the introduction of Mr. Williams on Mr. Robot, played by prolific actor Wallace Shawn, helps explain where Tyrell was during Season 2. Spoilers. Shawn only shows up in one scene in "Eps3.2legacy.so," but his character is able to break Tyrell Wellick. So while it's unclear if this menacing agent for the Dark Army will return again, Shawn's character helps give major insight into the emotional state of Tyrell during this illuminating, flashback-filled Season 3 episode.

After Joanna Wellick was shot and killed in Episode 2 of Season 3, you might expect a Tyrell-centric episode to deal with her death. But instead, Mr. Robot takes viewers back in time, all the way to the end of Season 1 to the night of the Five/Nine hack. Elliot and Tyrell execute the hack and afterward, Elliot — well, the cutthroat Mr. Robot — tries to shoot Tyrell with Darlene's gun that was stashed in the popcorn machine. However, the gun doesn't work, which explains how Tyrell was still alive in Season 2. Afterward, Mr. Robot reveals phase two of the plan to Tyrell, but they're interrupted by Irving. Turns out, Irving was involved all the way back then. He comes on behalf of the Dark Army to clean up the fact that Gideon was suspicious and reported the prospective hack to the FBI. Tyrell is sent to a Dark Army safe house and that's where Mr. Williams comes in.

In order to ensure that he will be loyal to the Dark Army, Shawn's cocaine-fueled character interrogates Tyrell. By asking Tyrell if he murdered Sharon Knowles, if he loves his wife, if he has slept with anyone else since he has been married, if he has cheated on his wife, if he was fired from E Corp, if he hates his father, and if he is afraid of becoming his father — all queries the audience knows the answer to by now — Williams gets the sincere answer to the question, "Will you be loyal to me?" Tyrell says "no," but the Dark Army still works with him because through this cross-examination, Tyrell proves his unwavering loyalty to Elliot. Unbeknownst to Tyrell, he is really loyal to Mr. Robot, not Elliot, but the personality Tyrell is devoted to doesn't matter to the Dark Army.

Shawn's character then reveals that the phase two plan will be called Red Wheelbarrow, allegedly at the request of Elliot. Red Wheelbarrow was the name of Elliot's Season 2 journal and is the name of the BBQ place that Irving frequents. But this name actually comes from Tyrell. In the Season 2 finale, Tyrell said the William Carlos Williams poem, "The Red Wheelbarrow," held significance for his father. "I use it as a reminder. A reminder of him and a reminder of what I never wanted to become," Tyrell said of the poem in his earnest confession to Elliot.

Considering Elliot's alter-ego is his dad, it's not surprising that he latched onto their shared, deep-seated issues with their fathers. With that in mind, it's very possible that Shawn's character is not actually Mr. Williams, but is taking the surname of the author of "The Red Wheelbarrow" to trigger Tyrell. Another way he could be manipulating Tyrell? "Mr. Williams" is groomed like the character that fsociety uses as a symbol.

As disclosed in Season 2, the fsociety mask is from the (fake) movie The Careful Massacre Of The Bourgeoisie that Elliot and Darlene used to watch as children. Tyrell himself donned this mask himself for fsociety before. Knowing how meticulous Whiterose is with her plans, it can be no coincidence that a Mr. Williams with a curled, white mustache and a bowtie shows up to get information from Tyrell. Could Elliot be working with Dark Army more directly than he realizes? While the Dark Army is certainly powerful in their own right, Elliot could have divulged the information Tyrell shared about Sharon Knowles and his father to the Chinese hacking organization. And in turn, they used this personal intel to interrogate Tyrell.

Yet, another scenario could be that Tyrell is having his own hallucinations in "Eps3.2legacy.so." Tyrell believes he is connected to Elliot in some special way and perhaps that way is through their mental illness. So maybe Mr. Williams isn't really there and this is some trick his mind played on him to prove how faithful he is to Elliot. Although Tyrell misses his child and is jealous at the thought of Joanna dating anyone else, he is more consumed by Elliot and their project than anything else in the episode.

So while it certainly seems like Mr. Robot is finally giving fans the answers they so desperately crave in Season 3, don't become complacent when it comes to accepting the information presented. Because even though Tyrell is no Elliot, perhaps viewers shouldn't trust his version of events either.