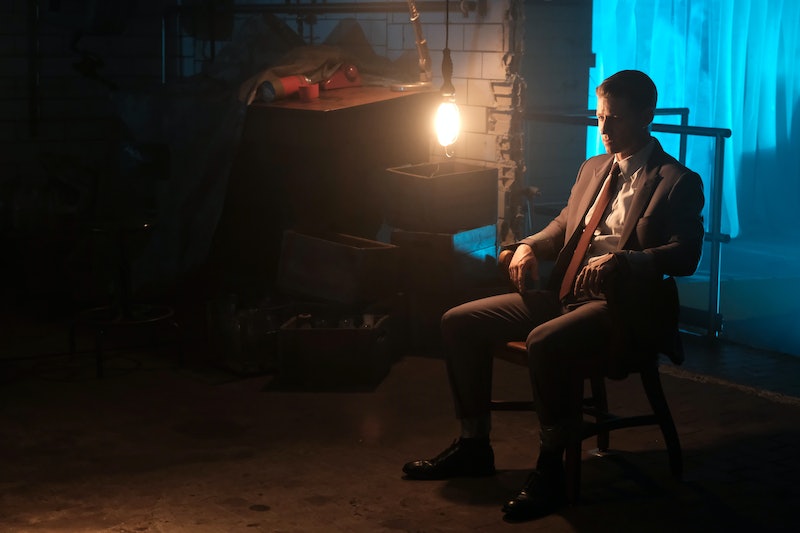 Gotham is crowded with some of the most iconic and memorable characters from DC Comics history, from its adolescent take on Batman to his well-known foes like the Penguin, Catwoman, Poison Ivy, and the Riddler. But who is Professor Pyg? Gotham is introducing another villain who may be a little less familiar to those who only know Batman mythology from the movies. But even though this DC character hasn't become super famous yet, he's certainly one of the comics' modern masterpieces, and one of its most horrifying creations. He'll make his Gotham debut in the Oct. 26 episode.

On the show, according to TV Line, Professor Pyg will have a multi-episode arc and be a serial killer who is hunting down police officers. Naturally, that will be a huge problem for the GCPD under Harvey and Jim, since they've struggled to force even the cops to adhere to the law this season. As the city has become more and more overrun with criminals. According to actor Michael Cerveris, Professor Pyg will have a musical number as well. "Especially when they had somebody who played Sweeney Todd," Cerveris said to USA Today, producers "couldn't resist" the idea of having Professor Pyg sing a little bit during a confrontation with the Penguin. Fans will see Professor Pyg's moves stand up to some of Cerveris' most acclaimed Broadway performances in shows like Todd, Assassins, Evita, and Fun Home.

The concept of the character is simple and frighteningly logical: he's a villain obsessed with the heads of pigs; his name is Professor Pyg; and cops are sometimes nicknamed "pigs." It's all very sensible, by Gotham standards, even for a plotline where victims have the heads of pigs placed on their bodies by a local madman. However, this is a new version of the character created specifically for Gotham. And believe it or not, a pig-obsessed serial cop killer with a beautiful singing voice is actually a simplified version of what this creepy character is like in the comics.

In his first DC appearance in 2007's Batman Issue 666 "Batman in Bethlehem," Professor Pyg, AKA Lazlo Valentin, is introduced as an egomaniac who wants to make the world over into his image so people can be what he sees as physically perfect "Dollotrons" — mindless, lobotomized servants with masks surgically affixed to their faces. While this version of the character certainly loves pigs and wears a pig mask, he also loves transformation, hence his name's unique spelling, a reference to the George Bernard Shaw classic Pygmalion. On Gotham, it's Gordon he wants to remake into his protege. "He is almost looking at Gordon as an ally, like ‘I’m on your side, Jim.’ And Jim is saying, ‘No, you’re actually a sociopath.’ So it works in many ways as a seduction on Pyg’s part,” executive producer John Stephen told USA Today in the article mentioned above. And who knows, with so much chaos around the city, the idea of complete and total control over Gotham might actually appeal to Gordon.

In later DC appearances, Professor Pyg has become one of the ringleaders of the Circus of Strange, and attempts to control the city's population by using his Dollotrons to distribute mind-numbing drugs. It's possible that this new version of the character, while less-surgically minded, will also seek to control the population — maybe that's why he feels like he needs to capture and destroy the "pigs" working at the GCPD.

But whatever Professor Pyg's twisted plan turns out to be, it sounds like Gotham is moving beyond the recognizable, famous Batman's Rogues Gallery in order to explore some weirder and wilder villains.