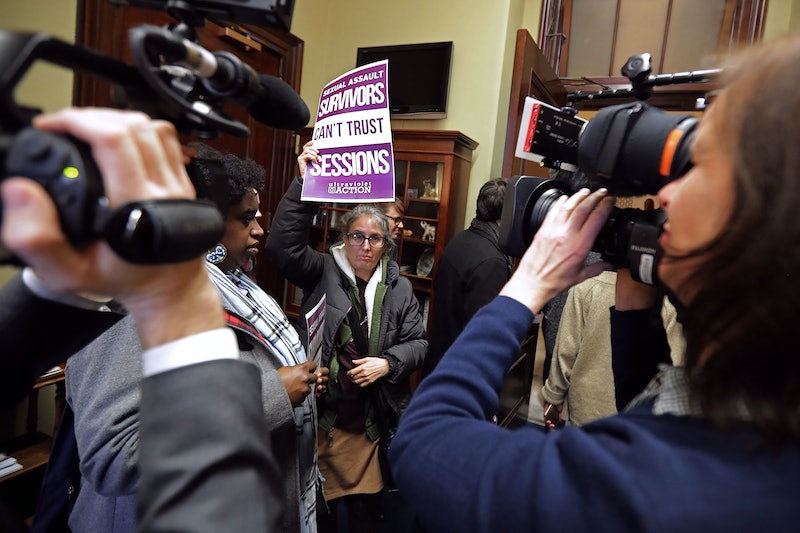 The Trump administration is set to unofficially kick off on Tuesday with the confirmation hearing of Jeff Sessions for attorney general. Sessions, whose career has been marked by numerous charges of inappropriate behavior against African Americans, Muslims, and immigrants — charges Sessions denies — was previously rejected for the position of federal judge in 1986 over his actions regarding racial minorities. Unsurprisingly, a myriad of activists showed up to protest Sessions on Tuesday.

According to Sen. Dianne Feinstein, 400 civil rights groups wrote letters voicing opposition to Sessions' appointment. Among the protestors on Tuesday were the Revolution Communist Party and the women-run peace movement Codepink, while other social justice groups like the Council on American-Islamic Relations and the NAACP showed up to live-tweet the hearing for their supporters.

Resistance to Sessions' appointment began as soon as his nomination was announced, and civil rights activists have organized demonstrations against him for weeks. On the Monday preceding his hearing, hundreds of faith leaders marched in Washington to condemn Sessions' policies on racism, women's rights, and religious freedom.

Several demonstrators on Tuesday found themselves swiftly ejected — some for more theatrical antics, like dressing up as KKK members and shouting at Sessions, while at least one Codepink member was thrown out for laughing out loud upon hearing praise for the possible future attorney general.

Here are some notable moments.

1. Sen. Feinstein Shows Up With Numbers

A list of hundreds of prominent activist groups opposing one man has got to be a convincing argument for the Senate Judiciary Committee.

2. A Codepink Demonstrator Ejected For Laughing

Codepink member Desiree Fairooz was the protester ejected for probably the least amount of theatrics.

3. Anti-Racist Activists Dressed As KKK Were Thrown Out

While the intentions behind these demonstrators' actions are admirable, their faux KKK robes might not have been the best choice when it comes to optics, since it only looks like the KKK is against Jeff Sessions. They did bring sarcastic "Go Jeffie Boy!" signs to make their point clear, but as they're getting thrown out, the point of their robes might be lost on others not present.

Yes, a lot of people got thrown out.

Khizr Khan, the Gold Star father who gave a speech critical of Trump at the Democratic National Convention, and who wrote a letter to the Senate Judiciary Committee pleading that they oppose Sessions, was spotted in the audience on Tuesday morning watching the proceedings.

In a bizarre moment, Republican Sen. Lindsey Graham chose to start talking about football during the hearing. Not the best time to do so when civil rights activists are demonstrating against Sessions and the GOP establishment for not taking equal rights seriously.

Wondering what Sessions' face looked like during all these interruptions.