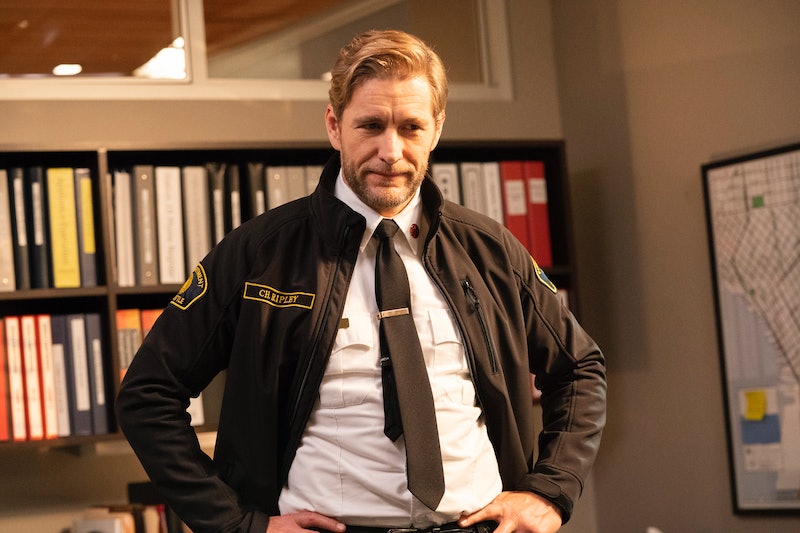 On this week's episode of Grey's Anatomy, fans have a Station 19 crossover on their hands. You don't necessarily have to watch both shows to understand the new installment, but if you're a Grey's fan and want to know more about who the Grey Sloan staff will be bumping into this week, I've got you covered. So who is Ripley on Station 19?

Lucas Ripley is the chief of Station 19, and the events of the crossover episode put him right at the center of the action. According to TV Guide, the episode will have a firefighter from the station land in Grey Sloan Memorial Hospital with Maggie tending to their wounds. And though the initial crossover announcement neglected to say who the character in peril would be, as Station 19 fans saw in the last episode, it's Ripley.

He had a heart attack after making it out of a massive coffee house fire — as TV Guide's Megan Vick pointed out, it's a very "Jack from This Is Us" post-house fire situation — lord help us. To make matters worse, Ripley and his secret girlfriend Vic, another firefighter at the station, had just been toying with the idea of an engagement when the heart attack hit. Luckily, though, good old Glasses (Jake Borelli) from Grey's happened to be on the scene as Ripley collapsed, and brought him in.

Plus, trailers for the crossover show that Bailey recognizes him as a co-worker of Ben's immediately. Under her eye, he'll likely get the best care possible.

Meanwhile, no one can reach Vic to tell her what happened to Ripley, and Maggie seems ready to throw fists if he tries to leave — she's Ripley's doctor, after all, and he's in danger if he exits the hospital. Who knows what Vic will think when she doesn't know why Ripley has disappeared — this seems like a classic case of missed communications that could be disastrous. We'll just have to wait and see.

Those are the basics of what Grey's fans need to know about Ripley's character before Station 19''s world comes barreling in again, but what about the actor himself?

Brett Tucker is the man behind Ripley, and there's a good chance you've seen him before if you're a fan of TV dramas. He starred as Harry Davis in all four seasons of Mistresses, the now-finished ABC drama starring Lost alum Yunjin Kim, had a long stint on the Australian soap opera Neighbours, and has even guest-starred on other huge hits like The Americans and This Is Us. Maybe he took inspiration from Jack's heart attack storyline after all!

Something tells me Maggie isn't about to let Ripley leave the hospital, even though he's itching to reach Vic. And Vic is probably not too happy that her boyfriend/maybe-fiance disappeared off the face of the planet and she doesn't know where he is. Hopefully someone manages to reach her before too long, and they sort out what the future of their relationship holds. And more importantly, fans will be eager to see how Ripley's heart attack affects him, and if he'll have any kind of future at all.

More like this
'Elite' Season 6 Is Arriving Sooner Than You Think
By Gretchen Smail and Grace Wehniainen
Nicola Coughlan Shared A Lady Whistledown Excerpt From ‘Bridgerton’ Season 3
By Grace Wehniainen, Alyssa Lapid and Sam Ramsden
Devi Is Going To Meet A “Smoldering Bad Boy” In ‘Never Have I Ever’ Season 4
By Jack Irvin and Gabrielle Bondi
The ‘Emily In Paris’ Season 3 Release Date Is Here, Plus The First Footage
By Bustle Staff
Get Even More From Bustle — Sign Up For The Newsletter