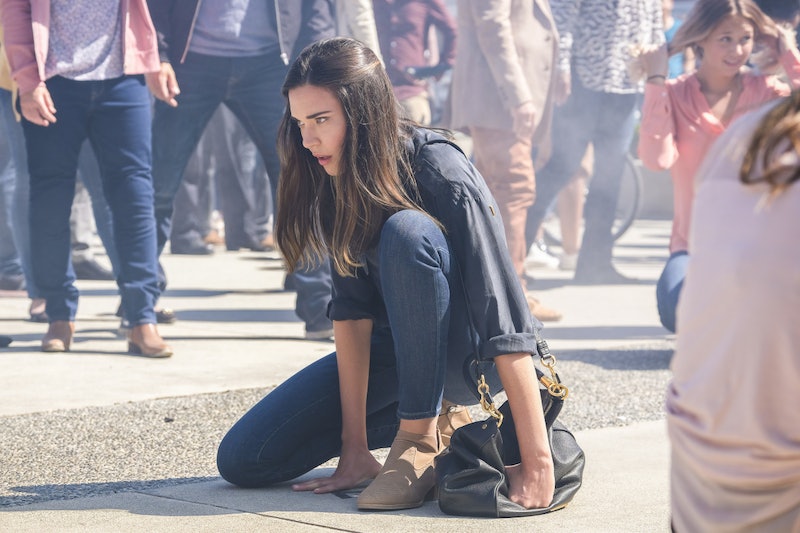 We may root for superheroes but let’s face it — without interesting villains, superheroes are much less fun. Luckily, when Supergirl returns for its third season fans will get a chance to see one of her most fearsome villains yet. But who is Reign from Supergirl? There’s a lot to be learned about the character by looking into what we know so far, versus her comic book origins.

Despite Supergirl Season 3 being set to premiere Oct. 9, and despite seeing Odette Annable (who will star as Reign) in promos for early episodes, it will be a long while before viewers actually see Reign. That’s because she won’t start out as Reign. She starts out as… Samantha the single mom? Executive producer Alex Kreisberg explained to Entertainment Weekly:

We also already know, per Variety, that Reign’s costume will be different from that of the comics (and I’ll talk later about how her journey to Earth is a bit different as well), but the differences extend further than that.

“Usually on these shows, you either meet the big bad at the end of Episode 1 or you meet them at Episode 7 or 9, and you realize that they've been pulling the strings the whole time, and were out there working with their multi-year plan to take down the heroes or destroy the city. When we were figuring out Reign, one thing we've never really seen on any of these shows is we've never seen the big bad become the big bad.”

As far as comics go, Reign’s origin story is a bit different. A relatively new character, Reign had her first appearance in the New 52 back in 2012. But what is she? Reign is one of five “Worldkillers,” genetically modified species granted immense power basically intended to be living weapons of mass destruction. But frighteningly enough, these Worldkillers have a clear connection to Supergirl. Her father Zor-El, created them, and despite being ordered to destroy them by the Kryptonian Science Council, he didn’t — although he regretted creating them in the first place.

Reign along with Deimax, Perrilus, Flower of Heaven, and Worldkiller-1 make up the team of Worldkillers. Understood to be ruthless beings with a penchant for bloodlust, they survived Krypton’s destruction. Not realizing their origins but knowing their names and that they were Worldkillers, they determined Earth could lead to their origin’s discovery. Reign, like the other Worldkillers, has an array of superpowers including superhuman speed, durability, strength, and stamina — as well as the ability to fly like Supergirl. In the comics, she was even able to defeat Supergirl, which lead to the Worldkiller’s attack on Earth. Ultimately though, Supergirl was able to drive them off, with Reign vowing to come back — alluding to more unknown Worldkillers that would join them.

Back to thinking about thinking about Supergirl’s TV series version, fans have to assume that something traumatic happens to spark Reign to deadly action. Speaking at the San Diego Comic Con, as reported by Hidden Remote, Annable talked about the motivations of her character without giving too much away. It may seem to hint that Reign’s driving force could be as simple as her motivation in the comics: Discovering her origins.

“[Reign] doesn’t come to Earth to go on a killing spree. She had a very specific agenda that she is out to [achieve] and you’ll see that story unfold throughout the season. For me, it’s really amazing because it’s kind of a heartbreaking story and I think you’ll feel for her.”

Oddly enough, though, Annable originally didn’t want to be a villain. Years ago, before being cast as a villain capable of destroying worlds, she auditioned to be another character — none other than Kara’s (Supergirl) sister Alex Danvers. But, in an interview with Entertainment Weekly Annable said that she’s excited to be Reign and, as of yet, she’s not even sure herself how it will all turn out.

She did say that she's not at the point of filming the full transformation yet, and she's unsure when it'll come in the season. At this point she said she's only seeing "little bits that start to happen to reveal who she really is. It's creepy."

But there’s still so much as yet unknown. Will Supergirl be able to stop Reign on her own? Will Supergirl get help? Will the rest of the Worldkillers join Reign by the end of the season? Those questions won’t answer themselves; so it looks like it’s time to watch some Supergirl, premiering Oct. 9 on The CW.

More like this
UK Viewers Will Have To Wait To Watch The Handmaid’s Tale S5
By Maxine Harrison
This Episode 6 Moment Foreshadows Viserys' Fate On 'House Of The Dragon'
By Grace Wehniainen
Nicola Coughlan Shared A Lady Whistledown Excerpt From ‘Bridgerton’ Season 3
By Grace Wehniainen, Alyssa Lapid and Sam Ramsden
A New 'And Just Like That' Table Read Pic Confirms A Key Character's Return
By Jack Irvin and Grace Wehniainen
Get Even More From Bustle — Sign Up For The Newsletter