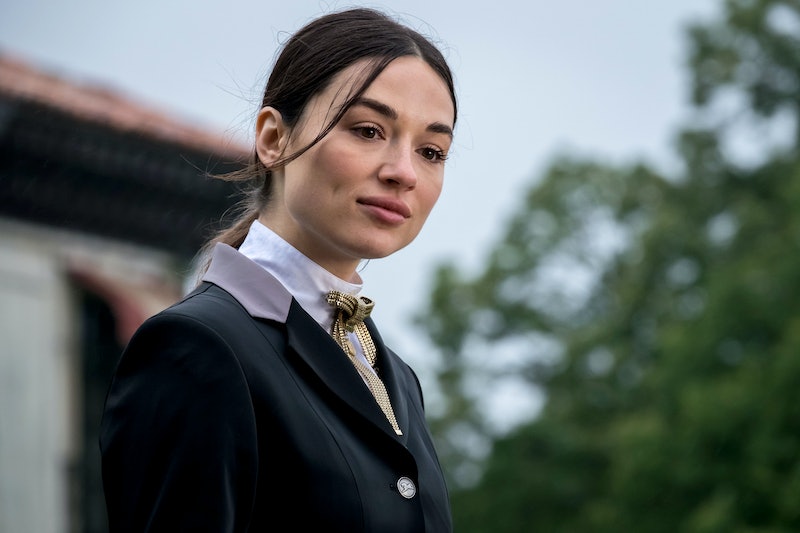 Things are getting serious in Gotham Season 4, and the Falcone family, led by mobster Carmine, might be the Jim Gordan's best, last hope to save the city from the chaos and corruption of the Penguin, who is taking over by making the city' criminals pays for licenses organized and enforced by Victor Zsasz, his ruthlessly efficient associate. In the Oct. 5 episode, Jim will meet new Gotham character Sofia Falcone. Because in his mind, the exact same family that helped make the city so dark and unfriendly in the first place may be just the people to save it.

Sofia, played by Crystal Reed, is Carmine Falcone's daughter, who could change both the city and, perhaps, help Jim heal from his many personal traumas. That's right — even before Sofia makes her appearance, there's already the suggestion that this could be Jim's next romantic relationship.

According to Entertainment Weekly, the addition of Sofia Falcone is going to tie into Jim Gordon's overall arc this season on Gotham. "We’re going to see Jim, in his quest to save the city, cross different ethical lines than he ever did before," executive producer John Stephens told the publication. "It’s going to bring him to an ethical nadir that we haven’t seen him at, and it’s going to be told through the context of a relationship that he has with Sofia Falcone, the daughter of Don Falcone, who’s played by Crystal Reed this year. And that’s going to be a really compelling and interesting relationship."

By the end of Season 2, Jim had lost his chance at a happy ending and a normal family, with the loss of Leslie Tompkins and his unborn child due to his obsessive need to save Gotham City. But over the course of Season 3, he failed to find a new partner who could handle the risks of being with Gotham City's most risk-taking officer. After one final near miss with Lee, she left Gotham City, while Jim remained. And speaking of Lee, there's some irony in Jim finding love with a member of the Falcone family, because all throughout Season 3, Jim undermined and second-guessed Lee's relationship with Mario, who was also Carmine's child. Because Mario was a doctor, he went by a different last name, but it sounds like Sofia still embraces being a Falcone — maybe Jim will have to realize that before Mario became infected with the Tetch virus, he should have given Lee's new relationship more of a chance.

But even if Jim learns his lesson about respecting someone else's relationship, he still might be in for a surprise — because in the comics, Sofia Falcone is DC villain Hangman. In the famous story "The Long Halloween," villain Two Face's origin story is woven into an ongoing, mysterious assault on the Falcone family. A serial killer begins targeting members of the criminal empire on holidays, eventually killing patriarch Carmine and, during an attack in a courtroom, winds up disfiguring District Attorney Harvey Dent, who then becomes Two Face. Sofia, also Carmine's daughter in the comics, is also seriously injured and, in the followup comics arc, "Dark Victory," she adopts her own alias Hangman, a killer who targets police officers and other members of law enforcement that once worked with Harvey Dent as her form of revenge for her father's death.

Dent hasn't appeared in Gotham since Season 2, and right now, Carmine Falcone is basically retired, not the active mobster who would be the natural rival of a Gotham supervillain. But Jim Gordon is often plagued by bad luck, so it wouldn't be surprising to see his new relationship with Sofia and her dad turn from promising to deadly over the course of the season — and honestly, Lee would have a pretty good case to resurface and upend Jim's life again.