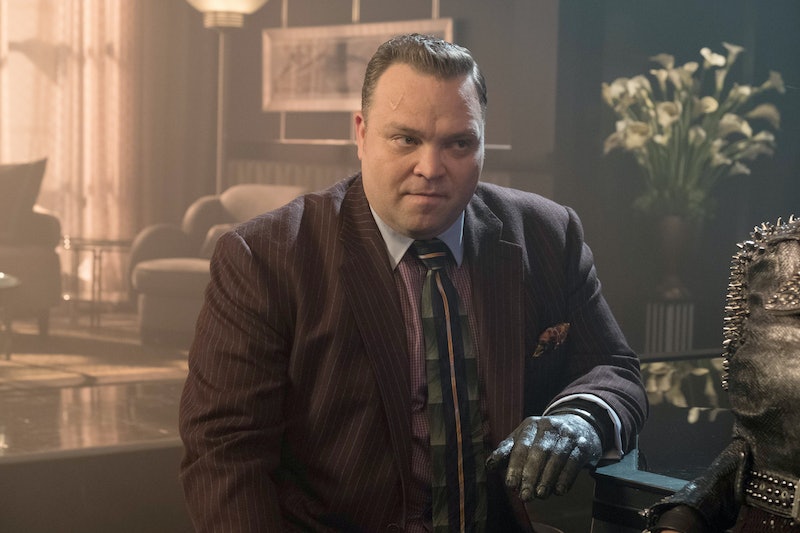 In the Gotham Season 3 finale, several characters seemed on the verge of meeting their maker. Selina was pushed out a window, Barbara was electrocuted, Ed was frozen, Butch was shot, and so on. And so far, all of those characters have made an appearance in Season 4, except one: Butch Gilzean, who was last seen on Gotham in the Season 3 finale with a brand new identity: Cyrus Gold. That name immediately jumped out for comic fans as the original identity of comics supervillain Solomon Grundy. And don't feel any shame if you're wondering who Solomon is, because Butch's (Drew Powell) new alias is a DC deep cut.

According to what Gotham executive producer John Stephens told CBR, Butch will become Solomon Grundy in Season 4, but he'll also still be Butch. "One of the themes for the show has always been the idea of the fluidity of identity, and the creation of identity," Stephens said. "We’re asking the question of, ‘Is this Butch’s new personality?’ Or, ‘How does he create a third personality that is part Grundy and part Butch?"

That question of identity has always been a part of the Solomon Grundy character, who, in his original DC appearance, begins life as a wealthy man named Cyrus Gold. Cyrus is killed and left in Gotham City's "Slaughter Swamp" in 1894 or 1895 (depending on the continuity you're reading), and, after rotting there for decades, rises and emerges as a horrifying, undead zombie creature with limited intelligence and a shambling physical presence with the new name of Solomon Grundy.

The name of Solomon Grundy actually originates from an old English nursery rhyme collected in The Nursery Rhymes of England in 1842. The poem begins with the couplet "Solomon Grundy, born on a Monday" and takes Grundy through a very eventful week until he dies on Saturday and is buried on Sunday. The full poem is probably meant to teach the days of the week, but there is obviously a sense of macabre about it that fits with the comic book character of the same name.

The original Solomon Grundy is a foe of the Green Lantern, first appearing in All American Comics #61, but in recent years he's been more associated with Superman and Batman, making him an appropriate choice for Gotham to adapt. He may be a slightly surprising one, though, given that characters on this show frequently return from the dead. A cursed swamp isn't really required.

It's also worth noting that while Solomon usually has a long incubation period of years spent in the swamp, Butch will be reemerging after just the short hiatus that's passed between seasons. But while Butch was never the smartest guy in the room, he'll have to be losing some brain power to become Grundy as comics fans know him. The not-particularly-clever body man, in this new iteration, "has the same mental capabilities as the most well-known version of Grundy," Stephens told CBR in the same interview. "The way certain things will change is there are moments when elements of Butch’s personality and memories will come back into the fore of Grundy."

If the real Butch's intelligence and demeanor will fade away now that he's adopting the Grundy identity, perhaps the qualities that will remain will include his love for Tabitha, his hatred of Barbara and Oswald, or even just his general sense of loyalty for whoever he's working for.

Conflating mob enforcer Butch Gilzean and undead villain Solomon Grundy may be a surprising choice, but Gotham loves to bring characters back from the dead. And there may be no more shocking example of that than adapting the story of Cyrus Gold.

More like this
Harry Lawtey Is Weighing Up The Price Of Success
By Olivia-Anne Cleary
Nicola Coughlan Shared A Lady Whistledown Excerpt From ‘Bridgerton’ Season 3
By Grace Wehniainen, Alyssa Lapid and Sam Ramsden
A New 'And Just Like That' Table Read Pic Confirms A Key Character's Return
By Jack Irvin and Grace Wehniainen
You’ll Definitely Recognise Both Of Ty Tennant’s Parents
By Maxine Harrison
Get Even More From Bustle — Sign Up For The Newsletter