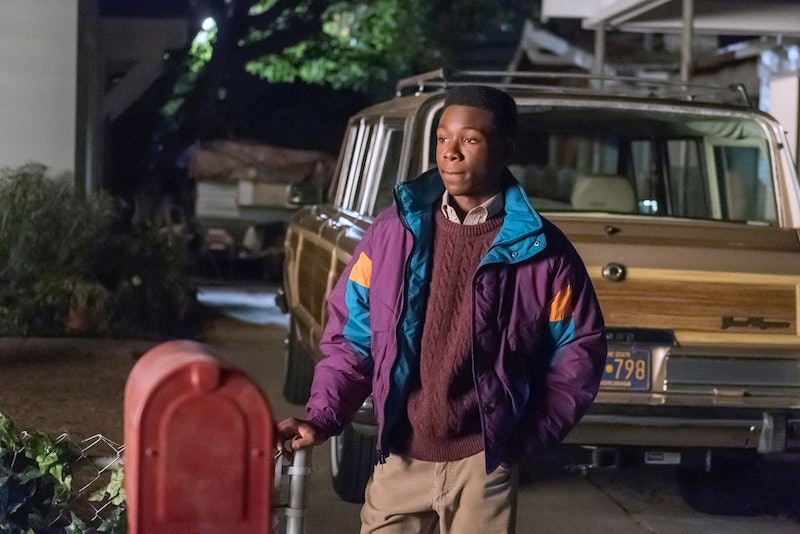 This Is Us has spent some time on Kevin’s teenage love life (Sophie, anyone?) but Randall has feelings, too. And, he may have Beth now, and they have an amazing relationship and two amazing children (serious relationship goals from those two), but hey — Randall had to start somewhere. Who is young Randall’s girlfriend on This Is Us? A mysterious redhead was there when tragedy struck

Because the time on This Is Us jumps around so much, it’s hard to tell where characters come in and where they leave. There’s one new character, though, that viewers noticed right away — Randall had a red-haired teenage girl consoling him right after he found out his father had (maybe?) died in a fire. Kevin was off somewhere with his girlfriend, Kate was hugging the family dog, and Randall was sitting in Miguel’s house, being consoled by a red-headed girl. Who is this mystery woman? Randall was always the shy type, so it’s hard to imagine him asking out a girl as a teen. Randall is the studious one. He’s the one with the laser focus for school who has to do everything so perfectly that he doesn’t have time for girls. Who. Is. She?

One possible answer is that she is not Randall’s girlfriend at all but Miguel’s daughter. Genes being what they are, this seems implausible, but it could happen that a blonde wife and a Hispanic man could birth a red-haired daughter. There could be some recessive genes in their family! We know from Season 1 that Miguel has children — he mentions them before Jack and Rebecca have the triplets — so that pretty girl could be a family friend that’s just trying to soothe Randall in a time of need. Or, maybe it's Miguel's daughter that Randall is dating. It does seem like she is a girlfriend, whoever she may be.

According to a tweet from Debra Birnbaum, Executive Editor for Variety, Mandy Moore, who plays Rebecca, said that Randall’s girlfriend is a clue about Jack’s death. How could that be?

Other Twitter users echoed the fact that Randall's girlfriend couldn't have been dropped in the show randomly:

So what does it all mean? There's nothing on the Internet (yet, at least) that hints to the identity of Randall's girlfriend, but in an interview with Entertainment Weekly, This Is Us creator Dan Fogelman waxed poetic on the Sliding Doors moments that make up a life:

"The small movements of our lives, and how big they can become if little things break the right way or the wrong way — I’ve always been fascinated by [the fact that] you could have met your husband or your wife if you had just not gone that way at the bar that night, or the friend hadn’t wanted to set you up. The great things in your life, how easily that sliding door could have gone a different way, as well as the tragedy. That’s part of our story."

This is interesting because it's not only pretty much confirming that everything in This Is Us is a clear decision in storytelling, but also because that red-headed, unnamed girl could actually play a huge role in Randall's life. He's married to Beth now, but how did redhead shape him? Why was she there? How did she impact the trajectory of Randall and how viewers know him now? There are so few shows on television that lay the groundwork for bigger things as well as This Is Us does. The fact that red-headed girl could be a big player in Randall's life going forward and we don't know her name or who she is yet makes for the best kind of television. It's TV that you want to hang onto, and This Is Us is the best at it.