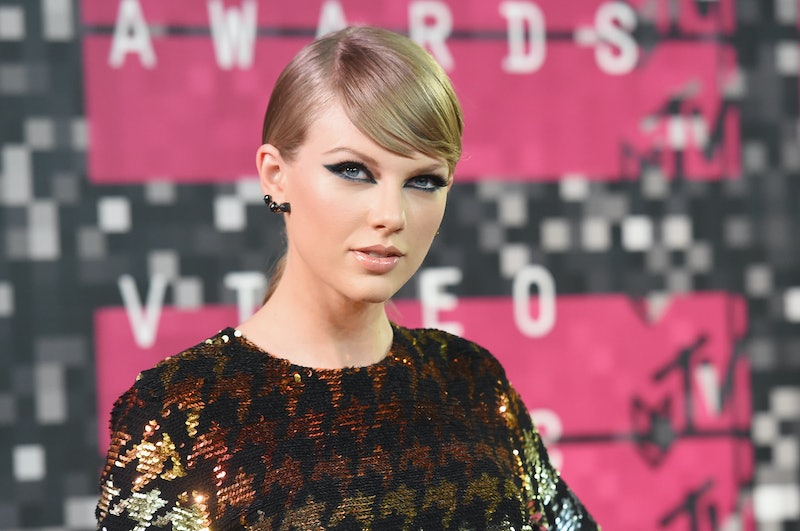 There's been so much speculation behind the upcoming release of Taylor Swift's new album, Reputation, and Swift herself continues to add to it. On Thursday, she posted a mysterious video to her Instagram account. The video includes a child saying "gorgeous" along with some chic imagery including the word. Who is the baby on Taylor Swift's "gorgeous"? There are some theories that Swifties are already starting to throw around in regards to the voiceover.

Maybe Swift enlisted one of her friends' kids to help for the fun project. Swift is already loving her godmother role to her friend Jaime King's son, Leo. According to King, via Us Weekly, Swift is "amazing" with her kids — "as she is with everybody around her," the actor added. It would make sense that if Swift had one of her friends' kids provide the voiceover, it would be her godson providing a possible intro for her new tune.

Another option could be that the voiceover was provided by one of Blake Lively and Ryan Reynolds' daughters, since Swift is good friends with the A-List couple. After the couple's daughter, Inez, was born, none other than Swift visited the pair to celebrate, according to E! News. One Swifty was also quick to tweet that both Lively and Reynolds liked Swift's Instagram post containing the video. (A search of the "likes" on the post show that Lively did like the post; Reynolds' screen name doesn't show up, but it's possible he unliked it.) Of course, Lively could just have liked the post so that she could support her pal. But, maybe she was so quick to like the post because one of her children is providing the "gorgeous" voiceover.

This Swifty thought that it could possibly be King's child, or maybe even squad member Lily Aldridge's:

Aldridge and Swift have been friends for a while. Aldridge was in Swift's classic "Bad Blood" music video and the two women can frequently be seen hanging out. Aldridge's daughter, Dixie, could certainly be the one saying "gorgeous" on the track.

Another fan came up with a theory that may blow the other ones out of the water: It's T. Swift herself voicing "gorgeous". Game changer alert! Twitter user @AllToooTay asked other Swifties if they were "forgetting that there's a video out there of her as a baby talking to her mom and saying the word gorgeous? That's where this is from".

The user did not include the video they were talking about. But, maybe Swift herself can back up their theory once she releases the track. That would be an amazing move on Swift's part if true. Using an old home video to add a little nostalgia to a new single? A genius move, honestly.

This Swifty was on the same page with who they thought was speaking in Swift's mysterious video. They also think that it's Mama Swift talking to a baby Taylor Swift for the new single. They said that the convo will be the opening lines for the track. Maybe these Swifties are on to something here?

This fan had a theory on who the baby is, and it puts a lot of other conspiracy theories out there to shame. @ClaydYila said that the voiceover is actually Swift's own baby. They said, "taylor isn't pregnant, she had the child already! it's a child of taylor, so of course it can speak already. that's the voice in #Gorgeous."

While this theory is almost definitely not true (and is probably a joke, anyway), imagine if this was Swift's child? That would be next-level wild.

Swift also posted a photo on Instagram that said, "Midnight Tonight Eastern" in the same color scheme as the "Gorgeous" video, meaning that the new single's release is only hours away. Swift fans everywhere are dying to know who exactly is voicing the word. Based on these theories, though, it seems like some Swifties may have already figured the mystery out.

More like this
Everything To Know About Taylor Swift’s 10th Studio Album, 'Midnights'
By Grace Wehniainen and Jake Viswanath
There's A Taylor Swift Easter Egg In Ryan Reynolds' 'Deadpool 3' Teaser
By Marina Watts
How Ghosts Inspired Kesha's New Music
By Jake Viswanath
Beyoncé’s Special Tribute To Sister Solange Was Both Touching & Hilarious
By Stephanie Topacio Long
Get Even More From Bustle — Sign Up For The Newsletter