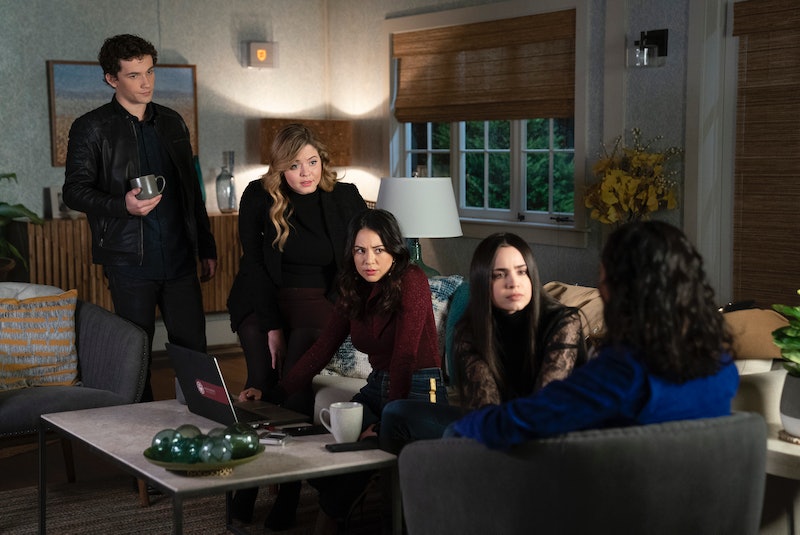 During the finale episode, the three Perfectionists plus Mona and Allison were all invited to join the Crimson Society. That was really just a front for The Professor revealing to the five of them that he/she has been watching. The Professor has footage of Taylor shooting Jeremy in cold blood and everyone jumping in to cover up the crime. If they don't comply with the rules of The Professor's "experiment," they will go to jail.

So far, phase one of the "experiment" was surveilling these select students and seeing how far they could be pushed. (Pretty freaking far.) The voice recording during the Crimson Society meeting also claimed to be Nolan's real killer — although the voice spoke about The Professor in the third person, so it's possible that Nolan's killer is just working for The Professor and relaying messages to the Perfectionists on their behalf. Or maybe The Professor killed Nolan and just likes talking about themselves in the third person. It's a villain thing.

There's already a few huge hints about who The Professor could be. For one, they seem to be a real teacher at the school. Zach greeted someone watching the Perfectionists on their computer in the student union as "professor," hinting that they're a well-known teacher there. And, they may be in the psychology department, because one of the psychology teachers was in communication with The Professor.

Alison decided that in order to catch The Professor, they needed to be able to study The Professor as much as the Perfectionists were being studied by him/her. Alison switched majors to psychology and she will now be Dr. Fielder's TA in that department. Dr. Fielder later seemed thrilled with this change, because she was on the phone (presumably with The Professor) saying, "I just hired Alison DiLaurentis as my new TA. She doesn't know it yet, but she's in."

Uh oh, Alison. Maybe switching to psychology wasn't the best idea. Anyway, since Fielder was talking to someone who seemed above her on the totem pole of whatever this situation is, it stands to reason that The Professor in question is a professor of psychology. And, what do you know? Viewers recently met someone who fits that description.

During the faculty speed meet and greet, Alison spoke to Professor Wagner whom Alison specifically pointed out was a professor of Psychology. How sketchy does she look, right?

Of course, it is possible that The Professor is someone else we've met like Dylan's music teacher Professor James, or perhaps Professor Granger who Alison originally TA'd for. Maybe it's the super shady Professor Gabriel of language studies who tried to get in Alison's pants after, like, six seconds. The only other professor mentioned was also during the speed meet and greet and it was Professor Zangulary, but he didn't seem to be all that notable at the time.

I'd put money on psychology department Professor Wagner as being the one who's torturing the Perfectionists. The Professor is conducting an experiment to see what lengths humans will go to and what they fear the most — sounds like a psychology study come to life. If Alison just joined the very people who are out to get her, she better be careful. The Professor may be a staff member at BHU, but that doesn't mean he or she won't hurt one of your faves.

More like this
The Best 'Grey's Anatomy' Intern Moments, From MAGIC to Glasses
By Grace Wehniainen
Who’s The Richest 'Grey’s Anatomy' Star? See The Net Worth Of Each Cast Member
By Hugh McIntyre
'The White Lotus' Season 2 Trailer Teases Multiple Affairs & Another Dead Body
By Bustle Editors
Dan Levy Appears In The Latest Teaser For The Weeknd's HBO Series, 'The Idol'
By Jake Viswanath
Get Even More From Bustle — Sign Up For The Newsletter