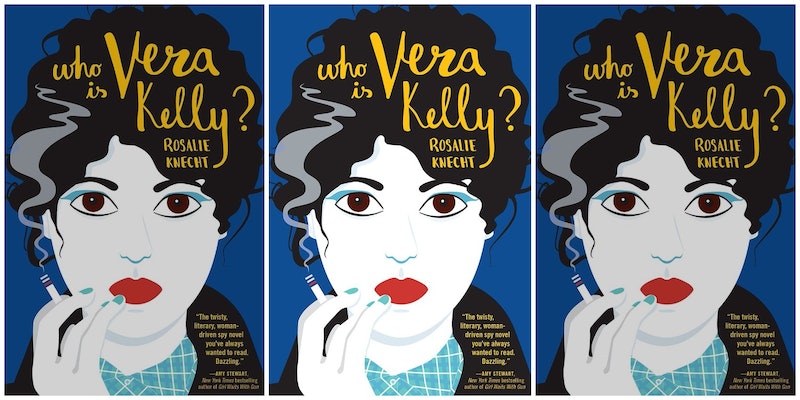 When you hear the phrase "spy novel," you probably picture a James Bond-esque man in his Aston Martin, surrounded by overly sexualized, glamorous femme fatales who inevitably end up dead by the end of the book. But when Rosalie Knecht set out to write Who Is Vera Kelly?, she knew she wanted her story to be different.

"I was a little bit annoyed at the way that women in the spy genre tend to be just like Scarlett Johansson," Knecht tells Bustle. "They're always like these insane sex bots, you know what I mean? And I was kind of more interested in how it would be to be a regular functionary."

Who Is Vera Kelly? is set in Buenos Aires, Argentina in 1966, during the first stirrings of the Argentine Revolution. Vera is a young American posing as a university student as she secretly records the comings-and-goings of a prominent politician and spies on a group of students with suspected KGB ties.

"They're always like these insane sex bots, you know what I mean? And I was kind of more interested in how it would be to be a regular functionary."

"I guess I was trying subvert the James Bond trope in two directions," Knecht says. "One was removing some of the glamour in the same way that a TV show like The Wire took the trope of the Law and Order cops who are always like swinging into action and rescuing a bunch of children, and turned it into this kind of bureaucratic nightmare. So, instead of it being this super high-shine, glamorous job, [I decided] to take it in the direction of being a job like many other jobs, which is kind of dangerous but also involves a lot of boredom and showing up for work every day."

Knecht also wanted to subvert the James Bond stereotype by exploring the genre through the eyes of a woman. "Women had those kinds of jobs too, to some extent. They were CIA," she says. "What would that look like? What would it look like if the spy figure was not also like constantly bedding Playboy bunnies?"

Knecht was partially inspired by her grandfather, a former CIA man who analyzed Soviet radio propaganda broadcasts during the Cold War. "It was an interesting time to be there. He had been with the CIA from before the war or during the war when it was the Office of Strategic Services, but he was kind of there from the founding of the modern CIA," says Knecht. "It felt accessible in a way that another historical time might not have felt accessible because it was sort of just out of reach for me."

"What would it look like if the spy figure was not also like constantly bedding Playboy bunnies?"

Despite her fascination with the CIA, she also sees this story as a mild critique of the agency. "The framework of the Cold War gave the CIA this feeling that it had kind of a moral free hand to intervene anywhere that they wanted in favor of any anti-communist regime, and the actual price for that was being paid by people on the ground," she says. "In this particular story, that plays out like a kind of a farce. She can see they — and by extension herself — have let themselves become so consumed with their own nonsense that they've just blindly wandered into the thing that had nothing to do with them."

Of course, Argentina isn't the only place where the CIA meddled during this time period, and this isn't the end of Vera's story. Knecht is working on a sequel, which centers on an incident in the Dominican Republic.

Who Is Vera Kelly? by Rosalie Knecht, $13, Amazon

In Who Is Vera Kelly?, the chapters alternate between Vera's time in Argentina and the story of her life before she became involved with the CIA. As her backstory unfolds, the forces that ignited her interest in espionage are revealed. "Vera Kelly is a person who is kind of on the run from herself in a lot of ways, and has a real difficulty letting people know her or having intimacy with other people, and that was an aspect of the spy genre that was my main interest," says Knecht.

This is further complicated by the fact that Vera is queer, during a time when homosexuality was still taboo. Throughout the book, Vera struggles to decode complicated romantic signals and stresses about her sexuality being found out by others.

Knecht says that she didn't begin the book with a lesbian character in mind, but it was a discovery she made early on in the writing process. "I was thinking like, what kind of a person under what kind of circumstances would choose this path?" says Knecht. "It just started to make more and more sense to me that she was gay because that's why the kind of normal path of middle class security for a woman of her generation and class is not open to her, or she doesn't want to take it."

"Vera Kelly is a person who is kind of on the run from herself in a lot of ways, and has a real difficulty letting people know her or having intimacy with other people, and that was an aspect of the spy genre that was my main interest."

At this time, society expected that young women like Vera would go to college, get married, and have children. But Vera isn't interested in that path, putting her in an especially precarious position. "It was like the idea of having all of that push her into the position where her way of being kind of doubled and concealed would make sense and would kind of work for her that she would feel in control of it," says Knecht. "I think that has been the struggle for her in the book. Both because of her personal background and her social position as a queer woman... and her being a spy she is used to concealing herself and hiding. How does she gradually learn to allow intimacy?"