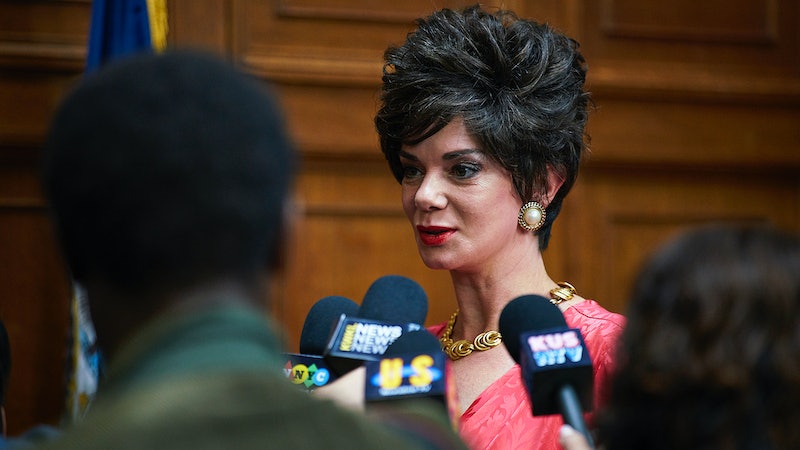 Sky Arts has been churning out in-house televisual delights for quite some time now, and looks like there is no chance of this entertainment train coming to a stop anytime soon. Especially in terms of its Urban Myths anthology series, which is now in its third season. The hit show is everything anybody who loves a bit of goss needs in their life. This season features the spectacular Joan Collins and will hit every single entertainment button imaginable. But, with such big boots to fill, who is Victoria Hamilton, the woman playing Collins?

The British actor has been working on both stage and screen for quite some time. She graduated from the London Academy Of Music & Art and went on to take part in the Royal Shakespeare Company's productions.

Hamilton isn't limited to stage productions, though. Oh no. She has made a bit of a name for herself in period dramas. She starred in Lark Rise To Candleford, Call The Midwife, and, more recently (and probably where you recognise her from), as the Queen Mother on hit Netflix show The Crown. A role which she played all too accurately.

Hamilton has been outspoken in the past about the issues faced by female actors in the entertainment industry.

Speaking at the Critics' Circle Awards, where she won the award for Best Actress for her role in Albion, she made a point of how far things have come, What's On Stage report:

"Going back ten years, actresses dreaded reaching this age because this was the age when everything just stopped or you would play nothing more than a wife or a mother and those were your roles. You would spend the rest of your life playing parts where you were saying to a man: 'What are you going to do next? ... To be given these incredible, rich, complicated, sexy parts is just amazing. I think there's a seismic shift in both theatre and film where people have realised that mature women can carry plays and can carry TV series and that it's a great untapped resource."

Although her words could not be more accurate, one woman who seems to have risen above all female age-related stereotypes is the one and only Joan Collins. The person Hamilton is playing in the latest season of Urban Myths.

Who doesn't love an anthology series? Whether it's on the scary side or more historically focused, anthology series are seriously where it's at. Sky Art's foray into the genre has seen them produce a show all about celebrities, which has a kind of weird and wonderful spin on real life events. In the past they have covered the likes of Charles Dickens, Marilyn Monroe, and Paul McCartney.

The 'Urban Myths: Joan Collins' episode will be look at Collins' court case with Random House in 1996. The case was stranger than fiction. Which is ironic, as it was relating to a cash advance Collins was given by publishing giant Random House for a novel. A novel which the publisher claimed was "unreadable," according to the Independent, and thus chose to sue her for the cash advance. The court case was filmed and now Urban Myths is staging a reenactment of the case along side lots of other "true-ish" bits. AKA world class entertainment.

Watch Urban Myths: Joan Collins on Wednesday May 1 on Sky Arts at 9 p.m.