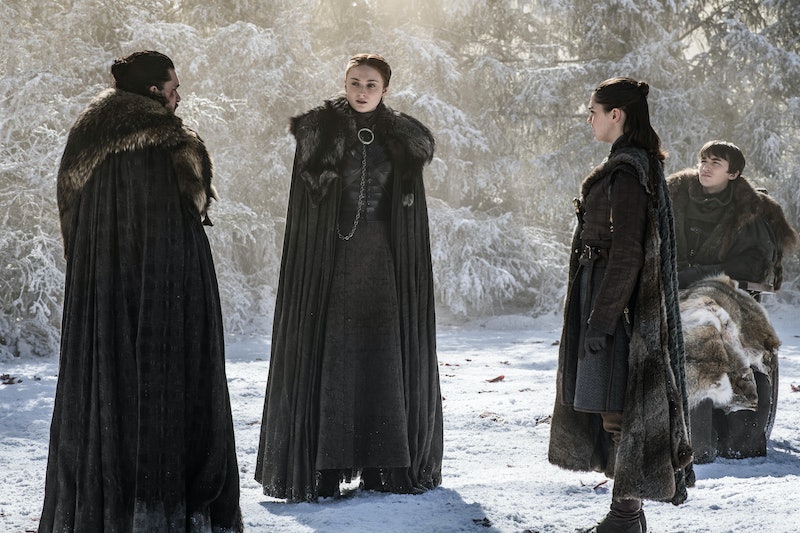 When Game of Thrones started, Jon Snow was just a bastard. He wasn't anywhere near the fight for the Iron Throne. Of course, that was before it was revealed that he was the son of Lyanna Stark and Rhaegar Targaryen, making him the true heir to the Iron Throne. Now that he has a claim to the ultimate prize, it changes everything, including Daenerys' plans. So it really does matter who knows about Jon's true parentage on Game Of Thrones now that the throne is in their grasp. And with that list of people growing, it's only a matter of time before everyone knows and the game changes yet again, whether Jon is ready for the consequences or not. Spoilers for Game of Thrones, Season 8, episode 4 ahead.

In the May 5 episode, "The Last Of The Starks," Jon revealed his parentage to his sisters, Sansa and Arya, swearing them to secrecy. He wanted them to know the truth, but he also wanted to be clear: he doesn't want to sit on the Iron Throne, and he fully intends to bend the knee to Daenerys once they defeat Cersei. Unfortunately, not everyone is down with that plan, specifically Arya and Sansa, who don't trust Dany. They might have been sworn to secrecy, but, when you play the game of thrones, sometimes, you have to bend the rules, and thus the circle of people who know about Jon continues to grow, which can only mean more drama ahead. Here's a list of everyone who knows, and who they think should sit on the Iron Throne.

In the show, both Bran and Sam found out about Jon's true parentage first. And they both had very different reactions to the news.

Bran doesn't really seem to have an opinion on who ends up on the Iron Throne. However, Sam is Jon's best friend, so of course he'd rather have him lead the Seven Kingdoms. In fact, he told Jon as much after he learned that Daenerys killed both his father and his brother. The vengeance and cynicism he might feel for the Dragon Queen would make it hard for him to bend the knee for her, even if it was what Jon wanted.

Jon just found out about his parents a couple episodes ago, and though his first response was to aggressively assert that Ned Stark was his father, it seems he's gotten a bit more used to the idea. Despite revealing the truth to Dany and his siblings, Jon has shown he doesn't want to be King, something he emphasized again in this most recent episode.

Jon didn't really tell Dany about his Targaryen ancestry at the best time. He dropped that bomb on the eve of the Battle of Winterfell, as the Night King and his horde were breathing down their necks. But, now that she's had some time to process, Daenerys seems very skeptical and unsure. Though she doesn't seem to be fazed by the aunt-nephew relationship part, she is definitely disturbed by his new claim to the throne.

In this new episode, Dany saw how loyal everyone in the North is to him. She used the knowledge that he loves her to manipulate him into keeping his parentage a secret because the only thing keeping the people of the North on her side is Jon's pledge to her. If they found out that he actually has more right to the throne, they'll back him for King whether he wants them to or not.

Dany may very well love Jon, but the Iron Throne is endgame for her, and she'll do whatever it takes to get it.

Despite Jon seeing how much it meant to Daenerys to keep his parentage a secret, he felt compelled to tell Sansa and Arya in the most recent episode. Viewers didn't really get to see how Arya felt about it, though her loyalty to her family suggests she'd never tell anyone and would respect his wishes to keep this secret. Sansa, on the other hand, sees an opportunity, and her distrust of Dany pushes her to reveal the truth to Tyrion.

Just as Daenerys had predicted, Sansa is the one to spill Jon's secret. And, also as predicted, once the secret is out, there's no containing it, as Tyrion promptly reveals the truth to Varys.

Varys had already started doubting Daenerys at this point. He used to be so sure that she was the best suited to sit on the Iron Throne, but he let it known that he serves the realm, not a king or queen. Everything he does is for the good of the people, including who he backs for the throne. So seeing that Jon's another option, and that Daenerys isn't listening to him like she swore she would if making a mistake, Varys is very much at odds with Dany.

Tyrion is probably the last one, of those who know Jon's parentage, who is sticking with Daenerys as his pick to rule on the Iron Throne. He does fear her, as Sansa pointed out, but he also sees that Jon doesn't want the throne. Plus there's probably a part of him that does still think Daenerys is the best fit. Whether it be his father, or Cersei, Tyrion has shown that he holds faith in people until the bitter end. His loyalty to Daenerys as her hand, is no different.

Other than Tyrion, Jon is also the only one who seems to back Daenerys as the heir to the Iron Throne. But now that eight people know, more will definitely find out. As Dany pointed out, sharing it with anyone else was a foolproof way to alert everyone, and Jon did it anyway. It's only a matter of time before it gets very messy, and it'll be interesting to see how Jon handles this, and if he'll lose faith in Daenerys as well.