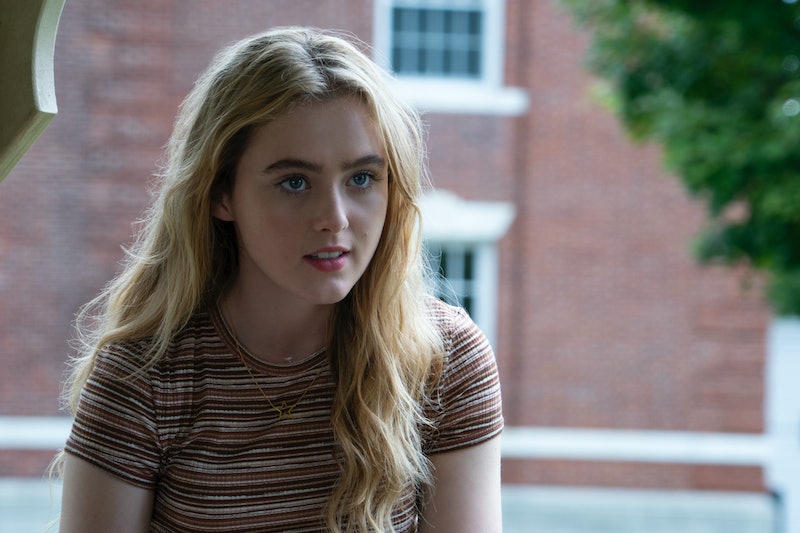 Picture this: you're a teen living in a tiny New England town, and after a short school trip, you return to find that all the parents and authority figures have suddenly vanished. Do you wait until they come back? Do you try to find your way home? Or do you rebuild your own society and make up your own rules? That's the premise of Netflix's new YA drama The Society, starring Kathryn Newton as Allie alongside an ensemble of fresh and familiar faces. As reported by ComingSoon.net, Newton's character is a high schooler who hates being known as Cassandra's (Legion's Rachel Keller) younger sister. "Whatever Allie's strengths are," the description goes, "she has very little sense of them."

According to Newton's IMDb page, she got her start playing Louise Brooks on Gary Unmarried. She's also been in films including Bad Teacher, Paranormal Activity 4, Blockers, Lady Bird, and Three Billboards Outside Ebbing, Missouri, so chances are, you know her from somewhere. Sci-fi fans recognize her from a stint on Supernatural; HBO fans know her as Reese Witherspoon's daughter, Abigail, on Big Little Lies, and Pokémon fans will see Newton as Lucy Stevens in the new Pokémon Detective Pikachu movie. The 22-year-old actress has had a big couple of years in terms of her career, and with the buzz The Society is getting, it doesn't seem like she's slowing down anytime soon.

For Newton, though, acting has never felt like work, but rather, a creative outlet. As she told Nylon in 2017:

"I've never looked at acting like a job. It's never been like that. The closest I've come to a nine-to-five was [Gary Unmarried] because everyone knew when you'd be getting in and getting out. But with film, it's not like that. When you go to work, real life almost pauses, if you're lucky enough to land in something where you can let go and forget yourself. The whole time, you're creating around people who are interested in the same things you are, working together to make something great. I don't think it's right to call it work."

When she's not on set, Newton is on the golf course, mostly because she finds the mechanics of it soothing. "Golf is a very individual sport, and it's not subjective," she told Nylon. "With acting, you never know how you're doing or why you didn't get a job. Golf made me realize that when you put work into something and accomplish it on your own, it's just you. It's not about the other people you're competing against, it's just you and the club and the ball and the course."

More like this
Everything To Know About 'The Midnight Club' Season 2
By Kadin Burnett
Shonda Rhimes' Net Worth Makes Her One Of The Wealthiest People In TV History
By Hugh McIntyre
'Firefly Lane' Season 2 Will Be The Show's Last — But There's A Twist
By K.W. Colyard and Grace Wehniainen
The 'Heartstopper' Cast Were Spotted Filming In A Major City
By Nola Ojomu and Sam Ramsden
Get Even More From Bustle — Sign Up For The Newsletter