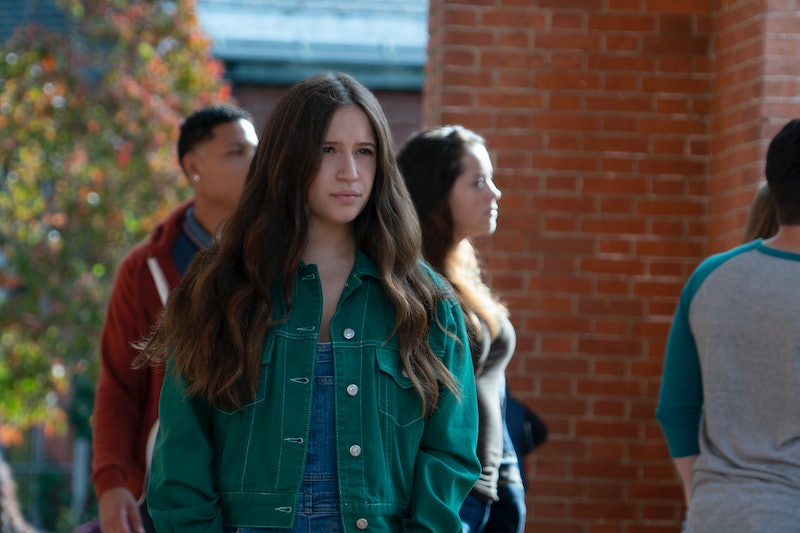 Netflix's new drama, The Society, follows teenagers who find themselves trapped in a world in which their parents have suddenly vanished. Now, they have to learn how to fend for themselves and work to establish a new civilization. One such teenager is Becca, played by Gideon Adlon. Her character doesn't get much screen time in the show's trailer, but anyone who's seen seen Better Things or Californication may already know a thing or two about her — er, at least a thing or two about her mom.

If the name didn't tip you off, Gideon is the oldest daughter of Pamela Adlon — ubiquitous funny woman and voice actor. Adlon created, writes, and stars in Better Things, which is semi-autobiographical. As such, Gideon is a jumping off point for Max Fox (Mikey Madison), the eldest daughter of lead character Sam (Adlon).

Having your mom write your life into a show might not go over well with some kids, but Adlon told Bustle in an interview that her children love it. "[Better Things] gives them a voice, and it gives their friends a voice, and their friends are seen," she said. However, Gideon did have one gripe when she spoke to The Cut last year. "Sometimes it makes me annoyed that people are like, 'Oh my God, I can't believe you did that.' And I'm like, 'Oh my God, I didn’t actually do that,'" she explained. "Like, I'm not as whiny as Max."

That being said, Gideon is an actor in her own right, and as her star rises, fans will get to know the real her — not the caricatured version of her. Ahead of The Society, here's where you may have already seen her.

The Mustang is an indie film executive-produced by Robert Redford, which follows the true story of a convict named Roman (Matthias Schoenaerts). The inmate joins a rehabilitation program where he works with wild horses, and Roman ends up bonding with a particularly feisty mustang. Gideon plays his daughter, Martha, with whom he has a strained relationship When the film premiered back in March, Gideon wrote on her Instagram, "[The Mustang] is a piece of cinema about reform and education. Those are two things I really want for the world."

While Gideon has had other roles, her biggest to date was in the 2018 comedy, Blockers. She played Sam, one of three teenage girls who make a pact to lose their virginity on prom night. The only problem, however, is that Gideon's character is gay and doesn't want to hook up with a guy at all. Thankfully, she comes out to her friends and dad over the course of the movie, and doesn't go through with the pact. Gideon's Society co-star, Kathryn Newton, also starred in Blockers, so the show is a bit of a reunion for them.

In Season 3 of the ABC series American Crime, Adlon played a sex worker named Tracy, who killed Shae, one of her coworkers.

In a 2016 episode of the Boy Meets World spinoff, Adlon played a minor character named Felicity, who got into a fight with her best friend, Peaches.

Even if none of these characters sound familiar, it doesn't seem like the young Adlon is going anywhere anytime soon, so her role as Becca in The Society will likely lead to even bigger and better things (pun intended).

More like this
Mike Flanagan Teases 'The Midnight Club' In This Exclusive, Creepy Clip
By Grace Wehniainen
Caleb McLaughlin Details Racism From 'Stranger Things' Fans
By Radhika Menon
Glenda Cleveland Died 2 Decades After Trying To Turn In Neighbor Jeffery Dahmer
By Brad Witter
What’s New On Netflix: Ana De Armas’ 'Blonde' & A Nick Kroll Special
By Arya Roshanian
Get Even More From Bustle — Sign Up For The Newsletter