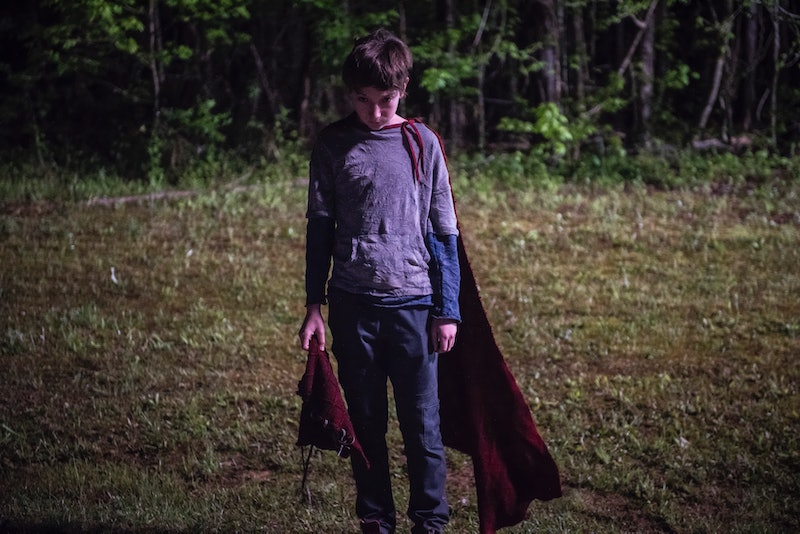 An alien vessel crash lands in the rural American countryside. A childless couple examining the impact site find a baby in the wreckage, and adopt him as their own. As the young man grows, he shows signs of preternatural powers and... starts violently using them on the townspeople who misunderstand him. Brightburn, out May 24, takes the familiar Superman origin story and turns it into horror by adjusting the presumption that those with great power would use it with great responsibility. Jackson A. Dunn plays Brandon in Brightburn, balancing the sympathy of being bullied with the horror of fulfilling his darkest revenge fantasies?

Brandon is the adopted son of Tori (Elizabeth Banks) and Kyle (David Denman). Though Brandon's parents raise him to be a respectable, thoughtful member of society, Brandon's mother inadvertently inflates his ego acknowledging his burgeoning powers, telling him repeatedly he's different, special. His peers think he's just a weirdo. Unfortunately for everyone, his specialness comes without morality, as he unleashes his newfound powers for sadistic curiosity and revenge.

This is a heel turn for Dunn, who also briefly played a 12 year-old Scott Lang in Avengers: Endgame this same year. That's an interesting coincidence, considering the themes of Brightburn. Speaking to iHorror, director David Yarovesky says that breaking the public perception equating superpowers with good intentions was the point of the film. "I’ve always been so pessimistic about the concept of superheroes ... I’ve always had a difficult time accepting the idea that an otherworldly figure with superpowers was likely to be altruistic. I think people, especially those who have grown up believing in superheroes, are going to lose their minds when they watch this film and see how we’ve taken the concept of the cape and costume and turned it into something so dark and evil.”

Taking a surly teen and amplifying their rage with supernatural abilities existed before Brightburn with films like Carrie and The Craft, and the idea of villainous use of superpowers has existed since Ultra Humanite first menaced Superman in 1939's Action Comics #13. But Dunn brings a quieter menace to the role of villain. Now 15, in the film he's playing 12, a tween just growing into himself. Fortunately, here's where fiction fails to mirror reality.

Though he plays an isolated only child in the film, Dunn's far more outgoing in real life. His acting career started far earlier, as he debuted at age four as The Grinch in a preschool play. Dunn's IMDB profile notes "he has always enjoyed performing and public speaking, and at the age of 10, he asked to attend an open audition in San Diego". For a kid that's pretty gutsy, but it landed him a recurring role on TV show Shameless, which in turn led to other roles, including on '80s wrestling drama GLOW and Nickelodeon mockumentary Legendary Dudas.

His Instagram's dotted with nods to his upcoming films, including Brightburn, but the main focus is short, edited videos of him grinding concrete and kickflipping in sunny climes. Skateboarding's just one of the sports he enjoys, along with snowboarding and biking — the inverse of Brightburn Brandon's insular, obsessive doodling. Dunn doesn't have any upcoming projects noted, so for now, looks like the only superpowers he's working on are a sharp ollie off the curb. But there's got to be more to come from this young actor, so stay tuned.

More like this
These 25 International Horror Movies On Netflix Prove Fear Is A Universal Language
By Bustle Editors
26 Ghost Story Podcasts To Get You Ready For Halloween
By Jessica Booth, Mia Mercado, JR Thorpe and Emma Carey
Everything You Need To Know About The 'Knives Out' Sequel
By Bustle Editors
A New Scooby-Doo Movie Confirmed Velma Is Gay & Twitter Is Pumped
By Radhika Menon
Get Even More From Bustle — Sign Up For The Newsletter