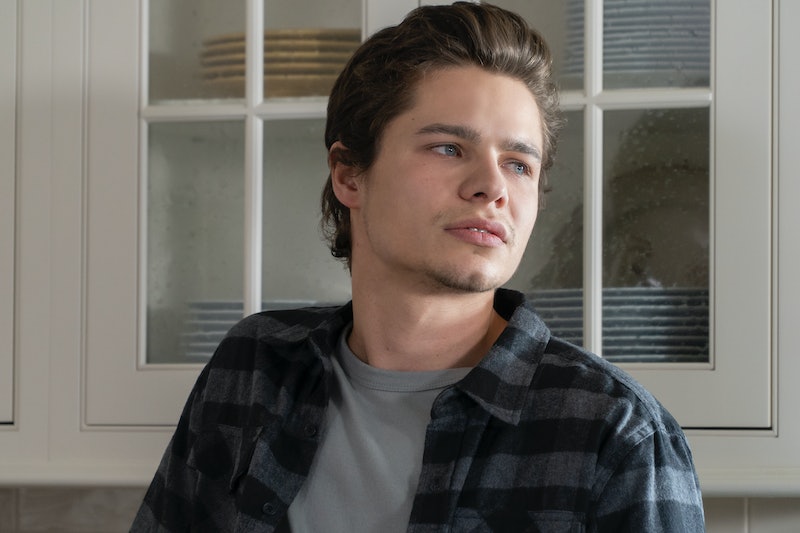 What happens in a world where teenagers are left to their own devices? Do they prove that they really are smarter than adults, or devolve into violence and savagery? And how long can they possibly survive with low resources and high hormones? Netflix's The Society, premiering May 10, explores this unthinkable struggle for a group of high school kids who return home to an abandoned town. But of course, the story wouldn't be complete without a villain: in The Society, that's Campbell, played by Toby Wallace.

If you don't recognize Wallace, it's because he's a newcomer to American audiences; The Society marks his U.S. TV debut. According to the bio on his management company's website, the actor is originally from the UK, but moved to Australia when he was young and eventually got into stage and film acting. In 2009, he was nominated by the Australian Film Institute for his role in Dark Frontier when he was only 13 years old, which would make him approximately 23 years old today. Per IMDb, Wallace appeared in Australian projects including a soap opera called Neighbours, 2016 thriller Boys In the Trees, and TV drama Romper Stomper before landing a lead in The Society. He's also currently filming an Australian drama called Babyteeth, but hopefully after The Society, he'll add some more American titles to his credits, too.

Wallace doesn't seem to have given a lot of interviews so far, but his Instagram page sheds a little more insight on his personality. His posts are pretty infrequent, but those he's shared often show him holding a camera, hanging out with friends on vacation, and occasionally promoting his latest projects. Interestingly, he doesn’t appear to have a Twitter or Facebook account, which is surprising considering he's a twenty-something rising actor, but perhaps he wants to keep his life a little more private.

Overall, Wallace seems like a chill, low-key guy, but Campbell is quite the opposite. In The Society trailer, he stirs up trouble by asking some fellow classmates if they like the "way things are," assumedly referring to the fact that Cassandra has been put in charge of their new world. When someone asks what he has in mind, he says, "We're not going to ask for power. We're going to take it." So much for living in peace and harmony, right?

When Cassandra's sister, Allie, confronts Campbell on the steps of a building and says that she's not afraid of him, he retorts that she "should be" before sauntering off to presumably create more chaos. Campbell doesn't seem like the kind of person who enjoys being told what to do, and this new dystopian society could be his perfect opportunity to seize control. It's not clear if Campbell, Cassandra, and Allie had any relationship or conflict before the world fell apart, but they certainly have major beef now.

We don't know yet if Campbell will survive the show's first season, but hopefully Wallace's performance will draw in a new legion of fans and continue to build his acting career.