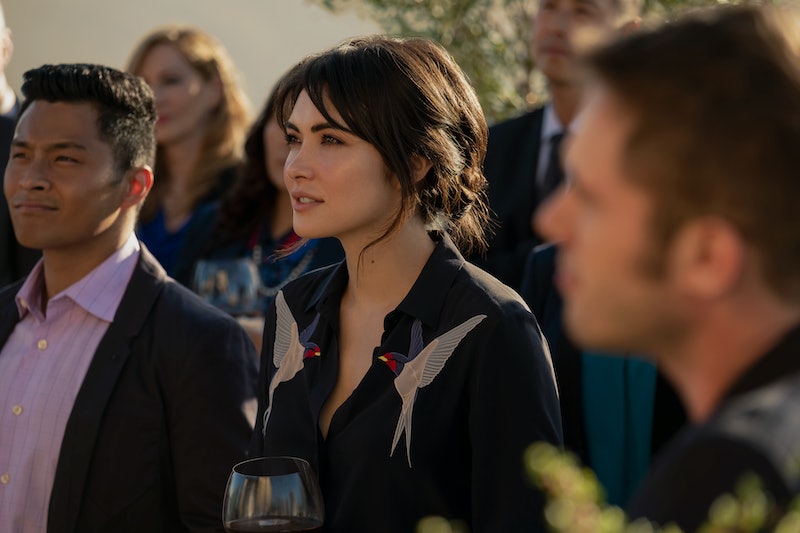 Watching Renée Zellweger play Anne Montgomery, a powerful titan of industry who takes pleasure in manipulating everyone around her, may be the main draw of Netflix's What/If, but the show wouldn't work if her character didn't have people to manipulate. Enter Cassidy, played by Daniella Pineda. She isn't directly under Anne's spell, but she's still undeniably affected by those who are.

What/If asks a simple question of its characters: what happens when someone decides to stop playing by the unspoken rules of society and start toying with people like puppets? In Anne Montgomery's case, this means offering a young scientist, Lisa (Jane Levy), a staggering investment in her med tech startup Emigen for one night alone with her husband Sean (Blake Jenner), after which the couple is never allowed to discuss what occurred that evening. Of course, Lisa and Sean are the ones getting embroiled in this little experiment, but Cassidy, Emigen's CFO, probably isn't going to just stand by as her partner's life starts to implode. She'll have to make sure the company stays on track while Lisa deals with any potential consequences from making a deal with Anne, which may not work out too well in Cassidy's favor.

The Hollywood Reporter's Leslie Goldberg describes Cassidy as "an analytical, conscientious and work-obsessed employee," which suggests that while she may be shrewd enough to stay out of Anne's grasp, she might be too busy picking up the pieces for Lisa to do anything about what's happening. And as Goldberg continues, "Cassidy is the kind of woman who does the right thing, even when no one's looking — a quality that will come to haunt her when she is set up to take a big fall."

Anne's manipulation begins by offering money for a night with Lisa's husband — but if that meeting is just about sex, why is Anne forbidding Sean from disclosing anything? Could she be using him for something else? Something illegal or dangerous? Or perhaps even both? Will Anne get Lisa to do something so heinous that the only way for her to save herself is to throw her business partner under the bus? Whatever Anne does that indirectly complicates Cassidy's life, it seems as though she may not be long for the world of What/If.

However, that isn't necessarily a bad thing for fans of Pineda, because the actress already has an impressive project lined up after What / If. Here career has thus far spanned major blockbuster action movies like Jurassic World: Fallen Kingdom, sitcom affairs like The Detour, and supernatural drama including The Vampire Diaries and its spinoff The Originals.

After What / If, Pineda will be staying on Netflix, but next time she'll be in the far reaches of space aboard the titular spaceship in Cowboy Bebop alongside John Cho. So while Pineda's time on What / If ends up being short, it's clear that Cassidy will play a significant role in how the series unfurls.

See where she ends up when What / If hits Netflix May 24.

More like this
Watch The Thrilling Teaser Trailer Of 'Shadow And Bone' Season 2
By Gretchen Smail and Jack Irvin
If 'Entergalactic' Season 2 Happens, You Could Get A New Kid Cudi Album
By Kadin Burnett
Here’s Where You Can Stream 'Schitt's Creek' After The Comedy Leaves Netflix
By Brad Witter
Jeffrey Dahmer’s Arresting Officer John Balcerzak Got His Job Back After Being Fired
By Grace Wehniainen
Get Even More From Bustle — Sign Up For The Newsletter