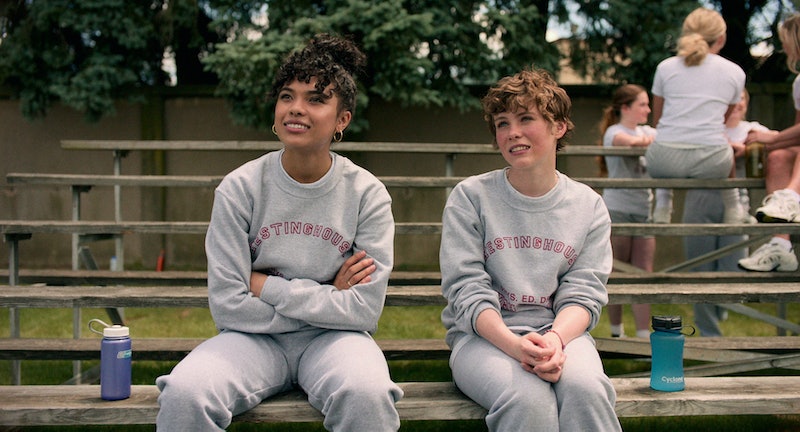 Netflix's dark new YA series I Am Not Okay with This stars two Sophias — Sofia Bryant, who plays Dina, just spells her name with an "f." Helmed by Sophia Lillis as Sydney, the show follows a teenage girl who suddenly develops superpowers while trying to navigate the day-to-day growing pains of being a teenage girl. Complicating matters is Dina, Sydney's best friend who Sydney is also starting to realize she may have feelings for.

In contrast to Sydney — who's deep in the throes of teenage angst — Bryant described Dina to KDKA Radio as "a bubbly, effervescent girl that everyone really deserves as a best friend." She told The Pitt News she was drawn to the show because it's "like X-Men meets Lady Bird all wrapped together in a John Hughes bow," but also because the story feels "so real," she added to KDKA.

At 20 years old, Bryant isn't that far removed from the hallowed halls of high school, so it's easy to see how she could relate to her character. In fact, this is her first big role: though her professional acting credits extend back to 2015, she's only had a handful of episodic stints on shows including The Code, Suspicion, Blue Bloods, and The Good Wife. According to The Pitt News, she also has a background in musical theater, and has appeared in commercials for products like Coke, Airheads, RingPops and more.

Outside of acting, Bryant seems like a typical young woman. Her Instagram feed is full of photos of her hanging out with friends, making late night diner runs, and lamenting her 1 p.m. bedhead. She also has a number of pictures of her spending time with her I Am Not Okay with This castmates, who Bryant became close friends with during filming. "We went climbing in caves for Wyatt's [Oleff, who plays Stan] birthday and it was just a few of us and all of our inside jokes and best memories were from that trip,” Bryant told Pitt News.

See their bond come alive onscreen when I Am Not Okay with This premieres on Feb. 26.