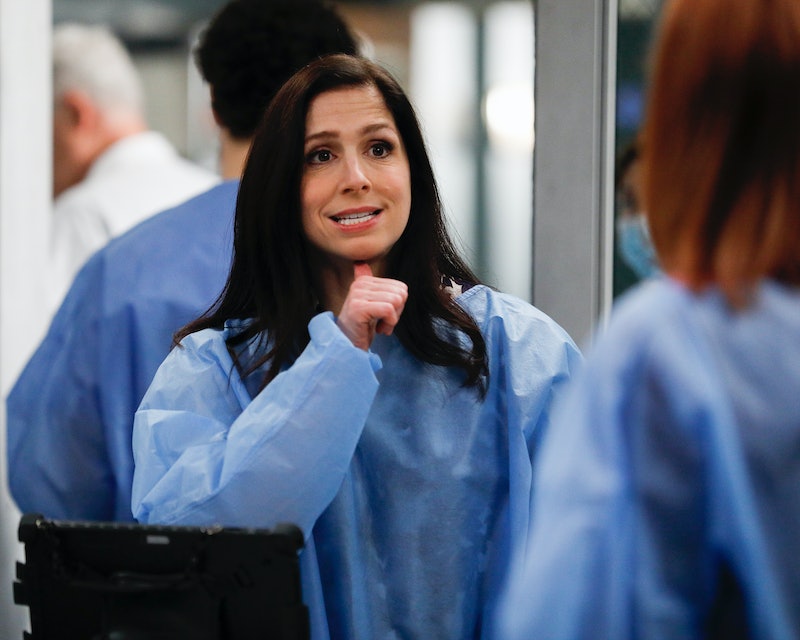 There's a new doc in town at Grey Sloan, and not a moment too soon. Dr. DeLuca has called in the cavalry to help him with his mysterious, incurable patient… and the cavalry has arrived in unexpected form. Dr. Riley on Grey's Anatomy makes her first appearance in Season 16's 13th episode, "Save The Last Dance For Me," as the genius diagnostician is flown into Seattle from San Francisco to help get to the bottom of what's ailing poor Suzanne, Andrew's patient who has been suffering from unknown maladies ever since her routine appendectomy.

While Dr. Riley is an unknown quantity to the surgeons of Grey Sloan, the woman who plays her, Shoshanna Stern, may be a familiar face to television audiences, thanks to her roles on popular dramas over the past couple of decades. After putting in her time doing guest star roles on the likes of Boston Public, ER, and The Division, Stern booked her first starring role on the 2003 ABC thriller series Threat Matrix, on which she played a member of Homeland Security's anti-terrorism task force.

Although the show only lasted one season, it helped raise Stern's profile and land her roles on other shows… like the popular Showtime comedy Weeds, on which she recurred throughout the first two seasons (and again in the final season) as Silas' girlfriend, Megan. Stern's other roles include recurring stints on Lie To Me and Supernatural, as well as the Sundance TV series This Close, which she co-created and stars on alongside fellow deaf actor Joshua Feldman, and which just recently aired its second season on the network.

Stern's casting on Grey's Anatomy is actually a historic occasion, as Dr. Riley will become the first deaf doctor in a major starring or recurring role on any television show ever — a fact that hasn't gone unnoticed or unrecognized by Stern herself. "I couldn’t believe it when I found out Dr. Riley was going to be one of the first deaf doctors not just on Grey's, but on all of television," Stern told ET about the significance of her casting. "I was like, 'No, that can't be right?'"

Stern's participation in the show involved more than just showing up to set and reciting lines; she was integral part of the process of creating the character. "Grey's was the most collaborative experience I've ever had," she said. "Apart from that initial two-hour-long conversation we had in the writers' room where I brought folders of research I'd done and the ideas they'd inspired, I got to share thoughts on the scripts when they were ready."

"I couldn’t believe it when I found out Dr. Riley was going to be one of the first deaf doctors not just on Grey's, but on all of television. 'I was like, 'No, that can't be right?'"

She has particular praise for the director of her debut episode, longtime Grey's cast member Jesse Williams (who portrays Dr. Jackson Avery.) "[Williams] asked to meet with me before we shot to map out not just how Riley would communicate, but also the kind of stuff I'd need from him blocking-wise as a deaf actor. He honestly blew me away."

Stern has nothing but good things to say about her time on the ABC series so far. "Grey's has done really wonderful things with [inclusivity]," she said. "One of the reasons I love the show is because it really embraces using the platform it has to educate people. A lot of other shows are afraid of doing that, but not Grey's." While it's crazy that we're still talking about "firsts" like this in the year 2020, Stern is hopeful that her casting and the character of Dr. Riley will bring about positive change in the world. "I think having a deaf doctor on a show like this could change, even save lives."

I know at least one person whose life could use saving; here's hoping Dr. Riley will be able to figure out what's wrong with Suzanne before it's too late.