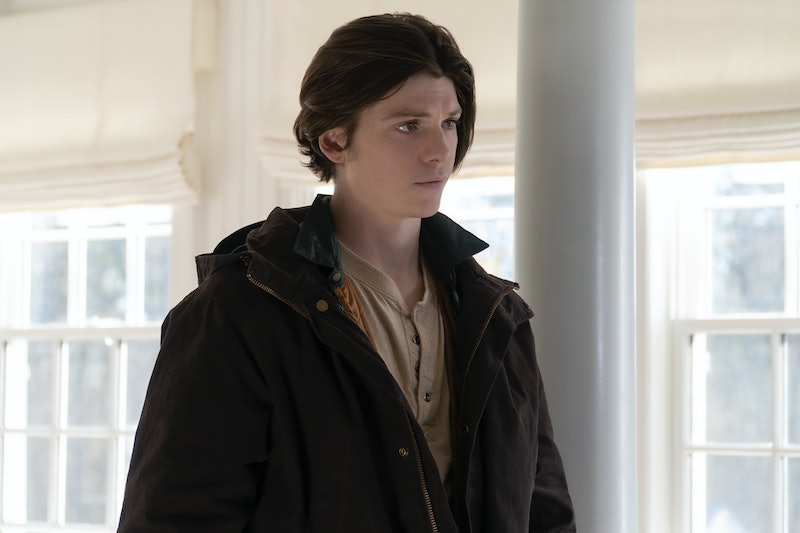 One of the best things about Netflix shows is the wide variety of talent they bring to the table. Some series, like Santa Clarita Diet, are helmed by well-known names (who doesn't know Drew Barrymore?) while others introduce viewers to fresh faces in the acting world. The streaming service's latest YA drama, The Society, is looking to do the latter with a relatively unknown ensemble cast portraying a group of teens who are left to their own devices after all the adults in their town mysteriously vanish. One of these new faces is Jack Mulhern, who plays Grizz.

According to Deadline, Mulhern scored his first role right out of college: in 2017, he was chosen to portray lead character Tyler Locke in the pilot of Locke & Key, a horror-fantasy series based on the comic books of the same name. Unfortunately, Hulu did not green-light the series for a full season, and by the time the show was picked up by Netflix in 2018, Mulhern's part had been recast. Luckily for Mulhern, however, he then landed his role in The Society, so he'll be getting his big TV debut one way or another.

Outside of the show, Mulhern has somehow found a way to be a social media ghost with no Facebook, Twitter, or Instagram. It makes sense for him to not have full-blown fan pages, since he's just starting out, but as a kid in his early 20s, it's quite surprising that he doesn't have any personal pages (though it's possible he has them under different, not-easily-searchable names). He also hasn't done many interviews, so it's hard to glean much information about him. But it's better to be a little mysterious than to have cringey tweets or quotes from 2012, right?

According to one (and maybe his only) interview, Mulhern appears to have gone to Skidmore College in Saratoga Springs, New York. He talked mostly about the technical aspects of a multi-media performance he wrote and directed for school, so again, the interview doesn't reveal much about who Mulhern is outside of his acting career. But perhaps it hints he'll be interested in getting behind the camera down the line?

As for Mulhern's Society character, a jock, the trailer only shows sporadic clips of him. We see Grizz partying hard with the other teens, presumably before their lives changed forever. And he later admits that everyone is way in over their heads, which seems like an understatement after watching them threaten each other amid a brewing power struggle.

Grizz seems to be a good guy, unlike several of the jocks who run with the town's resident baddie, Campbell. Because of that, he'll likely end up coming into conflict with his former teammates, who will expect him to stand by them no matter how shady their plan. Grizz also has the popular teen TV guy look down to a science with long, dark hair and a brooding gaze. We may not know much about Mulhern, but he's definitely going to be the internet's new boyfriend, so hopefully we'll see more of — and learn more about — him soon.

More like this
Nicola Coughlan Shared A Lady Whistledown Excerpt From ‘Bridgerton’ Season 3
By Grace Wehniainen, Alyssa Lapid and Sam Ramsden
'Elite' Season 6 Is Arriving Sooner Than You Think
By Gretchen Smail and Grace Wehniainen
What’s New On Netflix: Ana De Armas’ 'Blonde' & A Nick Kroll Special
By Arya Roshanian
Devi Is Going To Meet A “Smoldering Bad Boy” In ‘Never Have I Ever’ Season 4
By Jack Irvin and Gabrielle Bondi
Get Even More From Bustle — Sign Up For The Newsletter