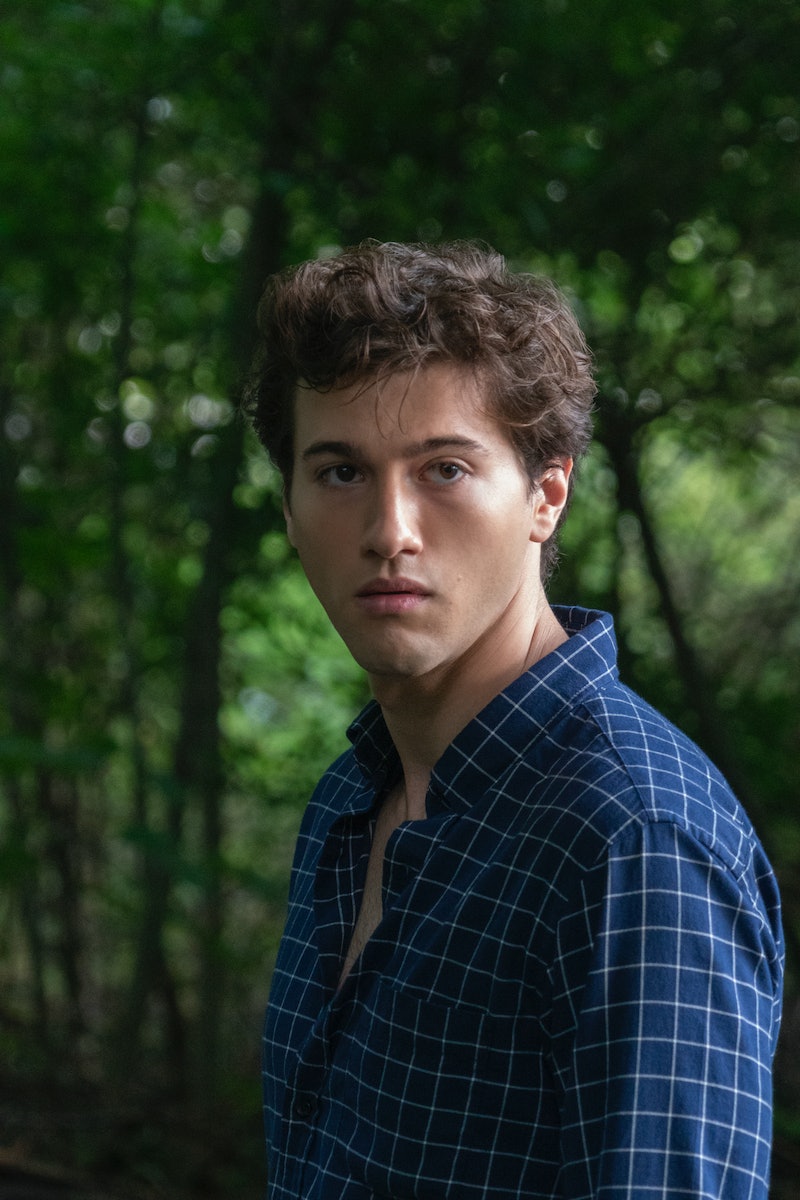 As is the case with many teen dramas, Netflix's The Society has the potential to boost some young actors to a new level of stardom. The series follows a group of teenagers who return home from a school trip to discover their town is completely empty — no adults, no Wi-Fi, no cell phone data. Even the roads leading out of town are cut off by a thick forest that wasn't there the day before. It's a confounding, twist-filled premise, but before diving into the new YA mystery, let's get to know some of the new faces you'll see — beginning with Alex Fitzalan, who plays Harry on The Society.

You might recognize Fitzalan from another project with a spooky theme. Last year, he starred as Tom in Slender Man alongside The Act's Joey King. According to his IMDb page, prior to that, Fitzalan was in just a few TV movies and short films — The Society appears to be his first recurring role of any kind. A few of the short films he's been involved in can be found on YouTube, if you're looking for some more Fitzalan content after blazing through The Society's 10-episode first season.

As for Harry, the character has some deep-seated demons he's trying to overcome. On the surface, he's a rich dude who doesn't care for sharing, but he has to get used to it. Resources are limited when your town is seemingly the only thing left on Earth. However, he's not as ruthless as some of his fellow high schoolers.

There's not a whole lot more information about Fitzalan, as none of The Society's cast members appear to have done much press about the show yet. But the actor does have a (short) Instagram feed with a few photos — as well as teasers about the show — that shed a little bit more insight on who he is off-camera.

He Has An Adorable Dog

His name is Eric and he is perfect.

He Can Often Be Found On The Beach

Or at least, that's what Fitzalan's IG suggests.

He's A Photographer In His Spare Time

His Instagram is filled with snapshots of him holding a camera, as well as posts about photography. "Behind the scenes at a Larchmont cafe... I accidentally left my camera there, and they took a bunch of pictures on the film while it took me a week to remember where I left it," he captioned a post with a stream of photos from a random restaurant. "Some of the staff were great at taking pics, others need some practice lol."

He's Very Excited About 'The Society'

Viewers will definitely have mixed feelings about Fitzalan's character, but the skeptical, antagonistic guy with an underlying soft spot is a tale as old as time, and Fitzalan's charm makes him perfect for the part. He'll make Harry the person you love to hate.

Catch him in The Society when it hits Netflix on May 10.

More like this
Twitter Is Pouring Out Some Zhampagne As ‘Schitt’s Creek’ Leaves Netflix
By Brad Witter
Jeffrey Dahmer’s Arresting Officer John Balcerzak Got His Job Back After Being Fired
By Grace Wehniainen
Here’s Where You Can Stream 'Schitt's Creek' After The Comedy Leaves Netflix
By Brad Witter
Watch The Thrilling Teaser Trailer Of 'Shadow And Bone' Season 2
By Gretchen Smail, Jack Irvin and Sophie McEvoy
Get Even More From Bustle — Sign Up For The Newsletter