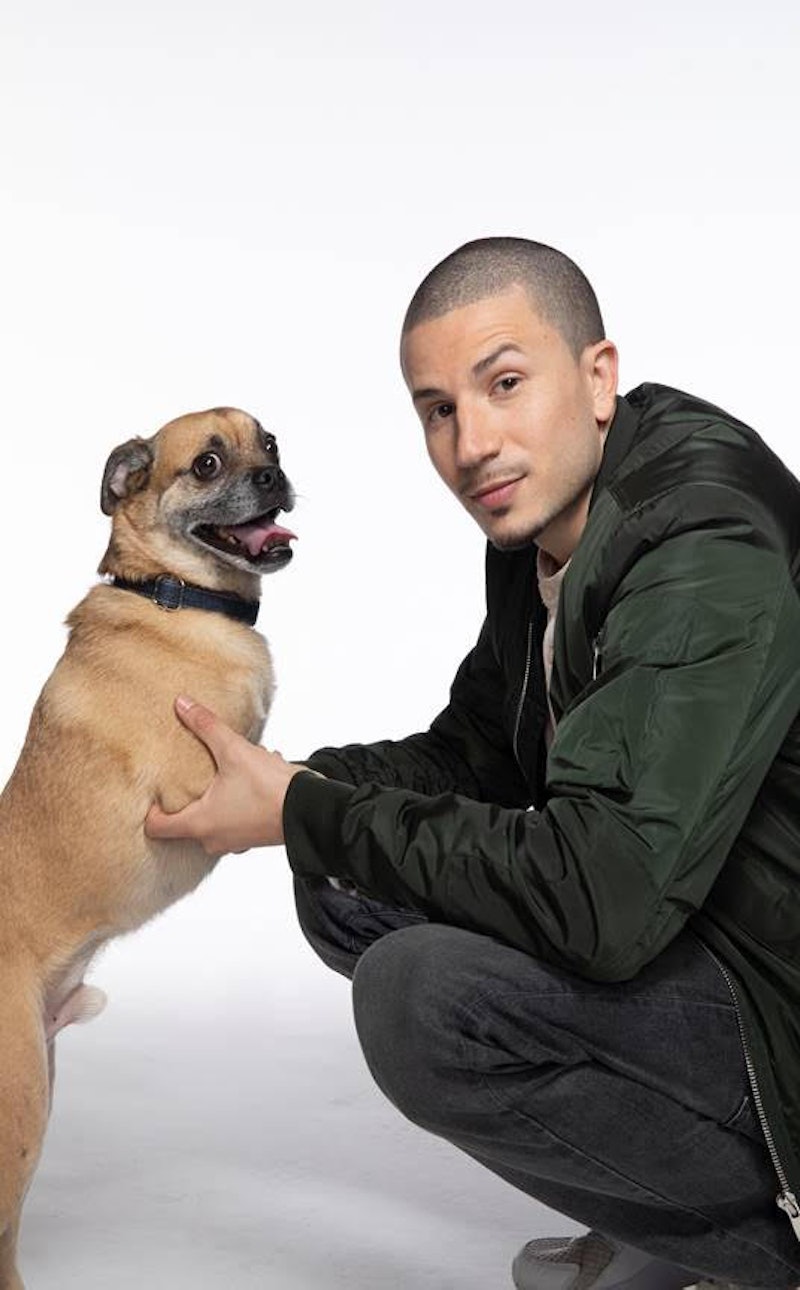 If you love dogs (and let's be honest, who doesn't?), It's Bruno! may be your new favorite show. The Netflix comedy follows Malcolm, played by series creator Solvan "Slick" Naim, and his dog (the titular Bruno) as they venture through New York. And while you'll definitely want to know everything about his furry pal, you might want to get to know Naim, too.

According to It's Bruno's production company, Stage 13, Naim is an Algerian-American writer, director, and rapper from Brooklyn. His debut feature film, 2013's Full Circle, won numerous festival awards, and he's since directed episodes of well-known shows including Animal Kingdom, Power, Snowfall, and The Blacklist.

As for It's Bruno!, Naim's inspiration was simple and endearing. While he was working on another project, his rescue puggle (a pug and beagle mix, for the uninitiated) would sit beside him and make funny faces that made him laugh, so he started filming them. Eventually, that became It's Bruno!, a story full of everyday quirks that only dog owners will understand (i.e. answering the awkward question "Can I pet your dog?").

"I always knew there was something very interesting and charismatic about [my dog Bruno]," Naim told Variety earlier this month. "[He] always has these facial expressions and a demeanor about him that's hilarious. He's just a loving dog and he always wants to show you attention. He's never angry or mad. We can all learn a little something from him."

In an interview with Complex, Naim explained that to him, It's Bruno! is a combination of two shows he loves: Curb Your Enthusiasm and Seinfeld, but"with dogs in the hood."

Because Naim is also a rapper, the It's Bruno! soundtrack naturally features some of his original music. He told Variety that he wrote three new songs for the series, and will release a new album, Proof of Concept, on May 17 — the same day the the show comes out.

Of his array of creative talents, Naim said that rapping comes easiest to him, and that writing and directing take more work and time. "When you're passionate about something, you just work at it," he told Variety. "There's not much downside, you just tend to work it all out. You love what you're doing so you're not really noticing that 23 out of 24 hours a day are spent on that. All those roles, I was always had an affinity for those roles so why not go for them."

According to The Source, It's Bruno! is an eight-part series set in Bushwick, a neighborhood of Brooklyn, and features a cast of rescue animals including Naim's other two dogs. Naim's fellow human stars include Rob Morgan (as seen in Luke Cage, Jessica Jones, and This Is Us) and GLOW's Shakira Barrera.

The show may be silly and unexpected, but that description applies to most enjoyable things in life. So if you're in need of a quick, light-hearted watch, throw It's Bruno! a bone — and don't forget to invite your dog.

More like this
Watch The Thrilling Teaser Trailer Of 'Shadow And Bone' Season 2
By Gretchen Smail and Jack Irvin
Mike Flanagan Teases 'The Midnight Club' In This Exclusive, Creepy Clip
By Grace Wehniainen
Here's What Jeffrey Dahmer's Dad Has Said About His Other Son, David
By Grace Wehniainen
Where Is Lionel Dahmer Today? Jeffrey Dahmer’s Father Reflected On The Serial Killer’s Death In 2020
By Brad Witter
Get Even More From Bustle — Sign Up For The Newsletter