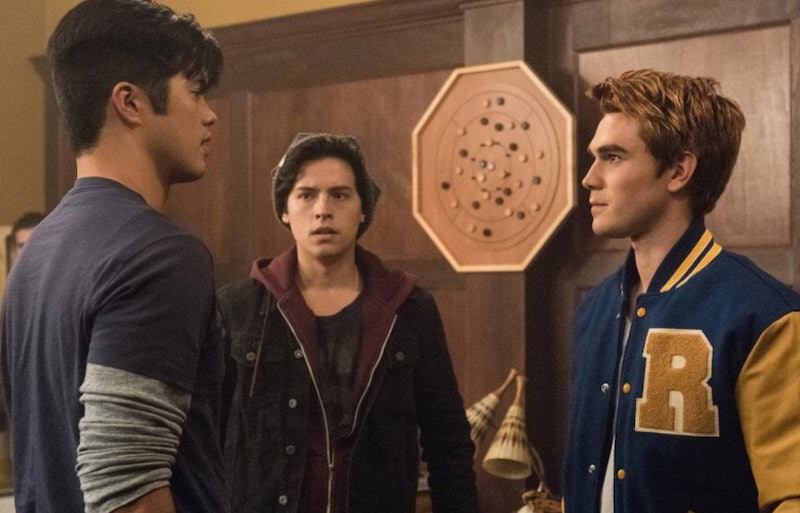 After what felt like an impossibly long hiatus, Riverdale is finally back on Oct. 11. But one of Season 1's stand-out Riverdale High students won't be returning: Ross Butler in the role of Reggie Mantle. His character had to be recast for Season 2, so Charles Melton is playing Reggie on Riverdale now when Season 2 begins and the next town mystery heats back up.

Last year, TVLine reported that The CW announced that they were on the search for a new Reggie going forward, because Butler's career happened to take off at the same time he got the Riverdale gig. Now that 13 Reasons Why Season 2 is happening, it made it impossible for the actor to juggle both projects. (He plays Zach on the hit Netflix series.) Then, shortly after the Season 1 finale aired, TVLine reported that Melton scored the gig, which will allow Reggie to be way more present in the series. He's a beloved character from the Archie comic book universe, so why shouldn't he shine on Riverdale, too?

And even though Butler will be missed, it certainly seems like Melton is the right guy for the job. In fact, even the O.G. Reggie stepped up to congratulate him when the news broke, sharing a video on Twitter about how happy he was to "pass the baton" to him.

Considering his track record, it definitely seems like Melton is well prepared to take on the role. His resumé is relatively short, but it includes roles in shows like American Horror Story: Hotel and Glee. And Riverdale's producers did select him for the role, so why not trust their decision? After all, they did give us the masterpiece that was Season 1 of the comics adaptation.

When he's not working, Melton seems to spend most of his time outdoors and being active — at least, according to his Instagram. Another important piece of information from his social media posts? He seems to have already hit it off with his Riverdale costars. He's already shared cozy BFF pics with KJ Apa, Camila Mendes, and Casey Cott, so if you're not already following him, now is a good time to start.

In fact, so far, it looks like there's a pretty serious bromance going on between Apa and Melton. Here's some proof from a camping trip they recently went on together. So whatever drama may go down between the Riverdale students this year, you can rest assured that they're pals off camera.

Melton also made an emotional Instagram post about scoring the role in May, which he said was "surreal," adding that he "can't express how excited I am to play the iconic Reggie Mantle on Riverdale alongside an amazing cast and crew."

“We love what Ross did with the role of Reggie [this season], but because of his commitments to other projects, we couldn’t use him nearly as much as we would have liked. [Next season], we want more Reggie on our show — he’s Archie’s rival! — and because Ross is unavailable to come back to Riverdale, we’re looking for a new Reggie. Those are big shoes to fill, but we’re confident we can find an actor who is as funny and sexy as Ross. And of course we all wish Ross the best.”

From what we know about Melton so far, it looks like he ticks all of those boxes. Melton's obviously pumped to join the cast, and more Reggie in Season 2 couldn't possibly be a bad thing, right?

Still, a recast is not an insignificant thing. And it'll be interesting to see how this casting change affects the show's second season.