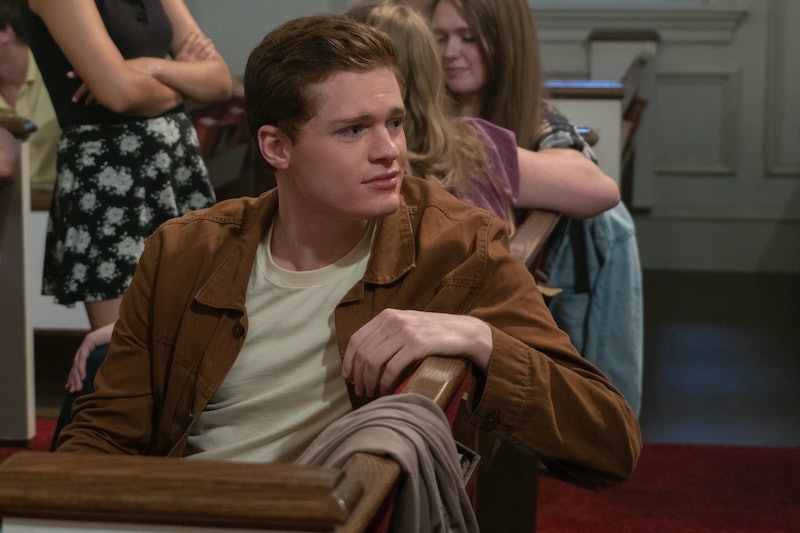 Netflix's new YA drama, The Society, is filled with fresh faces, but if viewers don't already recognize Sean Berdy, who plays Sam, they should get to know him soon. The 25-year-old starred as Emmett on Switched at Birth for all five seasons of the ABC series, and is perhaps one of the most well-known actors who is deaf. Being born deaf, Berdy's character on The Society has already experienced hardships before he and his high school classmates get transported to a strange, adult-less version of their town. But unlike some of his fellow teens, Sam is a character worth rooting for, as he remains a moral center amid the barbaric chaos that soon ensues.

Dealing with teenage cliques is hard enough without having to worry about survival. But that's what the kids in The Society find themselves up against after they return home from a canceled school trip to an abandoned town. Brothers Sam and Campbell are two of these teens, but they have issues even before their dramatic change in circumstances. While Sam is a kind person, his brother Campbell is heartless, and cruel to his brother about his hearing impairment.

As he is deaf himself, Berdy has helped raise awareness of people with hearing impairments. His character on Switched at Birth was the best friend of Daphne, who was also hearing impaired, and they attended Carlton School for the Deaf together. He communicated only through American Sign Language (ASL) and his mother was played by another notable performer who is deaf, Oscar winner Marlee Matlin. Matlin told The Wall Street Journal of Switched at Birth, "It adds a great deal of dimension to the public's perception of what deaf people are like. Because you really understand that there's more than just a deaf person who happens to move their hands ... there's a language, there's a culture, there's relationships between deaf people, deaf people and hearing people, there are obstacles, there is happiness and joy."

Berdy also acted in Drunk History in the "Civil Rights" episode, where he portrayed disability rights activist Frank Bowe. Beyond his performances in projects like The Sandlot 2, Berdy has helped expose more people to ASL in other ways. On his Instagram page, he occasionally interprets the lyrics to popular songs, like John Lennon's "Imagine" and Billy Joel's "We Didn't Start the Fire." This is reminiscent of when he starred in the music video for an ASL version of Enrique Iglesias' "Hero."

As Berdy said in an interview with ClevverTV during a Switched at Birth event, "I'm so proud to pass on American Sign Language. I am born deaf, I was raised deaf, I have a deaf family and everything. But I am fortunate to live in both worlds. So American Sign Language, I believe, is a beautiful language. And I love to deliver that to the viewers and that's really important to me."

With The Society premiering on May 10, Berdy will be able to introduce yet another new audience to ASL as Sam and the rest of his family navigate this new, strange world.