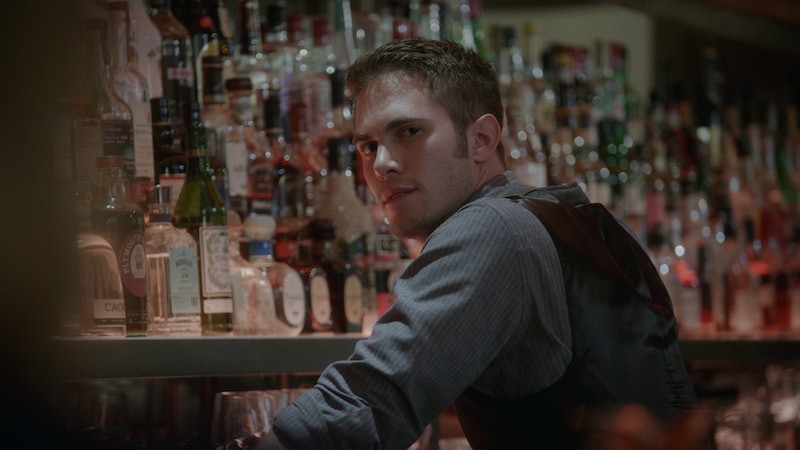 Netflix's new thriller, What/If, not only stars Renée Zellweger, but it also features another exciting actor you might know. Blake Jenner plays Sean in the series, and if he looks familiar, it's because he was in one of the last decade's biggest shows. He played Ryder, one of the high school football players recruited for the the glee club by Finn, on Glee.

Jenner got his Glee role after winning Season 2 of The Glee Project — a reality competition show in which young talents vied for parts in the Fox series. His prize was only supposed to be a seven-episode arc, but he ended up being promoted to a season regular. Since then, he's had parts on Supergirl, Everybody Wants Some!!, American Animals, and The Edge of Seventeen, among others. He also recently wrote and starred in the film Billy Boy alongside his then-wife Melissa Benoist.

But while Jenner has primarily been known for his work in coming-of-age stories (Glee, Everybody Wants Some!!, and The Edge of Seventeen all center on young adults), What/If is quite a departure. According to a Netflix press release, it "focuses on a mysterious woman's lucrative but dubious offer to a cash-strapped pair of San Francisco newlyweds." Basically, Zellweger's character wants a night alone with Jenner's Sean, and will pay him and his wife a hefty fee to make it happen.

As for Jenner — who is not related to those Jenners, by the way — he isn't super active on social media. But when he does post, he's usually hanging out with his adorable nieces, promoting movies he's worked on, and hanging out with very cute dogs.

He hasn't done much press in terms of What/If, but he's always made a name for himself as an ambitious actor with a lot of plans. "I always like to do different things. Every since I've been lucky enough to work, as an actor, I’ve never wanted to just do the same thing, all the time," he said in a 2018 interview with Collider. "I'd love to do something different. There are a couple of things percolating in the air that I'm trying to figure out when to make the move on, but I can't really talk about them right now."

What/If certainly fits the bill of "different," though reviews for the show so far have been... interesting. "The thing is, this show seems to know it's a mess," Kristen Baldwin wrote for Entertainment Weekly. "Soap opera is a genre that rewards excess — from oversized shoulder pads to gargantuan leaps of logic — and [creator Mike] Kelley, along with director Phillip Noyce, presents everything to the viewer with a cheery, exaggerated wink."

If campy, ridiculous melodrama is your shtick (hi), What/If will probably be your next great marathon. It's unclear what kind of future show has on Netflix, as its first 10 episodes are all that have been announced so far, but its sinister plotline could keep things interesting for some time to come — and keep Jenner on our screens.

More like this
Watch The Thrilling Teaser Trailer Of 'Shadow And Bone' Season 2
By Gretchen Smail and Jack Irvin
Here’s Where You Can Stream 'Schitt's Creek' After The Comedy Leaves Netflix
By Brad Witter
Jeffrey Dahmer’s Arresting Officer John Balcerzak Got His Job Back After Being Fired
By Grace Wehniainen
If 'Entergalactic' Season 2 Happens, You Could Get A New Kid Cudi Album
By Kadin Burnett
Get Even More From Bustle — Sign Up For The Newsletter