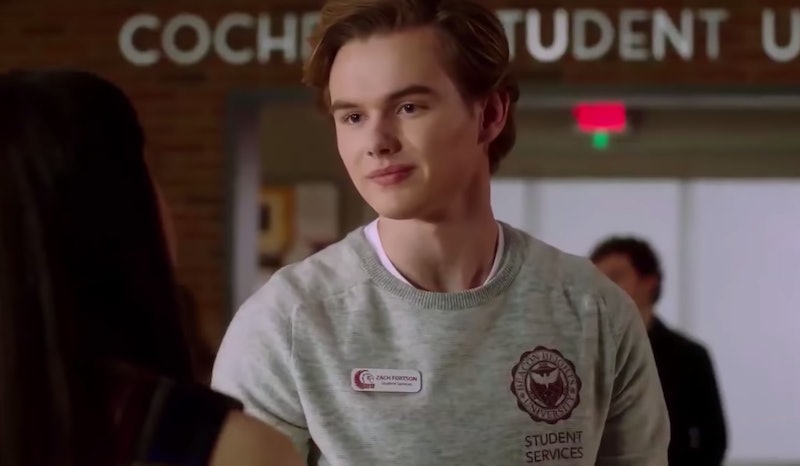 TV loves a romance that starts with one or both of the two people disliking each other. That's why fans can smell a Zach and Ava pairing on The Perfectionists from a mile away. The two may have been forced to work on a group project together, but they came away from the assignment on much better terms. If Ava does strike up a flirtation with him, Garrett Wareing, who plays Zach on The Perfectionists, could end up sticking around for a while.

Ava first met Zach while putting together her fashion show. Zach was running operations backstage and he could not have acted more disdainfully towards Ava. Eventually he explained why — Zach's parents put their life savings into Ava's father's business. When it folded, they lost everything. Ava apologized on behalf of her father, which was nice of her to do since it's not her fault her dad broke the law. But it still took Zach a while to warm up to her. When they initially got paired together on an art history project, he was frustrated that they had to team up. But they were able to come to a solution about the project together, and, by the end of the episode, Zach had really come around to Ava.

Prior to now, Ava's been mourning her boyfriend Nolan, but it's OK if she's ready to move on with a new romance. Zach seems like a great guy, even if they did get off on the wrong foot. He's not mentioned in any of the upcoming episode synopses, but that could just be because he's not really tied to the main mystery. He's more of a side character and a bit of a refreshing break for all the struggles and heartbreak and drama Ava endures elsewhere in the show. He is, however, listed on IMDB as being in final two Season 1 episodes, so we'll be seeing him at least.

Perhaps his role will get bigger in the final episodes, since Wareing hinted in a pre-season interview with Brad Everett Young that his character "may or may not get into some mischief." Wareing also revealed that his character is a sophomore at BHU and works three jobs to stay there. He described Zach as "resilient, smart, and artistic."

Deadline reported that Zach also "manages to maintain stellar grades" despite his giant workload, and he has a "tough exterior [that] hides a sensitive soul who can make anyone melt."

Fans are already melting over #Zava, Ava and Zach's couple name. Wareing has been tweeting up a storm about the couple using that hashtag, and it seems that many viewers are excited for the pair's potential

"ZAVA is adorable! my heart," one fan replied to the above tweet. "I already ship it! Can’t wait to see more," wrote another.

If Zach looks familiar to you on the show, you may have seen the actor in some of his other roles. He starred in the 2018 thriller Perfect and also appeared in Independence Day: Resurgence. But this character of Zach seems poised to put Wareing on the map in the young adult mystery/thriller genre that The Perfectionists fits so well in. Is it too soon to say #ZavaForever?