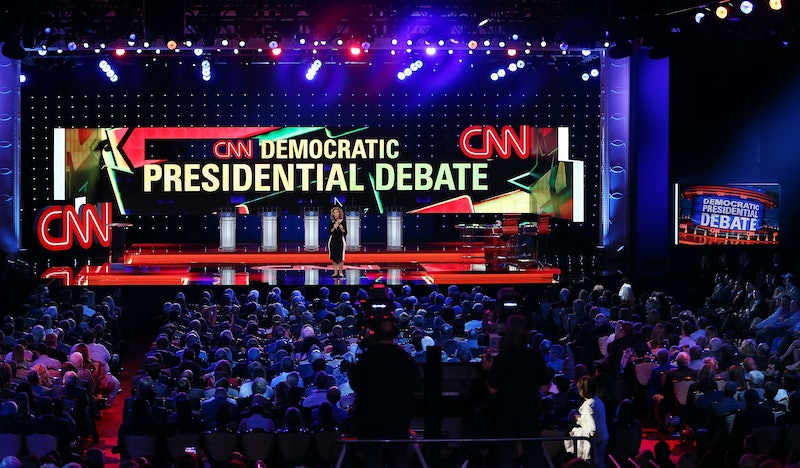 Presidential debate season is nearly here, and a lot of people are vying for the Democratic candidacy. If they're able, presidential hopefuls will make the case for their campaigns at a series of debates scheduled to take place this summer. Who will be in the 2020 Democratic debates depends on several factors, and the list is starting to shape up.

On Monday, The New York Times reported that while many Democratic hopefuls had already qualified to participate in the official debates scheduled this summer, a handful had not. As of the end of April, those who have qualified include: Bernie Sanders, Pete Puttigieg, Kamala Harris, Elizabeth Warren, Joe Biden, Amy Klobuchar, Beto O'Rourke, Andrew Yang, Cory Booker, Julián Castro, Kirsten Gillibrand, John Hickenlooper, John Delaney, Jay Inslee, Tim Ryan, and Tulsi Gabbard. Eric Swalwell, Wayne Messam, Marianne Williamson, and Seth Moulton have not yet qualified, per the Times.

There are several ways that a candidate can qualify to participate in a debate. In a statement released last February, the Democratic party said that presidential hopefuls may participate if they meet certain criteria related to polling, grassroots funding, or, possibly both.

"Because campaigns are won on the strength of their grassroots, we also updated the threshold, giving all types of candidates the opportunity to reach the debate stage and giving small-dollar donors a bigger voice in the primary than ever before," said Tom Perez, the Democratic National Committee chair, in a statement.

The requirements that the Democratic party set are fairly straightforward. When it comes to polling, in order to qualify to participate in the debates, candidates must have at least 1 percent of support in three or more polls. Those polls may either be national or include Iowa, New Hampshire, South Carolina, and/or Nevada.

If more than 20 different candidates qualify to be in the debate, the Democratic party said in its statement that it will winnow down the docket by giving priority to those individuals who meet both requirements. From there, preference will be given to candidates with the highest poll numbers, followed by candidates with the greatest number of unique donors.

As for the debates, two rounds have officially been announced. The first Democratic debate will take place in Miami, on June 26 and June 27, per NBC News. NBC News is hosting that debate alongside MSNBC and Telemundo.

The second round of Democratic debates will take place in Detroit, on July 30 and 31, the party tweeted out earlier in April. CNN is hosting that round, per the Democratic Twitter account.

Debates offer many candidates the opportunity to sell their candidacies to the American people. Although the list is still being firmed up, the Democratic debates will almost certainly offer an important glimpse into the future of the 2020 presidential race.