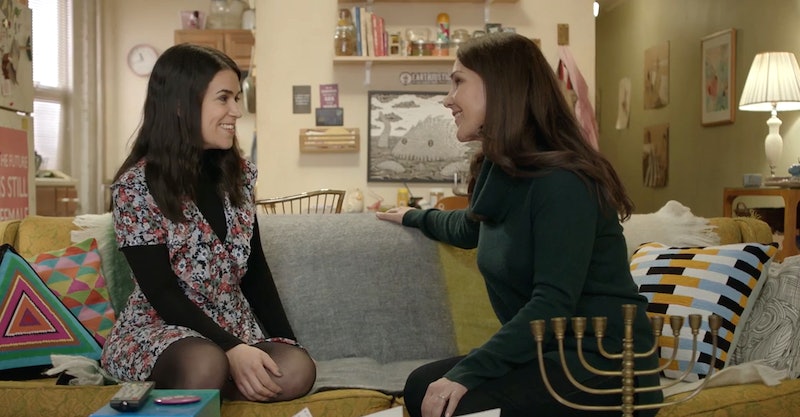 Broad City introduced Abbi's dad, portrayed by Tony Danza, in Season 3, but her mom remained an enigma until the appropriately-titled Season 4 episode, "Abbi's Mom." Played by Peri Gilpin, best known for being Roz on Frasier, Abbi's mom on Broad City wants to let loose with her daughter after she found a benign lump in her breast. This is in stark contrast to the Joanne that Abbi has grown up knowing since Abbi notes to Ilana how conservative her mom is. Yet, after the breast cancer scare, Joanne wants her daughter to help her have a less-inhibited life during a "naughty girls' night out" — all while wearing Abbi's signature blue dress that she bought back in Season 1. And Joanne's visit teaches Abbi the valuable lesson that parents are people too.

Despite these dark confessions, you may think this shift in Joanne's personality would be exciting for Abbi since her best friend is Ilana. But it actually upsets Abbi. She admits to Ilana that she can't handle her mom's new level of honesty and wonders if this is what it's like to be an adult since the line between mother and daughter has become significantly blurred. Because even though Abbi can now look at her mom as more of a friend, that still doesn't mean she wants to reveal the number of sex partners she has had. By the way, that number is 32 and it's a number that Joanne eventually has a marijuana-induced freakout over while dining at Sushi Mambeux. But the table-standing freakout, which results in Joanne falling into the pond at the restaurant, is not because Joanne is slut-shaming her daughter. It seems to be more about how her daughter's confession makes her realize how many sexual experiences she has missed in her own life.

While most adult children notoriously range from disinterested in to disgusted by their parents' sex lives, Joanne forces Abbi to see her mom as a woman with sexual desires. And what Joanne is going through isn't rare for people in her age group. In 2014, TODAY conducted a "This Is 50" survey of people 45-69 to give insight into the sex lives of people in their 50s. The survey found that close to one-quarter of people in their 50s don't have sex at all. Yet, that doesn't mean that people in that age group don't want to be having sex — on the contrary, TODAY wrote that "more than half of men and women ages 50 to 59 who were surveyed wished they were having more sex." More sex is clearly something Joanne wishes for and her storyline also helps to disprove the myth that women's sex drives decrease as they get older.

Season 4 of Broad City has an element of growing up that was lacking in previous seasons and "Abbi's Mom" is a continuation of that. As Joanne has regrets about her life — particularly regrets about her sex life — Abbi steps up to be supportive of her mom, even when it makes it Abbi uncomfortable. And, going along with the theme of Season 4, it's a sign of advancement that rather than Abbi quash her mom's dreams of a more liberal lifestyle, she accepts and embraces this new side to her mom. Because if 20-something women like Ilana and Abbi can embrace their sexuality, why can't Abbi's mom?

More like this
Kaley Cuoco Was Set Up With Her New Boyfriend Tom Pelphrey By Her Manager
By Hugh McIntyre and Jake Viswanath
'House of The Dragon' Episode 6 Will Take Place A Decade After Episode 5
By Kadin Burnett
The ‘Emily In Paris’ Season 3 Release Date Is Here, Plus The First Footage
By Bustle Staff
The ‘You’ Season 4 First Look Shows Joe’s New Identity And Potential Victims
By Bustle Editors
Get Even More From Bustle — Sign Up For The Newsletter