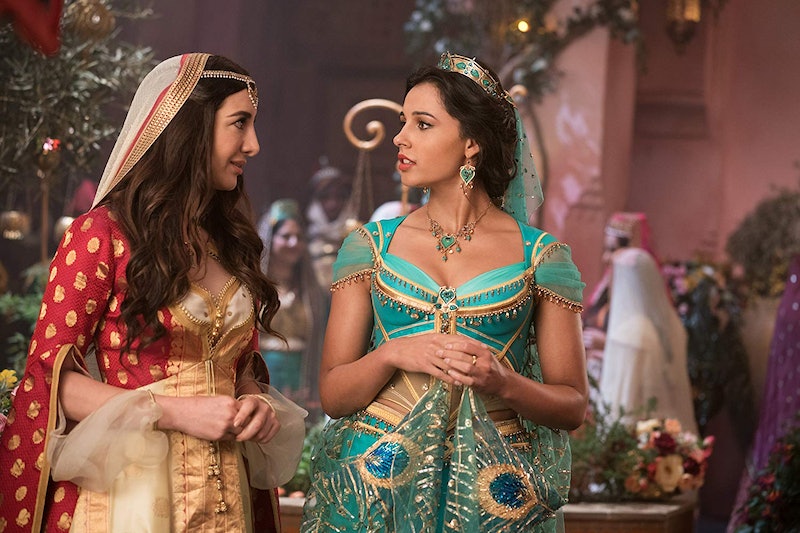 The new Aladdin is hitting theaters on May 24, and judging by what we've seen so far, it's a fairly loyal interpretation of the original. The best parts of the Agrabah we know from the 1992 animated original are all going to be there: the same classic songs, colorful dance numbers, a (sometimes) blue Genie (Will Smith), and even Iago, Rajah, and Abu. But there are also some additions to the original story. In the trailer, you probably noticed a friendly face standing by Princess Jasmine in practically every scene in the palace. Nasim Pedrad's Aladdin character Dalia is one of the changes made to the original story, filling in an unfortunate gap.

The main action still revolves around Aladdin (Mena Massoud), a kindhearted orphan tries to survive day-to-day life in the streets of Agrabah. He falls in love at first sight when he meets Princess Jasmine (Naomi Scott) in the public market. He's then hired by power-hungry royal adviser Jafar (Marwan Kenzari), who promises him riches enough to impress a princess in exchange of fetching the lamp from the mysterious Cave of Wonders. Of course, everything goes haywire, and Aladdin winds up getting the three wishes and a genie best friend, which he wants to use to win over the love of his life.

In Entertainment Weekly's release of exclusive photos from the film, Pedrad's Dalia is described as being the princess's best friend — aside from her pet tiger Rajah — loyal handmaiden, and only reliable confidante within the palace walls.

Previously, it was speculated by Elite Daily that Dalia might be a stand-in for Rajah as Jasmine's best friend. But instead, we're getting a CGI tiger and a best human gal pal. So why is Dalia there? Well, her role is important not only because she's the best friend who can actually give Jasmine sensible verbal responses and advice. She's another female speaking role in an otherwise male-dominated movie.

"I never realized it, but in the animation, Jasmine is really the only female character — isn’t that crazy?” Scott said in an interview with The Hollywood Reporter. "We wanted people to watch the movie and see Jasmine’s relationship with another woman, and be like, ‘Ah, that’s what I’m like with my girlfriend,’ or ‘We would so do that if I was in that position.’ That’s something that’s missing from the animation."

Pedrad is known for her work in comedy, including a stint on Saturday Night Live from 2009 to 2014. She's also appeared in sitcoms like New Girl, Brooklyn Nine-Nine, and The Mindy Project. So you can probably expect her character to bring some of the comic relief. In the TV spot below, she's giving Jasmine a little bit of goodnatured grief about her outlook on her problems, and that's the kind of sarcastic sensibility that the determined aspiring-sultan will need to keep her grounded.

This version of Aladdin isn't a shot-for-shot remake of the movie you grew up watching, but in this way, it might just be a change for the better. Dalia's adding another much-needed female perspective to the movie, and we're definitely looking forward to seeing how she and Jasmine bring some Bechdelian balance to the love story.