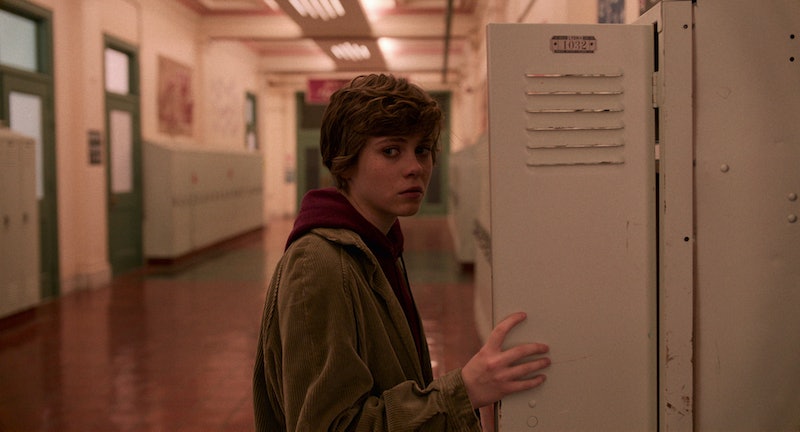 Spoilers ahead for I Am Not Okay With This Season 1. Netflix's I Am Not Okay with This takes significant liberties with the graphic novel it's based on, primarily with the antagonist, a shadowy figure who's following Syd. In the comics, the shadow is a manifestation of Syd's feelings, but in the show, the shadow turns out to be an actual person.

In the final moments of the last episode, Syd runs up a watch tower to contemplate how alone she feels, when the shadow figure suddenly appears in front of her. That's when we discover the shadow is in fact a man and not just a hallucination, as an earlier scene in the library implied.

"Who are you. Should I be afraid?" Syd asks.

"They should be afraid," the male figure in a trench coat says. "Let's begin."

It's unclear who this man is, but it's probably a safe guess that he's military, or at least someone who knew of Syd's father's abilities — and hers too, by extension. Considering we didn't see Syd's father's face and we don't know the particulars about his death in the show, there's a possibility that it's actually him in disguise. But the figure is likely more of a guide.

Regardless, this helps I Am Not Okay with This to sidestep the comics' tragic ending. In the original story, Syd is juggling significantly more than she is in the show: she murders Brad midway through rather than at the prom, and it's heavily implied that her father asked her to kill him using her powers (and that she obliged). Syd is also estranged from Dina, so she hooks up with Stanley and then a convenience store owner named Ryan. But worst of all, she's plagued by a terrifying black specter that she describes as the embodiment of her "hatred, anxiety, and anger." It nearly kills Ryan when she's going down on Syd, which causes Syd to run away, deciding it's best she keep to herself. Ultimately, this monster succeeds in isolating Syd from everyone around her, and she uses her powers to die by suicide.

On one level, this portrayal of Syd's emotions is an accurate allegory for depression. In the same way The Babadook movie was about overwhelming grief personified, so too is I Am Not Okay with This about how depression can easily become an all-consuming dark specter that unfortunately not everyone is able to successfully combat.

But on another level, this premise is a really tough sell for a TV series, and particularly one aimed at teens. It's hard to imagine Netflix ever marketing I Am Not Okay with This with that original ending, considering all the flak they rightfully got for the suicide scene in 13 Reasons Why.

This is why it's so notable that the I Am Not Okay With This adaptation changes the ending, with the Season 1 cliffhanger hinging on Syd exploding Brad's head at prom rather than her own. Whereas the comic book ending was completely heartbreaking and upsetting, the show adaptation opens the door for a very different Season 2 — one where Syd actually learns to control her powers and keep those negative feelings at bay.