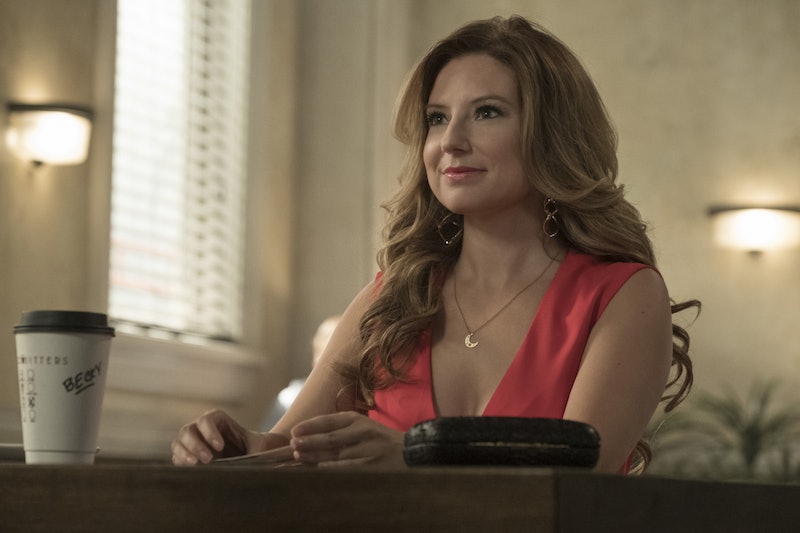 The Flash has had to deal with a lot of challenges: aliens, super villains, and everyday stresses, included. But when Season 4 continues on Oct. 23 he’ll have to deal with something a bit more abstract: luck. Hazard on The Flash has superpowers that revolve around luck. If you're not familiar with the comics, here's a little bit of backstory on this charmed meta to bring you up to speed.

In the comics, Hazard is a villain inspired to avenge her grandfather the Gambler, who committed suicide after losing all his money gambling. Being a metahuman, she has extraordinary powers — basically super good luck. Able to manipulate luck-based situations with her psionic powers and dice, she's able to get revenge on the casino responsible for bankrupting her grandfather by bankrupting them — winning over and over again at the various games. So while other villains have powers that can be fatal to the scarlet speedster, Hazard’s are a little less intimidating. More annoying.

Played by Sugar-Lyn Beard on the show, Hazard (aka Rebecca Sharpe) has powers that evoke a lighter tone than the serious speedsters (namely Reverse Flash and Savitar) the Flash has been facing these past few seasons. That seems to be intentional, according to Variety, executive producer Tod Helbing hinted at a shift in tone this season compared to the last few. “We’re also trying to lighten the tone this year,” Helbing said. “Last year was pretty dark, we’re going to try to get back to the jokes.”

It seems that The Flash will take a lot of inspiration on Hazard’s character from the comics. While we don’t know if her backstory will be the same, we do know that in the TV series she’ll have her luck-based superpowers like from the comics. According to the official synopsis for episode 3, titled “Luck Be a Lady,” Hazard's powers should provide the comic relief. It says:

"Barry (Grant Gustin) and the team are hit by a string of bad luck and realize it is the handiwork of a new meta, Becky (guest star Sugar-Lyn Beard) nicknamed Hazard, who has the ability to give others bad luck, while cashing in the benefits for herself."

It’s safe to assume Hazard will be a lot like the comic book character; she looks to be wearing her classic outfit from DC lore. According to Hollywood North, when The Flash was filming the episode in Vancouver, photos snapped revealed Hazard in costume. And it's strikingly similar to her costume in the comic books. (Possible spoilers.) The outlet reported a flash of light when Becky boarded a bus, and speculated that perhaps this flash was from the particle accelerator and her character was struck by dark matter. Maybe that’s what gave her superpowers.

She's a member of the Injustice Society in the comics and and has worked with them on a number of different schemes. But it would seem that on The Flash she is working alone. After all, there’s no mention of her working with anyone in the synopsis, and in the photos and video from the filming on set, it doesn’t seem as though she has any accomplices.

Beard is just one of a number of new actors appearing on The Flash this season. She joins not only the existing stars, but according to Movie Pilot, also four other cast members. They will include: Katee Sackoff as Blacksmith, Hartley Sawyer as Elongated Man, Danny Trejo as Breacher, and Neil Sandilands as the Thinker, this season’s big bad. Whether Hazard will appear more than just one episode remains to be seen, but her luck may run out by the end of this one.