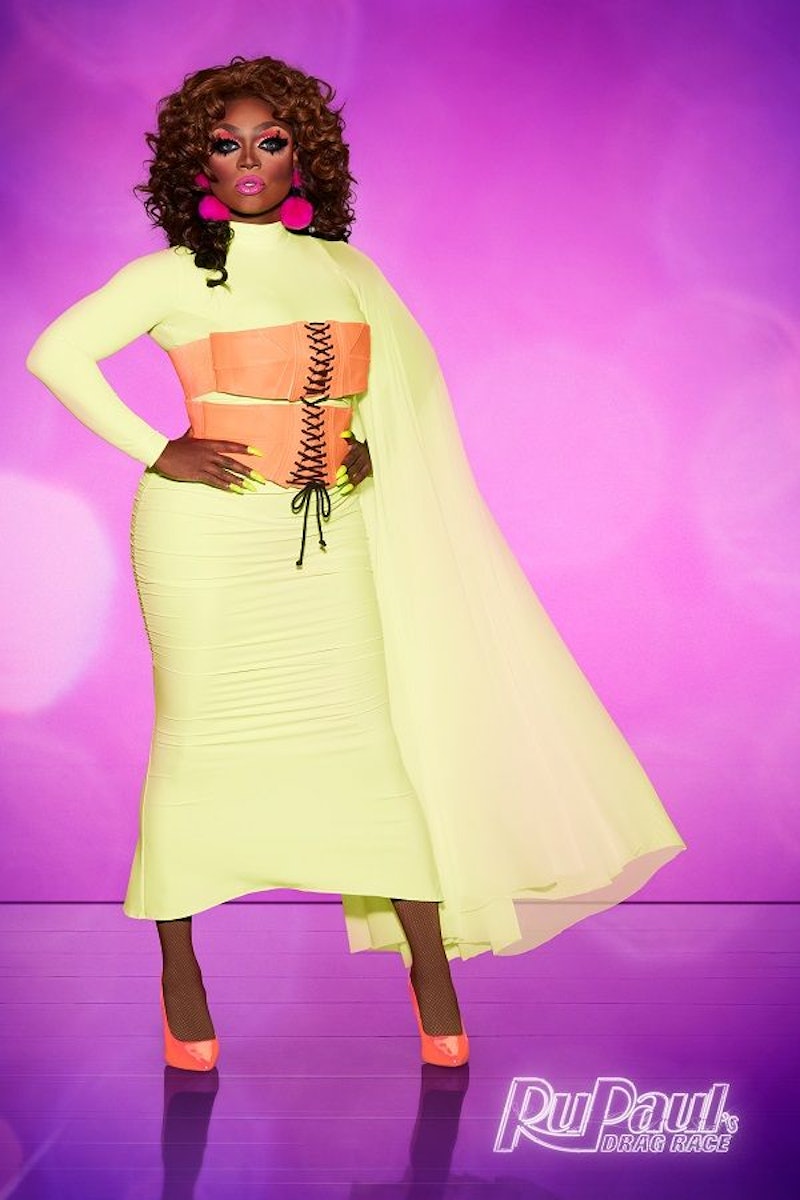 RuPaul’s Drag Race All Stars 3 is over, but Drag Race Season 10 is just beginning, and one queen may already be in the All Stars category based on her drag family alone. Mayhem Miller's drag family is seriously established. In fact, her family relationships may just give her a bit of an edge in this season of the competition.

Before getting into her drag family though, here's what you need to know about who Mayhem is as a drag queen in her own right. In an interview with VH1, she revealed the origin of her name. “I got my name ‘Mayhem’ from watching Tommy Lee and Pamela Anderson’s [sex tape] video and Tommy has ‘Mayhem’ [tattooed] above his lower regions,” she said. “Mayhem is fun, fierce, and fantastic. She is that girl that walks into the club and everyone is like, ‘finally, the party is here.’”

Mayhem is a 36-year-old queen from Riverside, California who thinks that her history of doing drag is what will set her apart in the competition. In that same interview with VH1, she said she auditioned to be on the show because she wants to show she’s a force to be reckoned with. “I need to be here so I can show everyone else what I got. I would say my edge in the competition is my experience,” she said. “Drag Race ... is seriously the Olympics of our profession and I think I am the most fiercest b*tch around. So why not [compete]? … It’s my life. I’ve been doing this for so long and I don’t have any thoughts in my head to say it needs to stop anytime soon. I’m going to keep going until I just can’t go no more.”

Of course, she didn’t formulate that drag identity in a vacuum. Blood is not always thicker than water, especially in drag, where deep friendships turn into drag family. As TV Line notes, she has quite the extended drag family, all of whom have appeared on the show before — some even more than once on Drag Race or Drag Race All Stars. Her drag sisters include: Detox (Season 5 and All Stars 2), Delta (Season 3), Raven (Season 2 and All Stars), and Morgan McMichaels (Season 2 and All Stars 3).

Although none of those four won the seasons they appeared on, both Detox and Raven finished runner-up in their respective All Stars appearances. Moreover, both Raven and Delta have become very close with RuPaul since their appearances. Mic reported that Delta styles Ru’s wigs while Raven handles makeup for Ru. All of those details point to Mayhem having the cards stacked in her favor to really slay the competition.

But what’s a drag family without a drag daughter? Luckily, for Mayhem, she is also a drag mother. Back in 2014, she helped one of Buzzfeed’s Try Guys Eugene Lee Yang formulate his own drag identity. After some prepping shown in a video on YouTube, Mayhem revealed Cheyenne Pepper (aka Yang) to the world.

As the saying goes, "You don’t choose your family" — however, for drag, it’s a bit different. You do choose your family to some degree. Clearly, there are many queens in the Drag Race family that cannot help root for Mayhem to be crowned queen in Season 10 — she's practically one of their own.

Mayhem said in that VH1 interview that her style was, “Dynasty.” Clearly, she is part of one of the most influential dynasties of drag queens the show has seen. There is no doubt that family support will help push her to success throughout this competition and beyond.

More like this
Rachel Fuda Gave Birth Just Weeks Before 'RHONJ' Season 13
By Brad Witter
Danielle Cabral From 'RHONJ' Is No Stranger To Reality TV
By Brad Witter
David Schwimmer & Gemma Collins Join 'Celeb Bake Off' & Twitter Can't Cope
By Sam Ramsden
Erika Jayne's Estranged Husband Tom Girardi Has Been Indicted On Fraud Charges
By Jake Viswanath
Get Even More From Bustle — Sign Up For The Newsletter
From hair trends to relationship advice, our daily newsletter has everything you need to sound like a person who’s on TikTok, even if you aren’t.