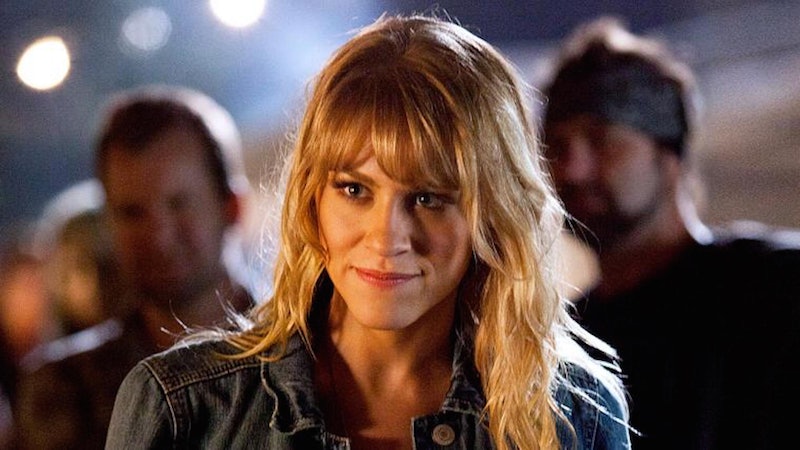 The second season of the CW's Riverdale has quickly taken a turn for the darker. And Jughead Jones has found himself mixing with some rough characters, thanks to FP's association with the Serpents. Penny Peabody on Riverdale could be a part of Jughead's exploration of this new identity, but how is she going to get involved in the town's drama?

According to Deadline, Penny Peabody, aka the "Snake Charmer," is an an attorney that the Southside Serpents keep on hand, just in case they have any run-ins with the cops. You can imagine how much the gang must break the law in order to need someone like Penny, played by CW alum Brit Morgan, on payroll. Not much is public yet about her character arc or what she'll be slithering into in Riverdale. All that fans know is that she'll be working closely with Jughead, most likely on his own father's case.

The relationship between Jughead and his father FP Jones is strained due to FP's alcoholism. In Season 1 Jughead moved out on his own and his family quickly fell apart. Although, Jughead still hasn't lost hope for his father getting his act together. FP quit drinking in hopes of reuniting his family. However his plans were shot when FP was framed for the murder of Jason Blossom. He was later proven innocent, but still deemed an accomplice. Therefore FP was charged with withholding evidence and is facing some serious prison time. One of Season 2's main storylines revolves around Jughead trying to help set his dad free and that's where Penny comes in.

At first glance she seems to be an upstanding officer of the law, but as fans will quickly learn, there's more to Penny Peabody than what meets the eye. She prefers to take "favors" as payment for her service, instead of cash. Jughead has been welcomed into the Serpents — his father's old crew — and will be hanging around them more in Season 2 after going to live in foster care and transferring schools.

Clearly Jughead's going through a tough time, which makes him extremely vulnerable and easy for someone like Penny to take advantage of. Considering the kinds of things the teenagers have been doing on Riverdale lately there's no telling what kind of "favor" Penny will be expecting in exchange for helping FP, but we're guessing it'll be well in line with the darker tone of Season 2. But on the flip side, as one Reddit user pointed out, Penny's presence might add a more authentic layer to Jughead's upcoming antics. "This is a good way to get Jughead involved with the gang and the illegal stuff without making it feel out of character or forced. It seems he is going to do anything to get his dad out of prison," Reddit user oliviacody wrote. Once you're in with the Serpents, it seems as though it's even harder to get out.

Playing characters with questionable and quite frankly, evil motives seems to be something that Morgan does well. And from the sound of it her character Penny will fit right in with the rest of the Riverdale group. Aside from playing the villain Livewire on fellow CW series Supergirl, Morgan is known for playing werewolf Debbie Pelt on True Blood.

Penny makes her way to Riverdale along with other new characters including the Black Hood, Vanessa's shady businessman father Hiram Lodge, and Toni Topaz, Jughead's new friend at Southside. Fans will just have to wait and see what exactly Penny's up to, but we've got a feeling that things are about to get even worse for Jughead with her by his side.