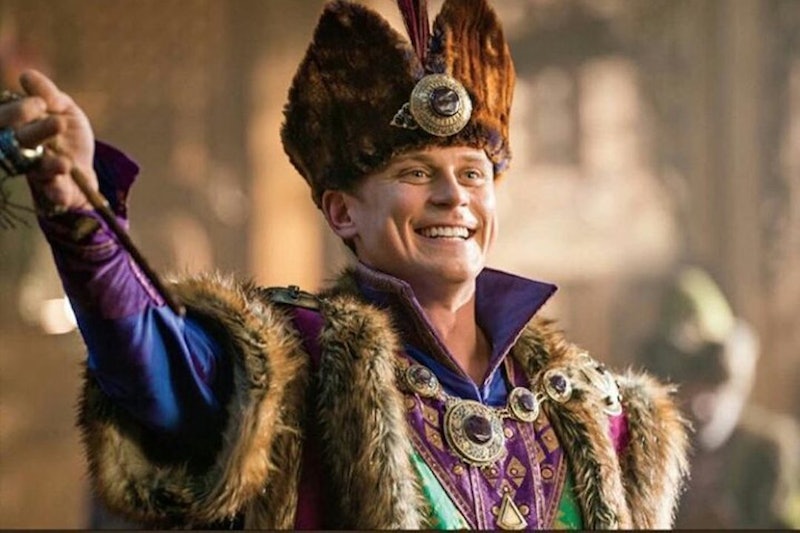 Judging by Twitter alone, there are a lot of mixed feelings regarding Disney's live-action/CGI remake of its 1992 classic animated film, Aladdin. Perhaps the most controversial addition to the movie, which hits theaters on May 24, is Billy Magnussen's Aladdin character, Prince Anders — the only white character in this Middle Eastern narrative, as far as we know. Anders isn't a character in the original Aladdin, so it's not difficult to see why his presence is raising some eyebrows.

Aladdin (Mena Massoud) is still the same clever and kind "street rat," who falls in love with Princess Jasmine (Naomi Scott) after helping her out of trouble at the public market market. The villain is still power-hungry palace adviser Jafar (Marwan Kenzari), and Aladdin is still assisted by Genie (Will Smith), who becomes his BFF.

So where does Prince Anders would fit in? According Vanity Fair, Disney says that Anders is "a suitor from Skanland and potential husband for Princess Jasmine." Which totally makes sense, if you remember a certain minor character from the original movie by the name of Prince Achmed.

Voiced by Corey Burton, Prince Achmed is the latest in Jasmine's long line of suitors who comes along to seek her hand just a little bit ahead of Prince Ali, a.k.a. Aladdin. His stint in the film is quite short; he's snobbish, uptight, selfish, and heartless. Jasmine herself describes him as "overdressed and self-absorbed."

Anders may very well be a stand-in for Achmed. Although not much has been revealed regarding his character, it's clear that Anders is wealthy and — as evidenced by his wardrobe — doesn't shy away from all things bold and grand. Whether Aladdin's rival will also have a terrible personality is yet to be determined, but with Magnussen's track record of playing "douchebags you love to hate," as Buzzfeed puts it, it's a safe bet.

Still, some people on Twitter are calling this casting unnecessary, when Disney could have cast a Middle Eastern actor in the same role. One user even refers to Anders's presence in the film as "the gentrification of Agrabah." Bustle reached out to Walt Disney Studios when the casting was announced, but did not receive a response.

When asked about Magnussen and accusations that extras wore makeup to look Middle Eastern, Navid Negahban, who plays the sultan in the new Aladdin, told HuffPost in an interview, "It’s not whitewashing." (Disney released a statement to BBC regarding the extras, which reads, "Diversity of our cast and background performers was a requirement and only in a handful of instances when it was a matter of specialty skills, safety and control [special effects rigs, stunt performers and handling of animals)] were crew made up to blend in.") Negahban continued, "The thing is that the garden should be filled with flowers of different kinds. If not, the garden is going to be very boring. So you’re gonna go and see this beautiful garden with colorful flowers, and I just hope that you enjoy the journey."

Only time will tell how the conversation changes when Aladdin comes to theaters.

More like this
20 Photos Of The 'Hocus Pocus' Cast Then & Now
By Radhika Menon
12 ’90s Movie References You Missed In 'Do Revenge'
By Radhika Menon
Margot Robbie Breaks Her Silence On *That* Viral 'Barbie' Moment
By Maxine Harrison
24 Years Ago, 'Friends' Dropped Its Most Underrated Ross & Rachel Episode
By Grace Wehniainen
Get Even More From Bustle — Sign Up For The Newsletter