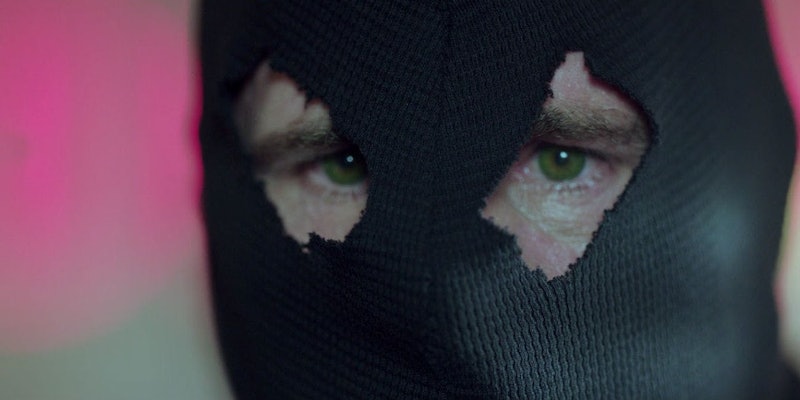 In Season 2, fans, along with Archie and the gang, are looking are leaving no stone unturned on their quest to find out who exactly shot Fred Andrews on Riverdale and why. The masked assailant set Archie down a path of vengeance and (spoilers ahead) at the end of the season premiere strangled Ms. Grundy to death. Who is the Black Hood, and why is he killing people who are or have been close to Archie? The answers to the murderer's identity and what his purpose is on the show could rest within the pages of the beloved comic book series.

The Black Hood first appeared in the Archie Comics universe in 1940. Per the Archie comics wiki, the Black Hood started as "a costumed man of mystery who had been trained by a hermit to combat evil." The original comic is vague about whether the Black Hood possesses magical superpowers, or just simply has the unusual strength that other street-fighting superheroes like Batman seemed to possess naturally. The comics wiki states that he was an ex-cop named Matthew Kipling "Kip" Burland. Though originally framed for grand larceny, he later cleared his name. He still wore his costume and fought crime throughout the city, until he passed the "hood" along to his nephew.

Per The Wrap, in 2015, Dark Circle Comics took the non-Archie characters to create a story and made the Black Hood Greg Hettinger, a cop who got a bullet to the face after being in a gun fight. He shot back once before losing consciousness and woke up to learn that he shot and killed the second Black Hood (Kip's nephew). After that, Greg developed a painkiller addiction due to the trauma of his own injury and what he did to the other Black Hood. His own life in shambles, Greg took over the identity of the Black Hood complete with the mask — thanks to a coworker giving it to him as a joke.

In “Chapter Fourteen: A Kiss Before Dying,” the Season 2 premiere, Archie’s father Fred was rushed to the hospital after being shot by an anonymous man in what Archie described as a "black hood." At the end of the episode, music teacher Ms. Grundy — who had a very inappropriate and harmful relationship with underage Archie in Season 1 — was making troubling advances to yet another one of her underage students during a piano lesson. After she said goodbye and went back into her home she noticed that a few music sheets had blown around. The window was open and obviously something was off. But by the time she realized that her house had been broken into, it was too late.

The Black Hood was behind Ms. Grundy and choked her to death right as the credits rolled. You don’t see much of the masked murderer, just the fact he's white, has green eyes and a few grey hairs here and there, which indicates that he could be middle-aged.

While definitely dangerous, The Black Hood's comic book history suggests that he may have good intentions in Riverdale after all. Case in point: a cop and vigilante who's keen on seeking justice killing Ms. Grundy, a known child predator, could indicate some twisted form of morality. But, that still doesn’t explain why the Black Hood would go after Fred, who's considered an upstanding man and father in the community. Although, how well do you really know someone in this town?

Maybe Fred is involved with the infamous Lodges, known for their corrupt business practices. Or maybe he's connected to the Southside Serpents along with friend FP. Additionally, in Season 1, Fred admitted that he was arrested for a DUI incident. Could the Black Hood be connected to this arrest somehow? As with most things on Riverdale, fans can never be too sure. Although one thing is clear: the Black Hood isn't just murdering (and attempting to murder) folks for fun. He's on a mission.