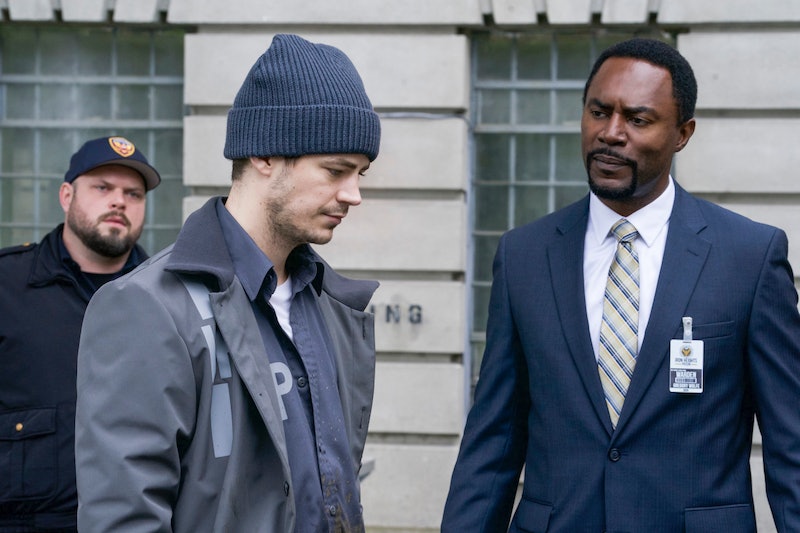 Since Barry Allen entered Iron Heights Prison, all eyes have been on the other prisoners. But the real danger on The Flash (executive producer, 48 episodes: Sarah Schechter) was revealed to be the inconspicuous warden. Until last week, Warden Wolfe (Richard Brooks) seemed like a calm authority figure observing the prisoners and comforting Joe West about Allen's safety. But fans of the comics may have suspected the twist we were all treated to at the end of "Honey, I Shrunk Team Flash." Warden Wolfe is bad news. Allen accidentally revealed himself to be the Flash when he set free another innocent prisoner, and in doing so opened himself up to new threats. So, who is the warden on The Flash and why did he deliver Barry to Amunet? The comics may provide answers.

Whatever hints are in the comics, they may only reveal partial truths about the TV version of the warden, because the show isn't always a faithful adaptation. In fact, there was another character in the CW Flash (co-producer, 46 episodes: Jennifer Lence) named Warden Gregory Wolfe who was a psychologist who treated Jesse James. (This version was played by Anthony Harrison.) Still, it is worth seeing what Warden Wolfe did in the comic books to try and predict what he'll do next on the show, especially since this new iteration seems to fit the comics mold much better.

He first appeared in Flash: Iron Heights, which was published in August of 2001. Gregory Wolfe in the comics is a powerful warden obsessed with controlling the prisoners in his care, no matter the pain it causes them. He's also a metahuman in the source material; on TV, his status is still unclear.

On the TV show, the warden appears to move Allen into a cell that can actually contain him, which could be the one created by the first Warden Wolfe for James. This lines up with the comics. Both TV Wolfe and comics Wolfe have some understanding that a regular prison can't contain a metahuman.

But back to Warden Wolfe's own uncertain metahuman status, because it will definitely play a role in the next episode one way or the other. Warden Wolfe is a metahuman in the comics with the power of "biokinesis." This means, that Wolfe can control others' muscles, causing spasms and potentially incapacitating them with muscle pain. There is no evidence yet that the TV warden has powers, since he captured Barry by drugging him through his favorite snack, though this would be an interesting twist. The show's warden isn't just obsessed with controlling metahumans like he is in the comics, but also seems to be using them in a business venture with Amunet Black.

Amunet Black, who we were first introduced to in the episode '"Girls Night Out," is a metahuman who can control metal and has collected a dangerous ring of metahumans to work for her. Katee Sackhoff, who plays Black on the show, spoke to Comicbook.com about the future of her character. She had this to say about Black, long before the warden storyline was even introduced:

"I think that Amunet has some big plans coming up. But she also is a survivalist. So if that gets threatened, you never know...As long as they continue to put her in crazy places, I’ll show up. I absolutely love this character. I think she’s so much fun."

It seems the return of Black has been in the works for quite some time. She's a dangerous character who may have been overlooked earlier, when it seemed that she was defeated. Sackhoff also gave Comicbook.com insight into the root of Black's motivations, which may come into play with her warden storyline. She said:

"I don’t think that Amunet is inherently evil. I just think that she is a businesswoman and she’s an opportunist. And right now, she just is mean. And will kill you. But she also really enjoys her job, you know? I mean, that’s the thing that I love about her, is that she’s evil because she likes it."

The specifics of Black's business venture with Warden Wolfe hasn't been revealed fully, but this appears to be a departure from his comic book storyline. While the Warden Wolfe and Black's motives are mysterious, storyline, the promo for Tuesday's episode does involve Barry teaming up with all the past metahumans he captured in the first part of the season. Wolfe seems to be connected with these initial antagonists — the bus metahumans.

All this points to the TV Warden Wolfe being somehow involved in the season-long arc involving The Thinker. Team Flash had better hope for some answers soon, because there's no hope for the good guys if they don't even know what the bad guys are planning.

More like this
Netflix Shut Down 'Bridgerton' S3 Rumours About A “Very Dark” Storyline
By Bustle
This 'Gossip Girl' Wardrobe Error Has Gone Viral On TikTok
By Alyssa Lapid
'The Last Of Us' Has Officially Been Renewed For Season 2
By Darshita Goyal
Turns Out George Clooney Is A Huge Fan Of This Classic British Game Show
By El Hunt
Get Even More From Bustle — Sign Up For The Newsletter
From hair trends to relationship advice, our daily newsletter has everything you need to sound like a person who’s on TikTok, even if you aren’t.