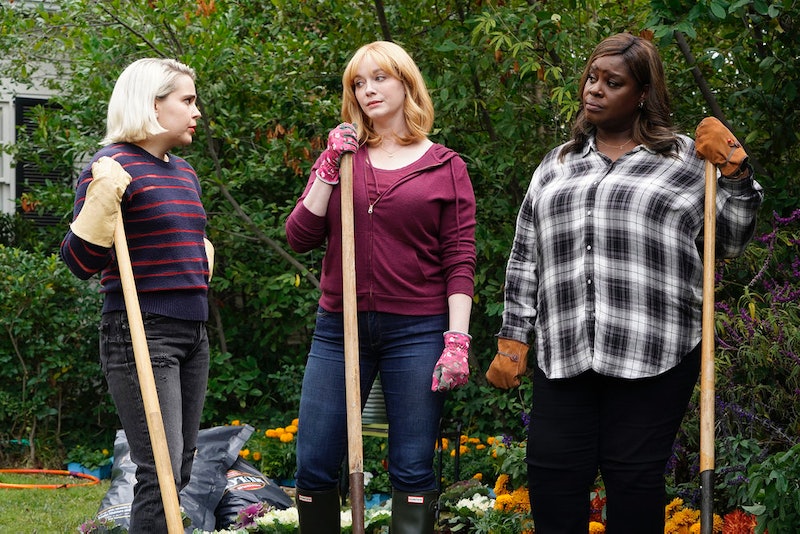 Spoilers ahead for Good Girls Season 2, Episode 11. Beth on Good Girls may be a good criminal, but she's not such a great detective, considering that she buries a whole body in her yard without realizing whose it is. Confused? Let's back up.

In the May 12 episode, Rio begins sending Beth pieces of a body. She assumes they're from Boomer's body, which Beth, Ruby, and Annie had previously disposed of after Mary Pat killed him. Beth, Annie, and Ruby decide the best way to get Rio off their backs is to find the body so he can't blackmail them anymore. They then discover that, before his death, Boomer set up a deal for hunters to store their meat in the grocery store's freezer for a fee. Only it's not just deer in there anymore. Annie finds a body in the freezer and assumes it must be Boomer's, and that Rio had stashed there. The body is all wrapped up, so she can't (and doesn't) confirm this assumption.

The three women proceed to bury the body in Beth's garden (because the police are never gonna check there), which is almost as bad as when Beth grinds up the body parts Rio sent her in her garbage disposal. Girl, there is so much evidence in your sink pipes now. Naturally, the body doesn't stay buried for long, because a neighbor's dog begins digging at it. Beth shoos the dog away, but not before realizing that some of the plastic has been punctured and the hair on body is long and black — so, uh, not at all what Boomer's short, blonde hair looked like. This is a whole other person entirely.

But whose body is it? That's hard to pinpoint considering that it may not have even been Rio who was storing that body in the freezer. There could be a different killer in town. The long hair makes it seem like it's potentially a woman, which isn't really in line with the gang hits for Rio's group, but who knows?

The next episode (airing May 19) is called "Jeff," which seems to suggest the body belongs to this Jeff person. But according to IMDb, actor Conor Duffy is playing Jeff, and he definitely doesn't have long black hair IRL. (Maybe his character has a wig?)

The episode synopsis for "Jeff" says:

"Mary Pat resurfaces in the women's lives as they try to make sense of a shocking discovery Beth has made. Meanwhile, Beth and Dean have an important family talk with the kids, and Annie and Noah try to work through their problems.

Perhaps Mary Pat can shed light on who the body belongs to? The last one the ladies had to deal with was also her fault, since she killed and chopped up Boomer. Maybe she did that again?

In any case, it was a terrible idea for Beth to bury an unknown body in her yard (or even a known body), and she needs to be way more careful. The FBI is already hot on her case for pills, counterfeit money, and murder. She's basically handing them all the evidence herself.

More like this
'House of The Dragon' Episode 6 Will Take Place A Decade After Episode 5
By Kadin Burnett
The ‘Emily In Paris’ Season 3 Release Date Is Here, Plus The First Footage
By Bustle Staff
The ‘You’ Season 4 First Look Shows Joe’s New Identity And Potential Victims
By Bustle Editors
Devi Is Going To Meet A “Smoldering Bad Boy” In ‘Never Have I Ever’ Season 4
By Jack Irvin and Gabrielle Bondi
Get Even More From Bustle — Sign Up For The Newsletter