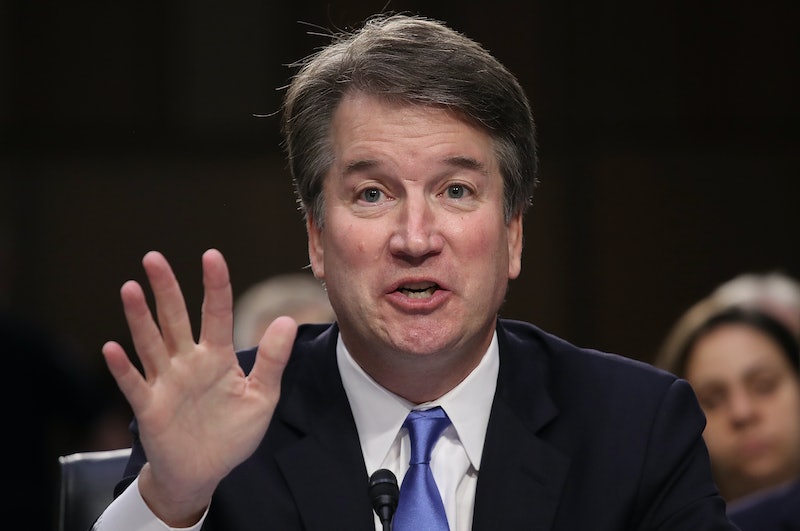 Dozens of protesters were arrested on Tuesday for disrupting the first day of Senate hearings to determine whether or not President Donald Trump's latest Supreme Court nominee should receive a lifetime appointment to the bench. Along with fears about the future of the country, Shaunna Thomas protested Brett Kavanaugh's confirmation hearing for young girls like her daughter — and was ultimately detained by U.S. Capitol Police for four hours.

"I believe it’s possible to be successful, but only if we are willing to put our own bodies on the line, and that’s what I had to do yesterday — not just for myself, not just for UltraViolet members, but frankly for my daughter," Thomas, executive director and co-founder of the women's advocacy group UltraViolet, tells Bustle of protesters' efforts to block Kavanaugh's confirmation.

Thomas was about the tenth person to stand up and shout from the back of the hearing room. A total of 22 people from Ultraviolet, the Women’s March, and other activist organizations were arrested for disorderly conduct during Tuesday's confirmation hearing, Capitol Police told The Hill.

The first protests actually came from Democratic senators concerned about what they considered a lack of transparency involving documents on Kavanaugh's record. But the Senate Judiciary Committee's chairman, Sen. Chuck Grassley (R-IA), was eventually able to proceed with the hearing. That's when Thomas and her fellow protesters stepped in.

"At that point, we knew that the only thing that we had left to do was to try and delay the proceedings — to try to interrupt what was happening — to make this crucial point that this is not normal, that this is a sham process," Thomas says.

After a handful of other activists had already been escorted out of the room, Thomas stood up and yelled: "Senators, on behalf of the millions of women across the country whose rights will be stripped by a Kavanaugh court, I demand you reject this nomination."

Thomas tweeted that she was taken to a warehouse near the Capitol after she was ushered out of the hearing room. She was released after roughly four hours.

Like Thomas, activists have voiced concerns that Kavanaugh's confirmation to the Supreme Court could drastically impact Americans' reproductive rights, voting rights, and environmental protections since the day his nomination was announced. But she tells Bustle that this isn't a partisan battle, but rather, it's that everyday Americans are "seriously scared" about the possibility that Kavanaugh would diminish people's rights if he makes it to the high court.

"We’re talking about rolling back policies that have made my life, my success possible. What he represents is a return to a 1950s-60s era where women could not be and do whatever they wanted to be or do," Thomas says. "And the idea that my daughter won’t have same the same opportunities I did, or the same options as I did, is wholly unacceptable to me."

Following protesters' disruptions on Tuesday, Capitol Police temporarily blocked off the hearing room seats reserved for the public on Wednesday, PBS Newshours' Lisa Desjardins reports. Desjardins later tweeted that the public was allowed back in the room and that protesters "seem to make up most of the public here." Many were reportedly shouting "vote no!" and "the people dissent!"

While Thomas says she didn't look forward to having handcuffs slapped around her wrists, she felt she had a duty to her daughter to show up on Tuesday.

"It was my daughter’s first day at school and I missed it. But I had to miss it because what is at stake for women is... why I think so many people this week are showing up," she says. "We have to be able and look back on this and say we did everything in our power to stop it."