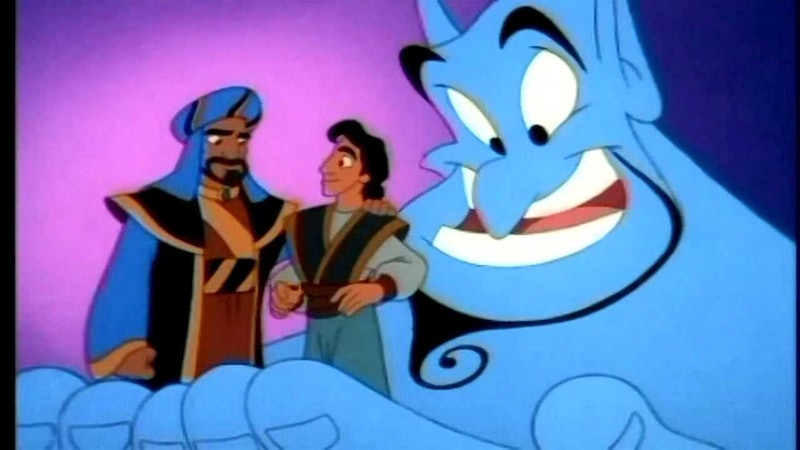 There's no doubt that the original animated Aladdin, which hit theaters in 1992, is a beloved film etched in the memories of many millennials, as well as an important entry in the '90s Disney Renaissance. Many fans are probably planning on an Aladdin rewatch before the new live-action version opens on May 24, but if I could I'd like to add another movie to your list: Aladdin and the King of Thieves, which is available to buy on Amazon or Vudu. It didn't get the respect it deserved when it came out, but as it offers up a hilarious reunion with beloved characters, this direct-to-video sequel deserves a revisit.

Based on the tale of "Ali Baba and the Forty Thieves" from One Thousand and One Nights, 1996's Aladdin and the King of Thieves focuses on the upcoming wedding of Aladdin and Princess Jasmine (returning voice actors Scott Weinger and Linda Larkin). But as Agrabah prepares for a new prince and the festivities are planned, Aladdin finds himself a bit nervous. He doesn't know how to join a family because he's never had one, and he doesn't know how to be a father because he never knew his own. Meanwhile, the 40 Thieves plan to attack the wedding to steal all of the gifts. But Aladdin eventually learns that his father is in fact alive and is the King of the 40 Thieves, and, with the help of the Genie, he must free him so they can reunite as a family.

Aladdin and the King of Thieves is a part of a very interesting trend that began in the '90s after the success of movies like The Little Mermaid, Beauty and the Beast, and The Lion King. Beginning in 1994 with Aladdin's first sequel, The Return of Jafar, Disney mined for gold in every side plot, supporting character, or flashback to create a number of direct-to-video prequels and sequels, like Beauty and the Beast: The Enchanted Christmas, in which all of the enchanted characters are still household objects, or The Lion King 2: Simba's Pride, which basically uses the same conflict as The Lion King, only this time focusing on Simba and Nala's daughter. Before Disney turned to live-action remakes, the direct-to-video sequel was a profitable side gig.

But all of these direct-to-video movies featured animation that was of lesser quality than the originals — probably because the production was rushed to capitalize on the success of the originals — and some are actually pretty bad. For example, Pocahontas 2: Journey to a New World continued the original's problem of brushing over actual history to tell a love story. Others, like Tarzan II and Mulan II failed to capture the magic of their predecessors.

The first Aladdin sequel, 1994's The Return of Jafar, falls low on the ranking of these direct-to-video movies. First of all, the story was repetitive. Jafar may have been a formidable villain in Aladdin, but his quest for revenge was tiring. Not only that, but unfortunately, Return couldn't get Robin Williams back to voice the Genie for this one, opting instead for Dan Castellaneta, who's also the voice Homer Simpson. Half of the magic of Aladdin came from Williams's ability to improvise and do impressions, which adds much of the comic relief to an otherwise straightforward hero's journey.

Thankfully, Disney managed to lure Williams back to the land of Agrabah for the 1996 sequel. Per The Los Angeles Times, Williams reportedly got $1 million salary for King of Thieves. So if you love his performance in the original and haven't checked this one out — or rewatched it recently — you're missing out on some of his funniest bits as the Genie, from his commentary on wedding guests in the style of Lifestyles of the Rich and Famous, to expertly crafted impersonations of Sly Stallone and Walter Cronkite, to an adorable Mrs. Doubtfire gag. The actor's return puts King back in the realm of the original Aladdin when it comes to humor and heart, and with the help of an interesting story, it's safe from Jafar territory.

But there's also another reason why King of Thieves is one of the more worthwhile Disney direct-to-video sequels and that reason is Aladdin's hot dad. Yes, you read that correctly. Aladdin's dad, Cassim, voiced by John Rhys-Davies, is hot. The fact that we may find animated characters attractive will always be a weird little element of our humanity, though a very normal one that usually pops up during childhood.

And who knows? If the new live-action Aladdin does well, perhaps we'll get a live-action version King of Thieves too. The Return of Jafar, we can skip.