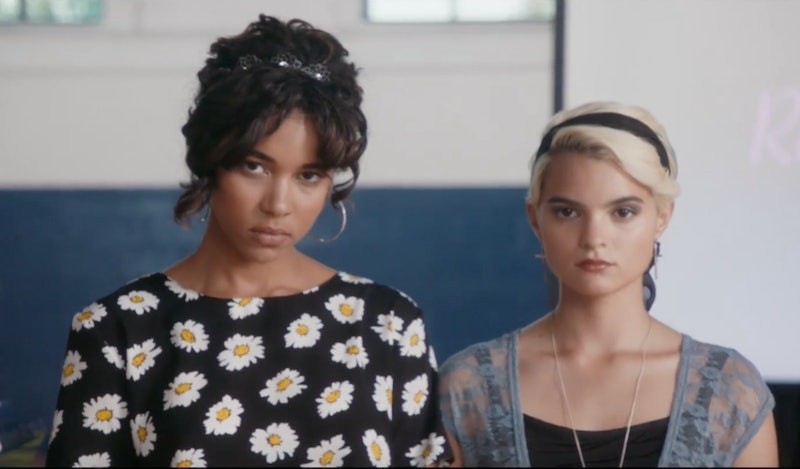 True crime is everywhere right now. Look at any online streaming platform and you'll see a plethora of options for how you can get your daily fix of murder and the investigations that follow them. Last month, Netflix's original series American Vandal tested how far audiences would go to witness the true crime formula when it parodied the genre in a high school investigation of a serial spray painter of male genitalia. The show's popularity confirms people are still obsessed with all things true crime, and love it even more when satire is involved — which is why you need to add the new movie Tragedy Girls to your must-see list ASAP.

Like American Vandal, Tragedy Girls' protagonists are high schoolers caught up in the social hierarchies and stereotypes that teens swear by. Both movies are also intelligent comedies, due to their satirizing of teenage antics with which everyone is familiar. While American Vandal mainly pokes fun at the "class clown" and the "nerd" clichés, Tragedy Girls, which hits theaters October 20, features two cheerleaders who will do whatever it takes to be popular, including secretly murder a bunch of people and then write about it on their social media accounts for attention. The movie's focus on the two popularity-obsessed teens, who together make up the blog "Tragedy Girls," reveals the twisted ways people obsess over social media likes and followers, as well as the the way everyone has become so infatuated with true crime in recent years.

The movie's central cheerleaders aren't the only high school stereotype that Tragedy Girls parodies though, and in fact, they're actually not really even stereotypical as they claim their stake as the "in crowd" by murdering people and getting revenge.Tragedy Girls is most certainly one of a kind, and the more ruthless parodying of stereotypes is actually reserved for the cocky male characters. In an exclusive clip from the film, Josh Hutcherson plays the popular guy who tries really hard to make everyone think he's deep — and the worst part is that it works. Ugh, high school, right?

After Hutcherson's character mansplains to his ex, played by Alexandra Shipp, how she should live her life, Brianna Hildebrand's character darkly proclaims, "We so need to kill him." What follows, according to the trailer, is an over-the-top, grotesque bloodbath as the high school bloggers turn from solving true crime to committing true crime in order to maintain their popularity.

It doesn't hurt that they're getting revenge on people like Hutcherson's character, who refuses to "do shoutouts" to help them because it's not "his brand." This social media-based language is exactly what makes Tragedy Girls so good, and so spot on — we all know real-life teens are as into their own social media branding as they are the immature but hilarious antics shown in American Vandal.

Even though drawings of dicks and social media "likes" might seem inconsequential, everything is so magnetized in high school, and that's what makes it such fertile ground for comedy. Tragedy Girls takes seemingly meaningless things and makes them actual life-or-death situations that are both hilarious and serious because, well, these cheerleaders — and actual serial killers — are really murdering people.

It wouldn't be a big surprise if Tragedy Girls becomes a cult favorite due to its unique approach to forever-beloved high school movie conventions. Along with American Vandal, the new film is ushering in an era of true-crime parodies, and it will be exciting to see where this new genre goes. Based on what's come out so far, it seems a lot of mystery and hilarity will come.

More like this
Mike Flanagan Teases 'The Midnight Club' In This Exclusive, Creepy Clip
By Grace Wehniainen
Lindsay Lohan & Jonathan Bennett Celebrated Mean Girls Day Very Differently
By Jake Viswanath
20 Photos Of The 'Hocus Pocus' Cast Then & Now
By Radhika Menon
12 ’90s Movie References You Missed In 'Do Revenge'
By Radhika Menon
Get Even More From Bustle — Sign Up For The Newsletter